I’ve kind of run out of interesting restaurants within close proximity of my work place so I’ve been branching out to the relatively close Sapperton area of New Westminster lately. While I’ve driven down East Columbia many times in the past, I’ve never noticed Ikoi Sushi before… probably because it’s located at the far end of a tiny strip mall.

The inside of the restaurant isn’t large but it’s also not extremely busy during lunch on the weekdays. That’s not to say they don’t have any patrons. In fact, from all indications during my visit, they have a loyal following and some of the customers order by saying, “I’ll just have my usual.” 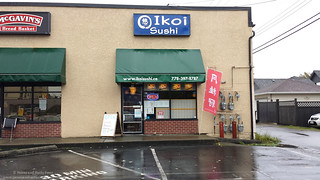 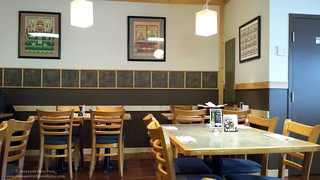 On my first visit, I ordered Lunch Special D with Chicken Karaage ($11.95) and an order of Spinach Gomaae ($3.50). The spinach was pretty good with just the right amount of sauce. My lunch special came with 3 pieces of tuna sashimi, 2 pieces of salmon, and 1 piece of surf clam. The sashimi was quite good… it was cold but not frozen and both the tuna and salmon were buttery soft.

The four pieces of fried chicken had a moist interior after you got past the slightly crisp exterior. The box also came with a relatively large salad, rice, and an orange slice. At first, I was a bit disappointed by the orange slice but I did appreciate the fact that they partially pre-peeled it. 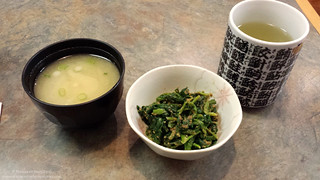 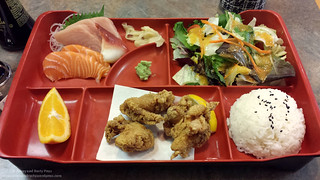 I decided to come back the next day and see if the rest of their dishes were as good as on my first visit. This time, I picked the Zarusoba ($6.50) which is a buckwheat noodle that’s served cold and topped with shredded nori seaweed. It’s served on a sieve-like tray called a “zaru” and accompanied by a small container of tsuyu dipping sauce with wasabi and scallions and you eat it by dragging the noodles into the dipping sauce. The noodles were well prepared with a slightly chewy texture. This makes a really refreshing dish during hot days (don’t ask me why I ordered it in late fall).

I also ordered the Ebi & Hotate Battera ($11.95) which is a pressed sushi made with alternating shrimp and scallops. Unlike aburi-type sushi that you find at places like Miku or Minami, battera isn’t seared on top. I thought that the scallop was pretty tasty but the cooked ebi (which had a bit of avocado within the pressed rice) was lacking. I also thought that the rice seemed slightly too tall but that might be just nit-picking. 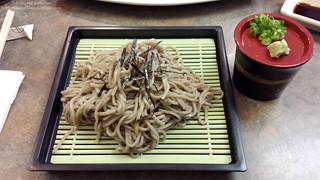 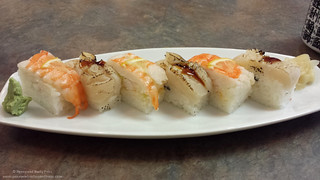 If you’ve read my blog before, you probably know that something always seems to go wrong when I go out to eat… well, on my second visit here, the power went out in the restaurant – it wasn’t their fault… it was a windy day and it looked like the power went out for the whole block. Fortunately, it was lunch time so there was still light coming in through the window. Also, since my food already arrived, I just continued with my meal. The power eventually came back on before I finished my meal, which was also a good thing, because I ordered some food to go.

The Spicy Salmon Sashimi ($5.95) was good but a little bit on the small side. I added their signature Ikoi Roll ($11) which was visually pleasing (even after bringing it home). It was a salmon and avocado roll wrapped in a pink soy bean wrapper and topped with chopped scallops and crispy bits. 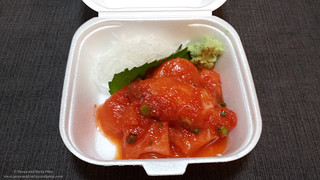 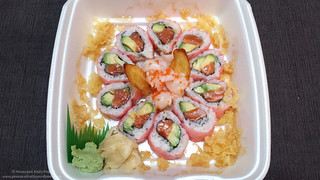 I enjoyed the boneless Chicken Karaage that I had on my first visit so I picked up an order of this ($5.95) along with the Oyako Don ($7.95) which contains both chicken and egg. The donburi was pretty decent but not the best once that I’ve had (could have used some more onions and sauce). 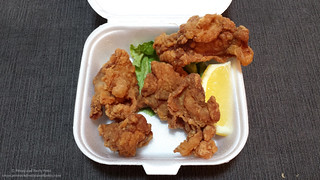 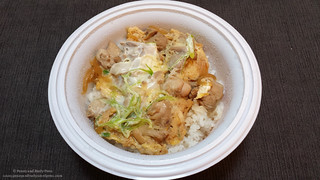 The food is mostly above-average with some items standing out more than others. It’s also Japanese-run, if that matters to you.