Cafe Zen is a popular breakfast eatery located in the Kitsilano area of Vancouver. It’s so popular that I was a bit worried about having to wait in line. Thankfully, on my Friday morning visit in late October, while the restaurant appeared bustling, I was able to grab a table without waiting.

The place is seat-yourself and has a homey feel… right down to the checkerboard tablecloths. While the sun was thankfully shining outside, the weather was still a bit nippy so I opted for a Hot Chocolate with Whipped Cream ($3.99). Okay, let’s be honest… even if the weather was warm outside, I’d probably order a hot chocolate with whipped cream. 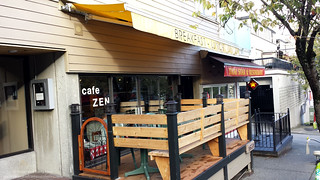 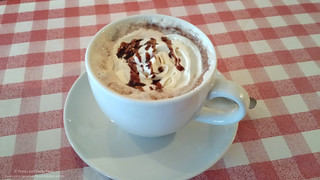 I had forgotten to ask for my eggs to be soft poached so I was rather relieved that what arrived to the table was pretty good… somewhere in between soft and medium poached. The eggs seemed oddly uniform in shape – I wonder if they use some kind of mold? As for taste, the crab benedict was good with plenty of crab meat. I wasn’t so thrilled with the chopped up chorizo sausage but perhaps I should have picked something else. Also, the English muffin was too soft for my liking. On the other side, the hash browns had a perfectly crispy exterior. 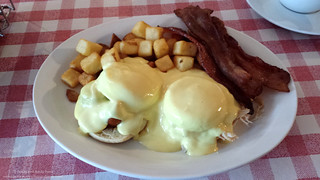 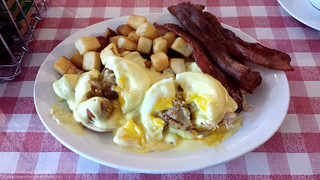 Meanwhile, the four bacon rashers weren’t limp but they weren’t super crispy either… I think they might have been overcooked a little as they wound up being more hard and difficult to chew instead of being simply crisp. As for the hollandaise sauce – at first, I thought it was pretty good. But the eggs were literally smothered in the sauce and the richness of the hollandaise started to become too much.