When I think about “The Drive”, I immediately think of Italian food. I guess that’s because growing up in the neighbourhood, you couldn’t walk a block down Commercial Drive without smelling the aroma of pizza or seeing the green, white, and red flag of Italy proudly waving from the stores.

Over time, a number of different cuisines started to pop up including Mexican, Indian, Vietnamese, Cuban, Carribean, and Japanese. Now, while Kishimoto is technically on The Drive, it’s further south… pretty close to the place that Shanghai Palace used to be located 30 years ago at the corner of Commercial Drive and McSpadden Avenue (where Timbre is located now). 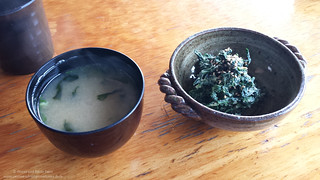 Kishimoto is a busy spot… even around 2pm on a weekday. When I arrived, I was fortunate enough that a table by the window opened up so I was seated immediately. If you do find there’s a line up, make sure you put your name down on the list. They had quite a number of rules posted regarding seating and the name list – I suppose they’ve had problems in the past.

I started out my lunch with the Spinach Gomaae ($4.75). Some restaurants use a peanut sauce with the spinach but Kishimoto uses a miso sauce with sesame on their boiled spinach. I think it could have used a wee bit more sauce as the spinach tasted kind of dry. The Miso Soup ($1.95) is an excellent choice on a cold day and Kishimoto’s version had quite a bit of seaweed in it.

Oshi sushi is a type of pressed sushi that is growing in popularity in Vancouver. Unlike the usual nigiri sushi that you can find in all sushi places, oshi sushi is shaped in a mold to give it the characteristic block shape. Kishimoto has a Salmon Oshi Sushi dish ($12.95) that’s prepared similar to the aburi-style sushi found at Minami and Miku with the salmon seared with a flame. The dish itself has excellent presentation value. Everything from the tea light candle encased in a thin daikon wrapper to the elaborate pinwheel garnish using edamame beans and daikon sheets made for a memorable meal.

As for the taste, it was pretty good. The jalepeño slice on top of the salmon had a slight kick that cut through the creamy sauce and grows as you continue eating. Perhaps not as good as the ones that we’ve had at Minami or Miku but definitely above-average and cheaper to boot. 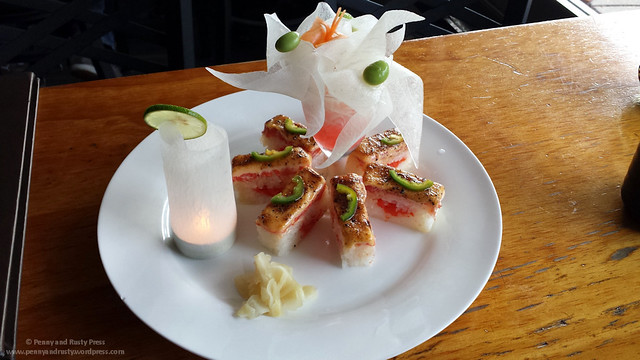 The Ebi Chili Mayo ($8.95) was a bit of a disappointment to me. That’s not to say it was bad but it just wasn’t something that really appealed to me. The 5 prawns were a bit on the small side and I felt that there was too much batter. It didn’t help that the prawns were curled up since this seems to have made the batter form in larger clumps. 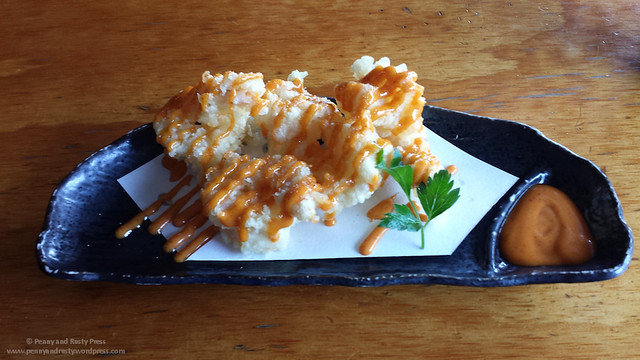 I noticed that they had Yuzu Ice Cream ($4.95). Ever since having an amazing Aburi Yuzu Salmon Sashimi at Hyoga Japanese Cuisine, I’ve been ordering yuzu dishes wherever I find them. I have to say that the Yuzu ice cream was the best part of my meal. It’s a small scoop but the lime-like citrus flavour is very light and refreshing. 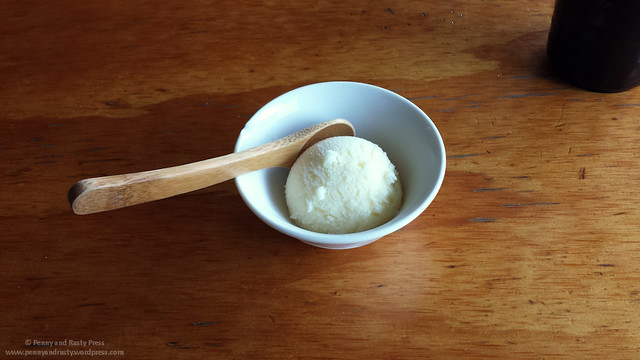 Overall, the food was above-average for a sushi restaurant and the prices tend to represent that as well. Service wasn’t very attentive and I didn’t get my tea refilled until the very end of my meal. I did enjoy the availability of certain items that you just don’t see in most of the run-of-the-mill Japanese restaurants in Vancouver such as the yuzu ice cream.