Does anyone remember those Pizza Hut frisbees that they used to give away back in the 70’s? That was back when most of the Pizza Hut locations were dine-in restaurants with the distinctive “hut-like” roof.

Since then, many smaller Pizza Hut locations opened up but mainly focused on the take-out business. The Pizza Hut located on the corner of Kingsway and Gilley in Burnaby is one such take-out location. Although they have a tiny counter area, it’s not somewhere where you can enjoy a sit-down meal with your family. Plus, the parking lot (which they share with a Church’s Chicken and a dry cleaners) is tiny and always full.

I saw the ads on tv for their recent specialty pizza, the Crazy Cheesy Crust, and thought it looked pretty cool. Similar to a stuffed-crust pizza, the Crazy Cheese Crust goes the extra distance realizing that the crust isn’t enough to contain the amount of cheese that patrons crave. Instead, they pinch the edges of the pizza to form 16 wells to hold copious amounts of their melted five-cheese blend. In fact, it kind of looks like a cheese-filled moat that surrounds the inner part of the pizza.

We picked the Crazy Cheese Crust Supreme ($21.99) as well as a regular order of Garlic Cheese Bread ($4.55) and the regular size of the Bacon Mac ‘n Cheese ($11.95) with Cheese Bread Sticks. First off… um… where’s the macaroni in the “Mac” ‘n Cheese? I know it’s a little thing but if you call something “Mac” ‘n Cheese, people will expect it to have macaroni. Instead, they use rotini pasta that is oven-baked with bacon and pizza mozzarella. The pasta was okay but it was dry because it was oven-baked and tasty a bit too salty. 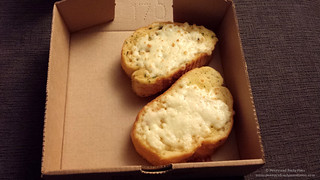 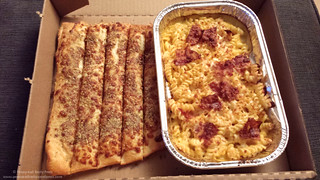 As for the Crazy Cheese Crust… it didn’t look anything like it did on tv… but I guess that applies to everything you see on tv. I was specifically looking forward to pulling one of the cheese wells apart and seeing that characteristic ooey-gooey cheese string that stretches the length of my arm. Alas, the cheese had congealed and I felt robbed that I wouldn’t enjoy the same cheesy goodness that I saw on the television ad.

I will say, however, that I heated up a left-over piece of pizza the next day and the cheese melted and I finally got my cheesy pull-apart. I guess you just need to make sure you eat the pizza when it’s hot out of the oven. 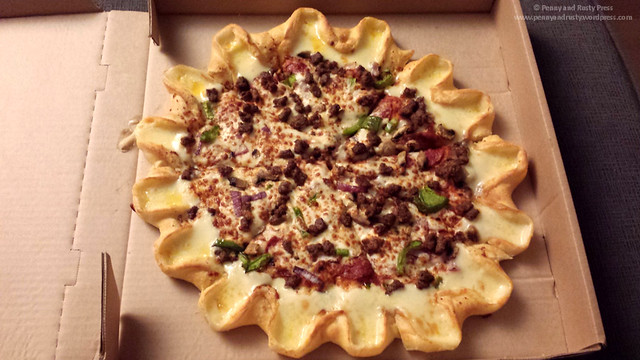 While I still think that Pizza Hut’s not as good as it used to be, I have to admit that their online ordering system was very efficient. If you do wind up ordering the Crazy Cheese Crust, do yourself a favour and make sure you have it heated up to melt the cheese first. Yes, it’s oily and artery-clogging… but it’s not like you’re coming here for healthy food.