What, pray tell, is behind the blue door? Well, we’re in Vancouver so the odds are it’s a Japanese restaurant.

Sure enough, Aotoya Blue Door is a Japanese restaurant, but it’s not your regular sushi joint where you can get countless sushi rolls with cutesy names. In fact, aside from the California roll box on their dinner menu, there wasn’t mention of any sushi rolls at all. There were about ten different rolls listed on their lunch menu so I’m not sure if they offer sushi rolls at dinner time (perhaps their sushi chef doesn’t work at night).

The inside of the restaurant is rather dated and homey-looking. They have hand-written menu items on the wall (which is odd because they were mainly for the same items already listed on the menu). Speaking of their limited-menu… I ordered the Mixed Sashimi Dinner Box with Chicken Karaage.

On the bad side, the sashimi wasn’t very appetizing. The tuna tasted a bit mushy and the salmon pieces were pathetically small (it almost looked like trim pieces). But since the salmon sashimi wasn’t much better than the tuna, it wasn’t a total loss. The deep fried special item was two veggie spring rolls that tasted a bit doughy and weren’t that good.

The tempura was a mixed lot. On the one hand, the carrot, broccoli, and onion pieces were okay. But the 2 prawn tempura didn’t taste very fresh.

On the plus side, the seaweed salad and the green salad were both fresh and tasty. The miso soup (which they initially forgot to bring) was interesting in that there was more than the usual tofu and seaweed in the soup. I actually liked how the simple veggies added to the soup turned out. But the best part of the box was the karaage. The six small pieces of boneless chicken were both meaty and moist with a slight crisp to the exterior. 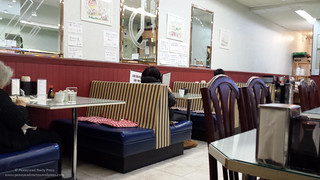 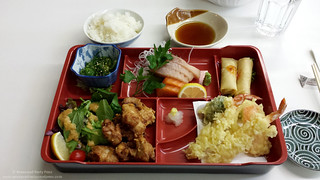 As for service, the food took a long time to arrive (about 40 minutes) and there was no table service aside from taking my initial order and delivering the food when it finally arrived.

I ordered an Oyako Don ($9.95) to go and, I must admit, it was pretty good. The chicken, egg, and onions were perfectly cooked and was both filling and satisfying. 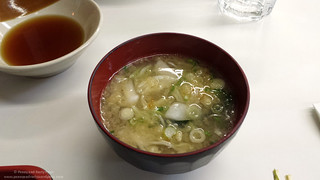 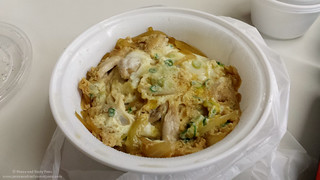 Overall, I would say the dishes are hit-and-miss. I would come back for their chicken karaage and oyako don and maybe to try some of their teishoku combos like the mackerel.