Not all ginger is the same. The proponents of ginger state that young ginger tends to lower body temperature (useful for hyperthyroidism or fevers) whereas old ginger raises body temperature. Truth be told, however, I didn’t plan on visiting Old Ginger on this cold December day.

Instead, I had planned on finally visiting Peaceful Restaurant a few doors down. As it turns out, however, Peaceful wasn’t open despite the hours posted on their door indicating that they would be open (they did eventually open after I finished my lunch at Old Ginger).

I’m not sure if it was because Peaceful opened late, but I found Old Ginger was quite busy at lunch. They have lunch specials on a separate menu (make sure you ask for them because they didn’t give one to me). The interior is fairly basic with some splashes of dark reds in the tablecloths and on the walls.

I ordered the House Special Crispy Noodles ($11.98) and the Shanghai Style Juicy Pork Buns ($3.98). The noodles had a pleasant amount of toppings but was mainly consisting of slices of fish cakes. In addition to some tender squid pieces, the toppings were comprised of shrimp, broccoli, carrots, bamboo, bok choy, and bbq pork. I found that the dish was a bit too saucy and didn’t have enough crispy noodles.

The Xiao Long Bao were fairly small in size and the wrappers weren’t exactly thin. Moreover, they really weren’t too juicy. 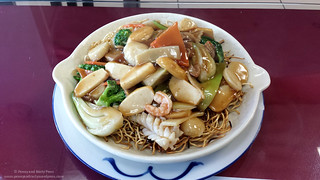 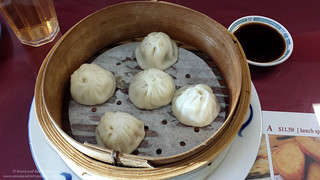 The place reminded me of that Diner Dash game as there was only one waitress who hurriedly tried to serve all of the tables as the kitchen kept “dinging” the bell to indicate that there was another dish ready for pick up. All in, the food was okay… nothing terribly wrong but nothing really great either.