Indian Wok is an Indian-style Chinese restaurant (or is it a Chinese-style Indian restaurant?) located on Kingsway, just east of Metrotown.

This is a tiny little restaurant and you can hear the cook furiously wok-frying their food in the kitchen. The lunch specials are pretty good value but the dishes are on the smaller size. I ordered the Peppering Beef ($6.99 lunch special) which comes with your choice of soup – I picked the Cream of Corn Soup. The soup had the characteristic thick viscosity but there wasn’t a lot of actual corn in the soup. Taste-wise, it was a tad on the salty side and I would have preferred some white pepper instead.

The Peppering Beef was served with onions, peppers, baby corn, jalepeño slices, and chili peppers in a rich brown sauce.  The beef was super tender and felt like it melted on my tongue. But the best part was definitely the sauce which had a healthy dose of garlic in it. 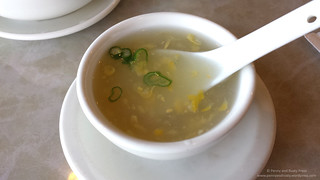 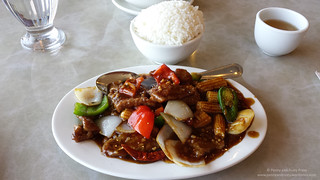 The dish was very saucy and that’s not a bad thing. I could have just eaten the sauce by itself over a bed of rice and been a happy camper.

I came back for lunch the following week and tried the Hot and Sour Soup with Fish Curry lunch special. I was hoping that the curry would be more like Indian curry but was disappointed to find it was a Chinese yellow curry. That’s not to say the dish was bad per se… it had plenty of pieces of fried, boneless fish in addition to cauliflower, onions, and peppers. I just prefer Indian-style curry. 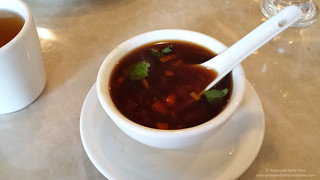 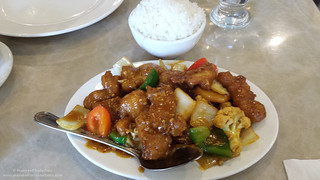