Pho Boi – A Taste of Vietnam

Pho Boi is a rather spacious Vietnamese restaurant on Kingsway that’s open 24 hours a day. I think it used to be Pho Hoa.

The inside of this restaurant isn’t like some run down hole-in-the-wall place, but it’s not the cleanest either. I ordered the Com Bo Nuong Cha Gio – C4 Grilled Top Round Steak Slices and Fried Roll on Rice ($11.25) for lunch and the food came out very quick. The soup which accompanied my meal came out hot but with very little flavour. It was reminiscent of the clear, oily broth that I had at Thai Cafe in Burnaby. 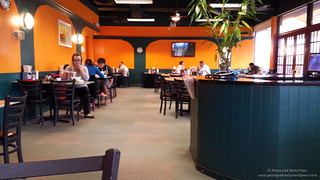 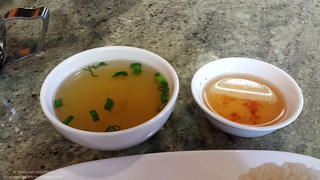 I found the fried roll (with ground pork, glass noodles, and veggies) was thin but crispy. I think they used Chinese spring roll wrappers instead of rice paper which made it taste more like a spring roll. It wasn’t bad, but not as good as it could have been. 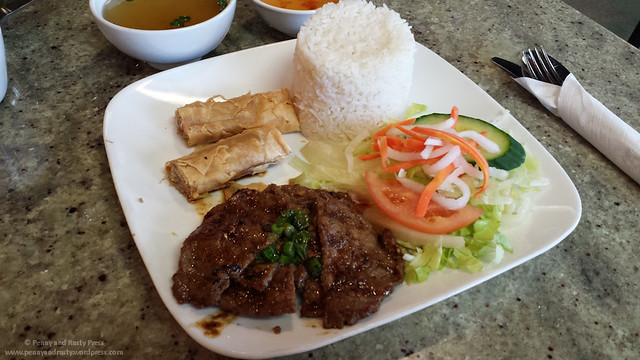 As for the steak slices, while there was a generous serving and the flavour was okay, I found the beef was a bit too chewy. Also, the pickled carrots and radish seemed to be missing that sweet-tart bite that I’m used to. While there were three servers working during my visit, service seemed to be lacking.

I decided I needed to come back and try out their noodle soups… specifically, their Bun Bo Hue ($9.45). 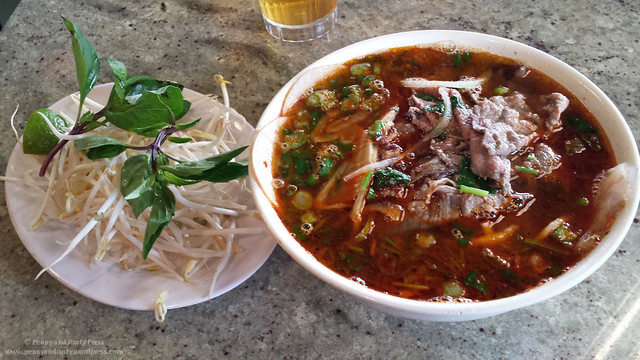 Not the best that I’ve had. The lime wedge was dry beyond recognition so it was useless in the soup. On the good side, the beef slices on the top were still slightly pink and the broth had a nice heat. However, I was a bit distracted with the texture of the noodles.