It’s been a few years since we last dined at Kyung Bok Palace in Lansdowne Mall. I remember our first few visits being not too bad (aside from the lack of service which was appalling even for an asian restaurant). We heard that their menu had changed and decided to give them another try… much to our dismay, the menu change hasn’t helped them.

At $21.95, their AYCE menu is fairly disappointing because it doesn’t include much. In fact, many of the items that you’d think would be included in the price requires you to pay more to add-on to your meal.

We did the math and decided to go with their à la carte menu instead. Their “Special Value Combinations” came with rice and soup. We tried their Spicy Seafood Tofu, Korean Soybean Paste, and Pork Backbone soups. Of the three, the best was the pork backbone and arrived with some tender meat attached to the large bones. The other two soups were wayyy too salty. 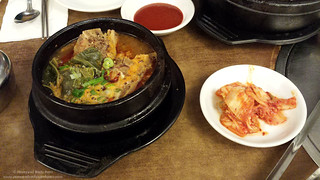 By the way, the banchan that arrived were just three small dishes (potatoes, kimchi, and one other item that I wasn’t sure what it was). Not the best… actually, not even average compared with other Korean restaurants.

We ordered the Marinated Tender Beef with Veggies ($12.95) – I suppose this dish wasn’t too bad but the beef itself was kind of chewy. 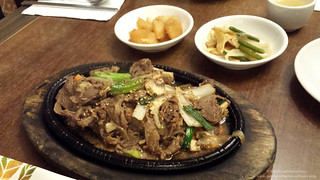 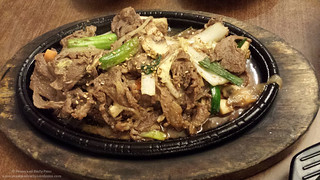 The Seafood Pancake ($15.95 for the large) was actually what most Korean restaurants consider a regular size. There really wasn’t much seafood in this pancake but it was filling because of all of the batter that they used. 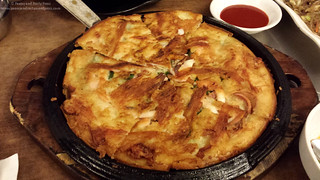 I found that the Seafood Japchae ($18.95 for the large) was a fairly plentiful dish. Although the noodles cooled down really quickly and turned into a big clump. The seafood didn’t seem that fresh either so we wound up picking through the dish a bit.

The Marinated Sliced Beef Short Ribs ($14.95) were also quite chewy and tough to bite through. 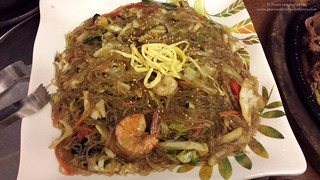 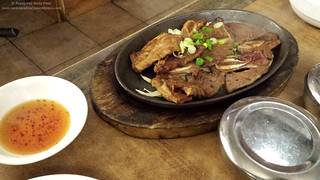 The Chicken Bibimbap ($12.95) is served in a stone bowl so there was a bit of crispy rice on the bottom. 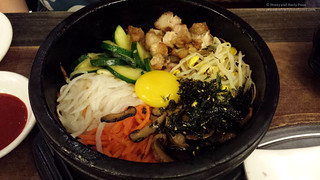 Overall, I found that most of the food items were sub-par and service hasn’t gotten any better.