Earnest Ice Cream has been the darling child of the ice cream business in Vancouver since they first opened. From the use of reusable pint-sized glass jars (returnable for a $1 refund) to the simple, yet original flavours, there’s not much that you could find fault with. 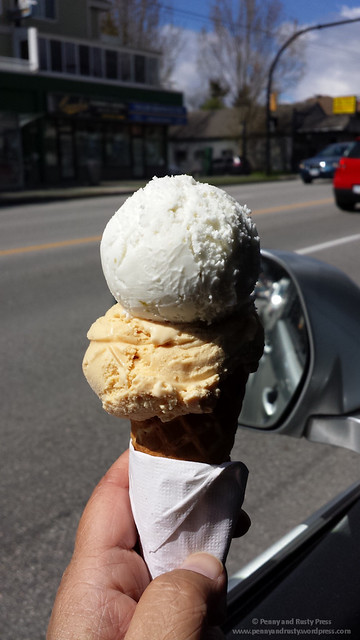 While we’ve had Earnest Ice Cream previously at Glenburn, we’ve never actually gone to their shop before. It was a sunny April day that we decided to visit their Fraser St. location and pick up a double scoop of Coconut Lime Sorbet and Salted Caramel ($7).

It is a bit expensive for ice cream but they don’t seem to have a lack of customers willing to pay for it.

The Coconut Lime Sorbet has a very subtle flavour despite the use of lime juice, lime zest, and lime oil. The Salted Caramel is one of their flavours that they’ve offered from the very beginning and one of the more popular flavours. Despite the name, this flavour isn’t overly salty. The caramel is super creamy and probably one of the reasons why people like it so much.

If you can’t make it down to their Fraser St. or Quebec St. locations, you can still find their jars of ice cream in select stores such as Nourish Market in North Vancouver.