Kin Kao Thai Kitchen is a tiny, minimalistic restaurant located on Commercial Drive. This is also mirrored by their limited menu offerings (they have 8 main dishes, all priced at $12). Due to the size of the restaurant, you can hear the food being furiously cooked in woks in the kitchen.

We started off our meal with an order of Chicken Satay ($7) marinated with coriander, cumin seeds, kosher salt, lemongrass, turmeric, galangal (which resembles ginger but tastes more like pepper), white pepper, and coconut milk. This is served with a very tasty homemade peanut sauce as well as another dipping sauce which had more of a spicy kick from chili peppers. The sauce makes up for the chicken being a bit dry. 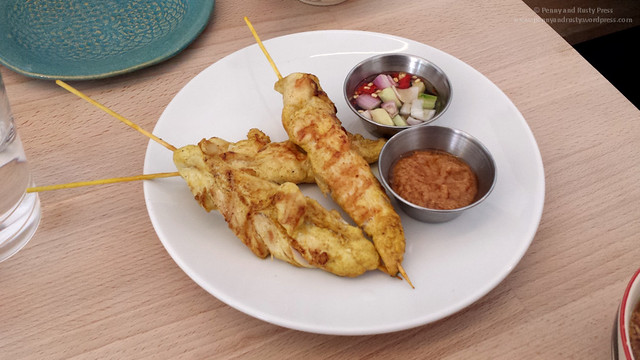 Our meal was accompanied by a simple vegetable broth… a bit too simple. 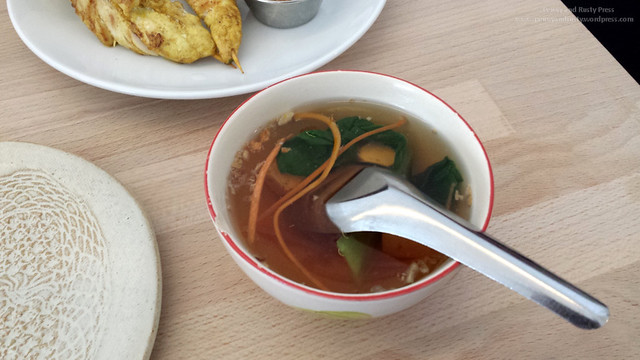 The Phat Thai ($12 + $2 for prawns) is their version of pad thai (basically a stir-fried rice noodle dish that is popular street-food fare). The dish contains all of the regular ingredients that you come to expect from pad thai, such as bean sprouts, chives, tofu, crushed peanuts, dried chili, egg, fish sauce, and tamarind. While I felt that this was a pretty good version, I thought that it could use a bit more wok heat to provide the complex flavour and texture I’m used to. 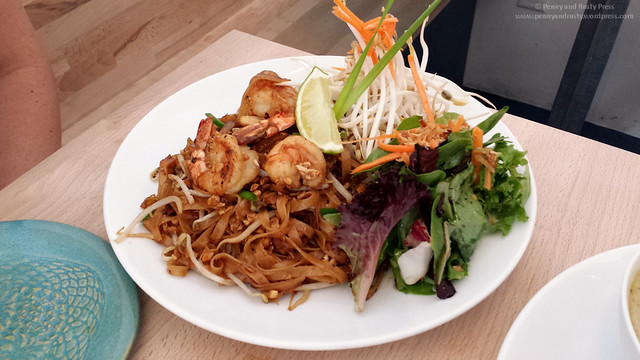 A staple dish that I always order at Thai restaurants is Green Curry Chicken ($12). I opted for the medium heat and, like the pad thai, it was pretty good. The chicken breast is served in a bowl with the coconut milk, garlic, chili, ginger, Thai eggplant, lime leaves, bamboo shoots, palm sugar, fish sauce, and Thai sweet basil leaves. I do appreciate that it comes in a bowl which allows me to control how I mix the sauce with the jasmine rice. While there was ample amounts of bamboo shoots, I felt that it could have used more eggplant (think I only saw 1-2 pieces). 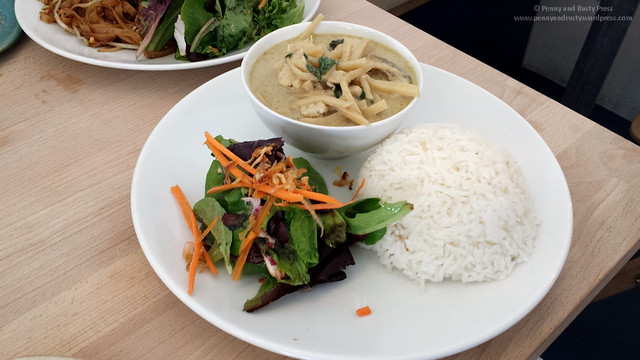 I’m a bit torn here… there’s some good aspects to the food here, but nothing that really shines compared with some of the other Thai restaurants around town. The visuals are spot on, and, it’s clear that they fill a void in the neighbourhood for Thai cuisine. A bit more refinement and this could be a real star.