This tiny little pizza joint is more geared for take-away service as they only have a small counter at the front. I ordered their Princess pizza ($30) which is described on their menu as containing shrimp, crab, and tiger prawns.

First off, I’m pretty sure there wasn’t any crab in the pizza. It did, however, have layers of smoked salmon on top. Perhaps they ran out of crab (which sounds strange)? In which case, you’d think they would have mentioned that they substituted the ingredients. 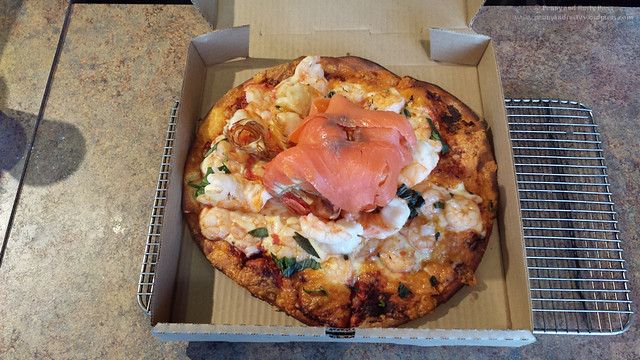 In any case, when the pizza arrived, I felt like I got punched by the aroma of seafood. The large tiger prawns were partially removed from their shell and used to create a tower that the smoked salmon sat upon. I must say that this pizza was very visually appealing.

That being said, it was equally difficult to eat or even pick up (heck, I couldn’t even close the pizza box properly due to the height of the tiger prawn tower). The pizza crust is super thin (which I generally like), but there was no way that I was going to be able to properly pick up a slice of pizza due to the weight of the toppings. The tiger prawns were really good and had a bouncy snap when you bit into them. There were also plenty of large shrimp covering the pizza.

As far as pizzas go, it’s not the best tasting pizza that I’ve had but the fresh seafood toppings were well prepared. To properly enjoy this, you need to eat it right away (a knife and fork would help) – it would be so much better if they actually had a place to sit down at a table to enjoy the pizza. I suppose summertime might be the best time to visit so you can bring your pizza to one of the nearby park benches.