Hi, Dozo Sushi. Okay, I admit that I used to think that your name meant that you were saying “Hi” to someone named “Dozo Sushi”. I don’t think that I’m too crazy… after all, you usually have a comma after the word “hi” and before someone’s name. As it turns out, “hai, dozo” roughly translates to “please, go ahead” or “go first” when you’re in polite conversation.

The inside of this restaurant, located in New Westminster directly across from Tamarind Hill, is pleasantly clean. They have dark wood tables and booths with a fake cherry tree by the door. 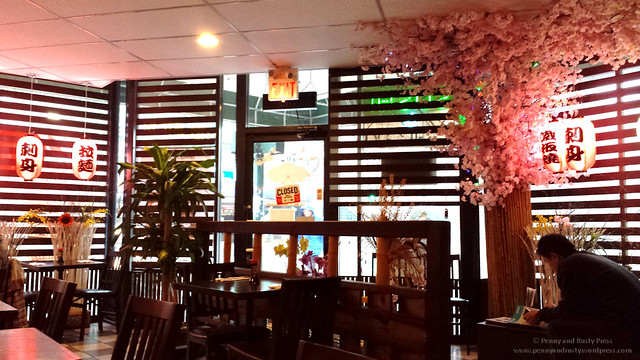 I ordered the Sashimi and Sushi Bento Box ($12.99) for my weekday lunch which included a crisp salad with zesty dressing, tempura (2 prawns, melon, bean, yam, and sweet potato), sashimi (2 farmed Atlantic salmon, 2 tuna), nigiri (salmon, tuna, and ebi), rice, and a daily special. The daily special turned out to be a korokke with a crab claw stuck to it. This isn’t like the crab claws that you get at Chinese restaurants. It was basically just the potato croquette with a crab claw attached to it. 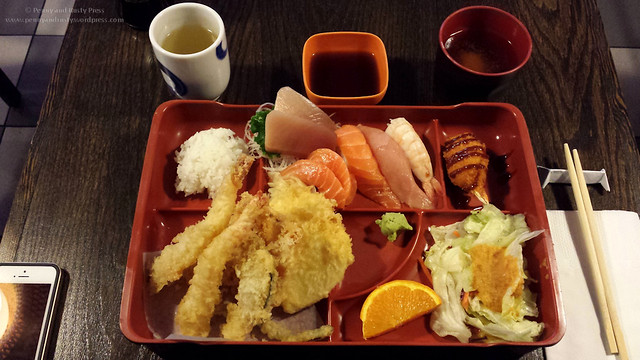 The sashimi was pretty good… proper temperature, texture and clean. The nigiri was similarly okay and the tempura had a nice crisp to the batter. Overall, there was nothing really bad here… but nothing that really made me say wow either. I did like that they pre-cut the orange piece to make it easier to eat and it was juicy.