We had a bit of communication problem when we were supposed to meet some friends for dinner in November. We thought they meant the Keg on Alberni… as it turned out… they meant the Keg on Dunsmuir. So, after a brisk and chilly walk, we finally made it to the corner of Dunsmuir and Granville and were whisked upstairs.

Our waitress told us that the special was an 18 oz Kansas City T-bone… I’ve never heard of a Kansas City T-bone before so I figured I’d give it a try. As it turned out, the waitress was wrong and it was simply an 18 oz, bone-in Kansas City Strip… which is basically the same steak as a New York Striploin. The difference being that a T-bone has a bit of the tenderloin steak attached to the bone. You could clearly see that there was no “T” shaped bone and the entire steak was made up of the standard striploin portion.

The steak was cooked as requested, to a nice medium rare. However, it wasn’t as flavourful or as tender as my usual go-to choice of a rib steak. There was nothing wrong with the steak… just wish that the waitress knew what the specials were so I wouldn’t be disappointed later on. 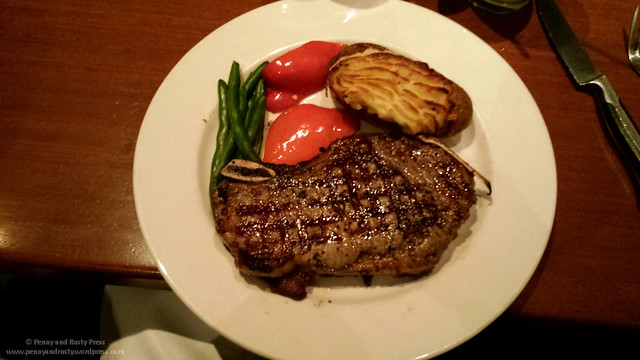