Royal Seoul House Korean Restaurant has been a staple on Broadway since 1990. I remember this being my introduction to Korean food back in the 90’s but I haven’t been back here in years.

We were in the neighbourhood recently getting my watch fixed and decided to drop by for lunch. The interior actually looks like it hasn’t changed very much over the years… it’s a rather large restaurant and is kind of setup to look like a courtyard with buildings with blue tiled roofs. 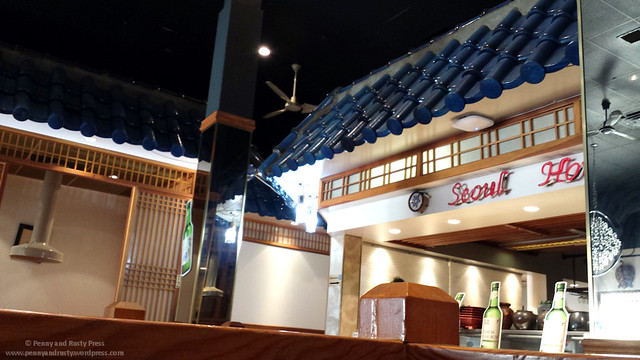 We decided on trying the Royal Lunch Course for $20 per person. The items that we received were slightly different from what was listed on the menu so we’re not sure if the menu changed or they just mixed up our order. First up was the Sweet Pumpkin Porridge which was served warm. It was creamy and sweet but not something that we enjoyed very much. The Mul Kimchi is a watery version of kimchi that is usually consumed like a drink. I think I would have preferred the regular kimchi that I’m more familiar with.

The Green Salad was served with cucumber and apple. From what I remember, a lot of dishes used many of the same type of ingredients. 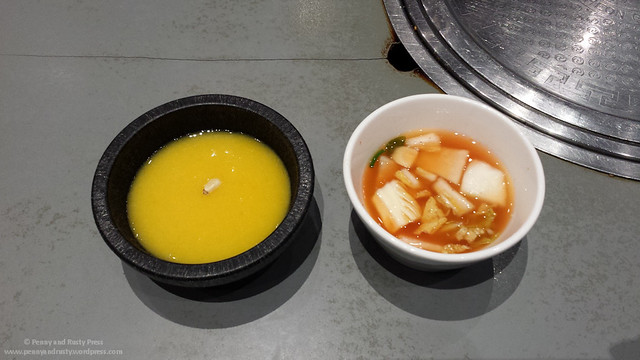 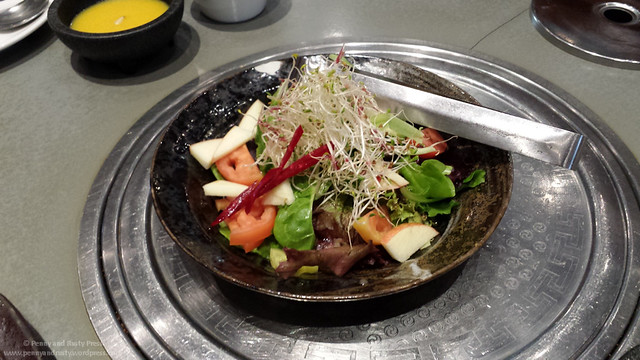 Tangpyeongchae is a traditional Korean dish made with mung bean jelly mixed with vegetables and seaweed. I actually quite enjoyed this as it was light and tender.

I didn’t see the Deep Fried Fish on the menu but thought that it was very good. It came served with a honey mustard sauce (which I thought was kind of weird at first but found that it worked). 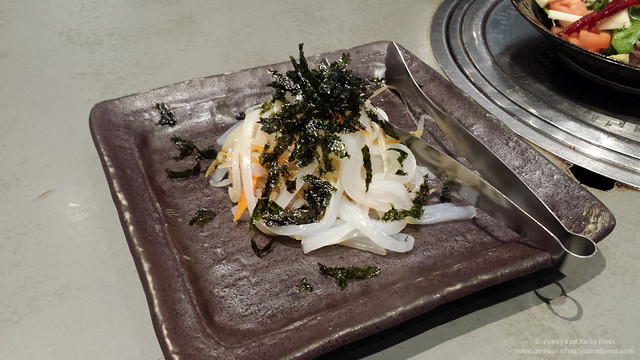 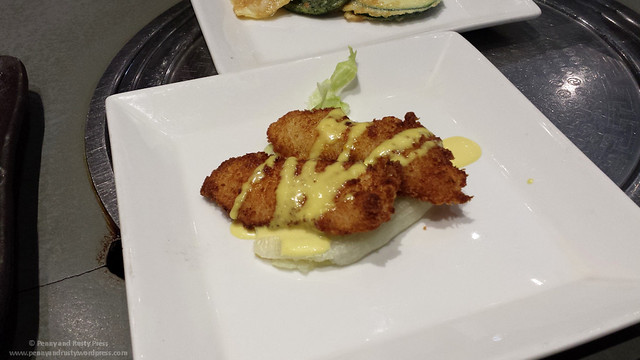 Samsaek Jeon is a dish of three kinds of mini pancakes… their version had pollack (which kind of looked like egg), seaweed, and zucchini.

The Tangsooyeuk was another dish that I enjoyed. It’s like a sweet and sour deep fried pork dish with onions, apple, and cucumber. 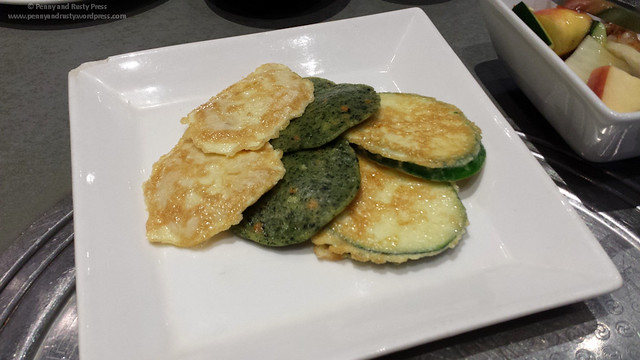 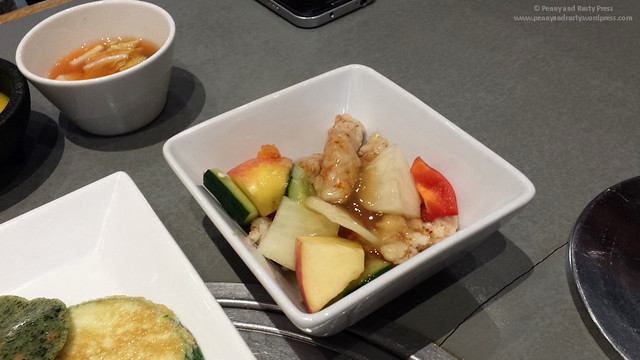 The Chilly Tofu was pan-fried and served with a sweet chili sauce.

Ojingeo muchim and assorted vegetables in spicy sauce is a jellyfish dish that had a hit of wasabi. 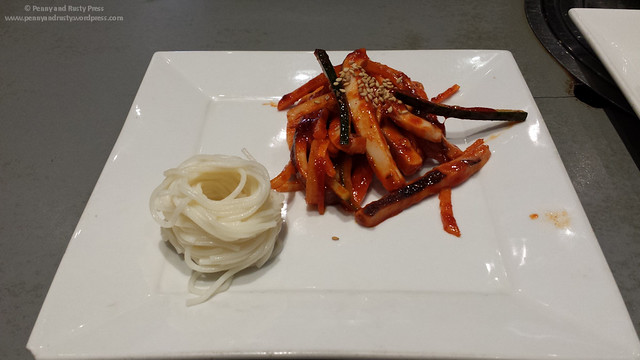 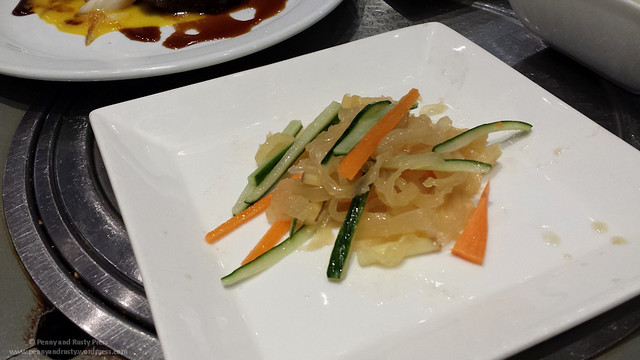 Up until now, most of the dishes were fairly light. But that’s when some of the meaty dishes started to arrive… The Dan Hobak Galbi Jjim steamed beef ribs with sweet pumpkin sauce was quite tender. I wish there were more of this dish. 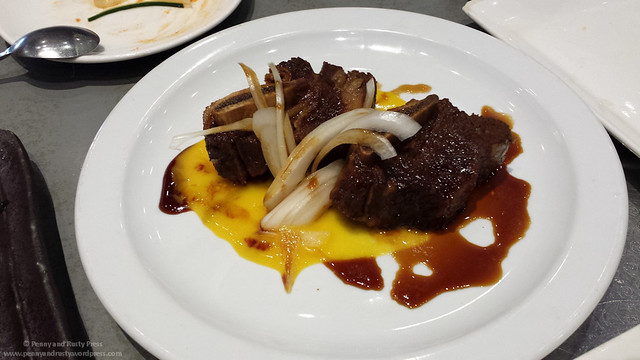 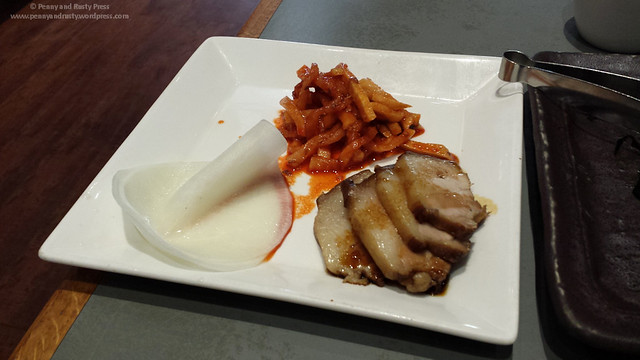 In most of the other Korean restaurants that we’ve been to, the banchan arrived early. But here, it wasn’t until we were almost at the end of our meal that the banchan arrived with rice. There were only three items: potatoes, marinated seaweed, and kimchi. Honestly, nothing worth waiting for here. But it would have been nice if it arrived earlier in the meal.

I was interested when the Godeungeo Jorim arrived. I think this is supposed to be braised mackerel but it tasted more like it was hard-boiled. The meat was super tough and difficult to chew. 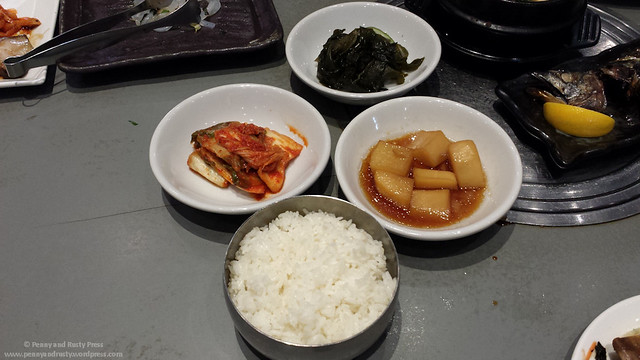 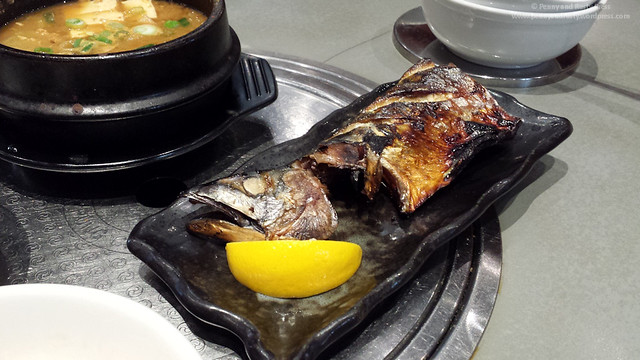 The Doenjang Jjigae fermented soy bean paste soup with tofu, octopus, jalapeno is a perfect dish on a cold day.

Last up was the Japchae, a rather filling dish of pan-fried potato noodles with vegetables that just sticks to your gut. 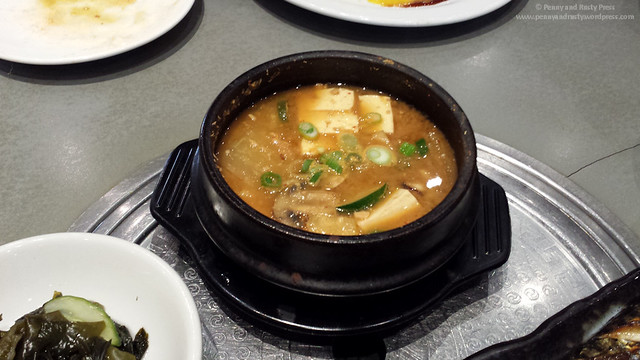 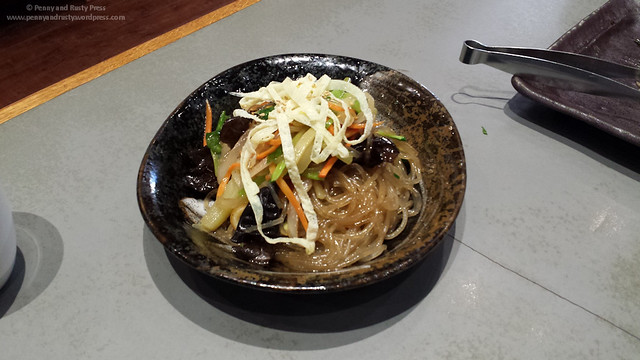 I’m not sure if they just forgot our sweet ginger drink or if they changed their menu.. but we were so stuffed that we didn’t want to bother asking. There are definitely some dishes that are better than others here but, overall, we were happy with our meal as we got to try out a bunch of different items.

Don’t forget to use the little call-button located at the table when you need something… otherwise, it’s really difficult to get service here.