Supermarine is a newish restaurant that opened up in the former location of Abigail’s Party in Kits. There’s still remnants of Abigail’s in this tiny restaurant (sister restaurant to Wildebeest) as can be seen in the names of some of the cocktails as well as the name that appears on the bill that you receive at the end of your meal. 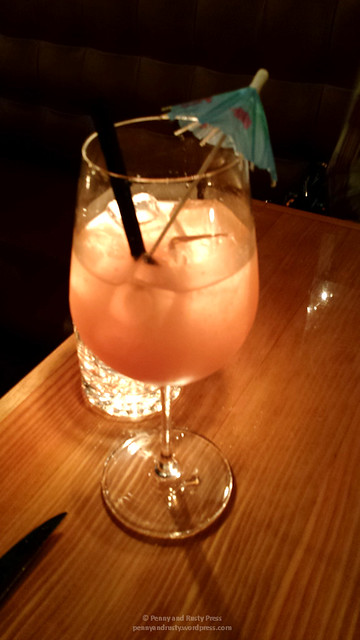 We arrived for our Dine Out service at 6pm on a Sunday with the restaurant being half full when we arrived. Their 3 course set menu is priced at $30. However, after hearing some good things about their Octopus Chips, we decided to start out with an order of that as well as their Parasol Spritz (pear, apple, and ginger beer). We could feel the ginger warm up our throats so this is a nice refreshing drink for a cold night.

The sliced octopus chips were paired with potato slices and bravas sauce.

We originally decided on the Fried Brussels Sprout Salad and Littleneck Clam & Ham Hock Chowder for our first course. However, they mixed up our order and brought us the Smoked Whitefish instead of the chowder. When we told them of the error, they told us to go ahead and enjoy the smoked whitefish and they’d bring us the chowder shortly, no charge. 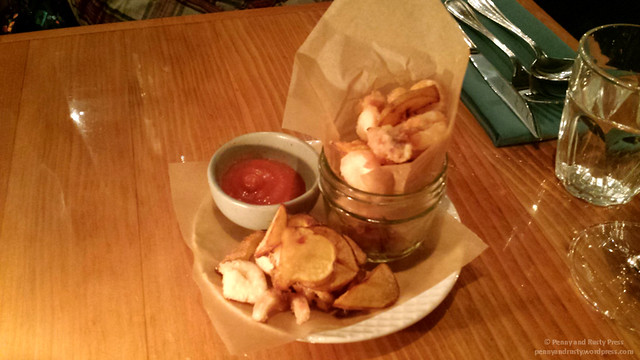 The chunky whitefish is served in a small jar with saltines as well as hot sauce and crème fraîche. It was quite pleasing so we were happy about this little accident. 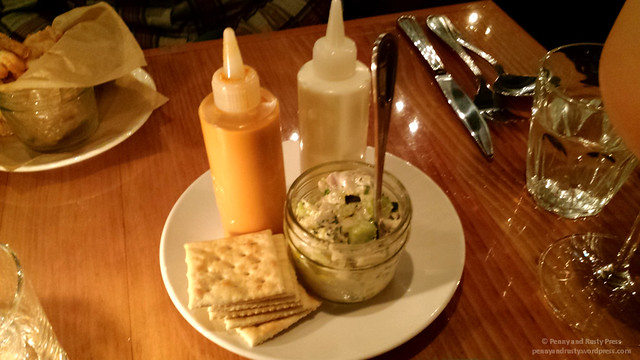 The brussels sprouts had a mix of soy and honey vinaigrette that gathered at the bottom of the bowl. It gave the salad an interesting contrast to the yogurt sauce that surrounded the greens. 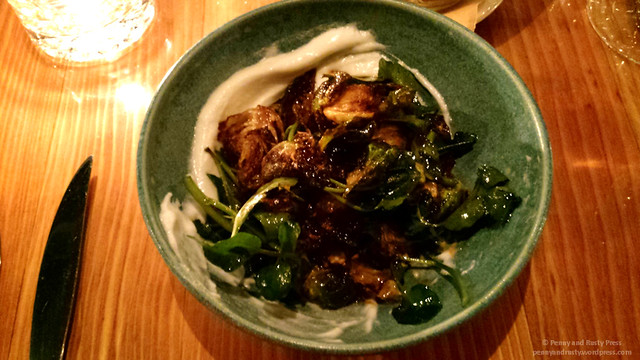 Probably one of the best dishes of the evening, which is saying a lot because everything was so good, was the chowder. While not being a super thick chowder, the velvety cream was rich and flavoured with fresh herbs and green garlic pistou. If you’ve read my blog long enough, you know how much I love oyster crackers… bonus! 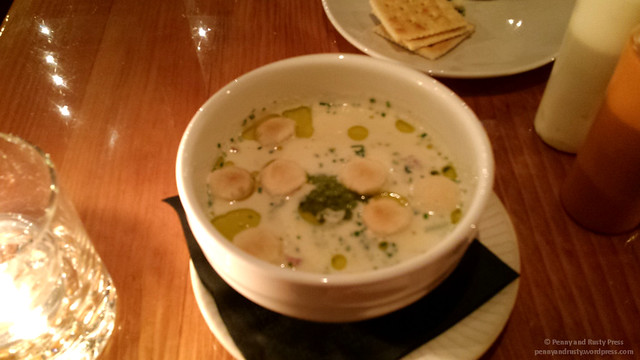 For our main course, we picked the Salt Spring Island Mussels and the Flat Iron Steak. The mussels were plump and plentiful and had a smoky tomato broth with plenty of pieces of chorizo. If that wasn’t enough, the mussels also came with frites! Oh, those frites were sooo good! Even though we were super stuffed, we just couldn’t help but devour them. 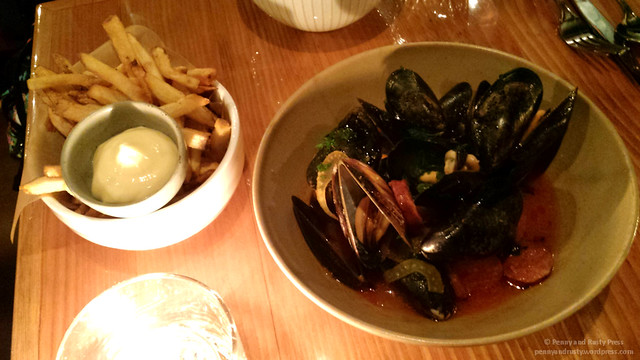 The flat iron steak is a cut of beef that has a good amount of flavour but can be a bit tough. That’s why it’s generally served pre-cut across the grain. The result is a flavourful and tender steak – as I can attest to. It was paired with nori pomme purée, smoked fingerling potatoes, and topped with watercress. It was a little difficult to see the steak with the watercress on top so I had to move it aside to take my picture. 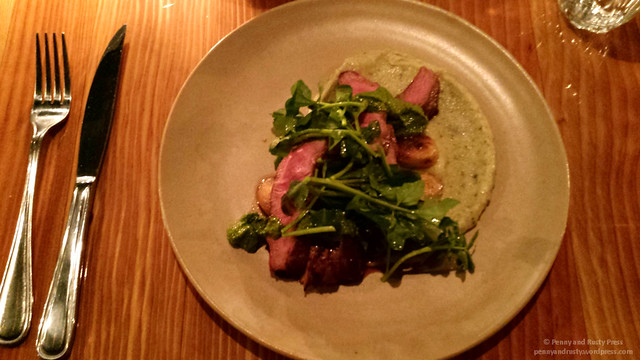 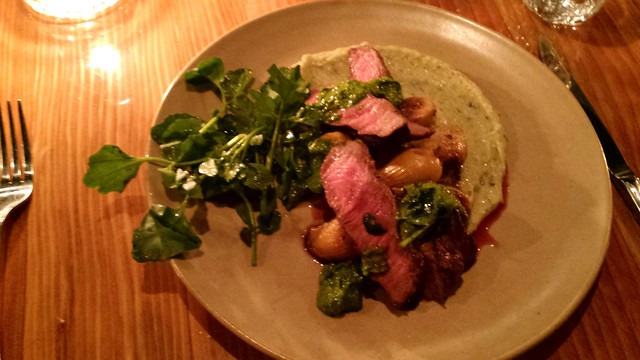 We finished off our Dine Out date with the Calamansi Lime Curd and Chocolate Semifreddo. The calamansi lime curd was accompanied with whipped cream cheese, candied lime, and shortbread crumbs. I found the curd to be refreshing but quite tart and we didn’t finish it (although we were quite full at this point). 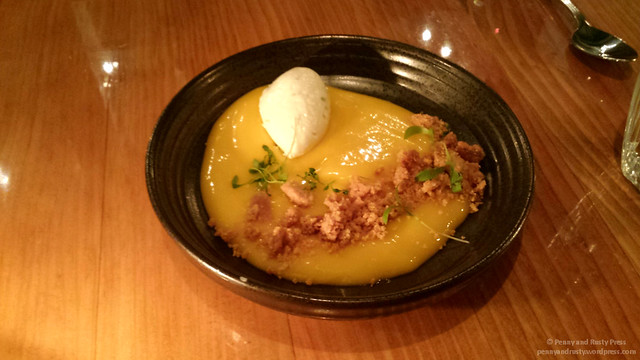 I really enjoyed the chocolate semifreddo. This half-frozen dessert was a little difficult to eat because it was hard to use a spoon to break it up. Otherwise, it was very enjoyable and I wish there was more of the toasted marshmallow that came with it. 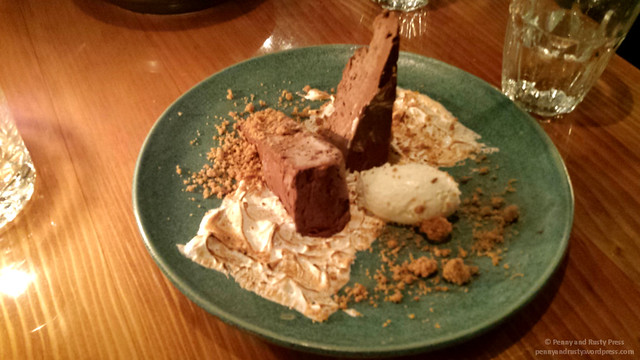 Overall, the service and the food here was superb… very friendly and helpful. If you’re looking for an intimate setting, this would make a good choice. But those of you that are claustrophobic might not enjoy the close seating. Food came out fairly quickly but we weren’t rushed.