Vancouver loves their donut shops! Cartems Donuterie happens to be one of those specialty donut shops that gained an immense following during the epic donut craze of 2012. Last year, they opened up a new shop in the Mount Pleasant area of Vancouver along Main Street.

This location has an open concept with the order counter located in the back of the store. I was around the area in early January and decided that I needed a pick me up before work. 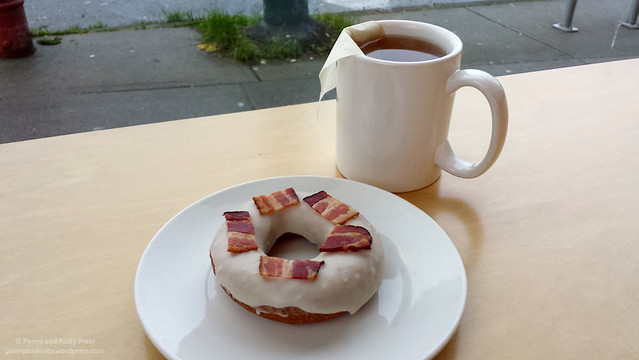 I opted for an Earl Grey tea ($3) along with a Whiskey Bacon donut ($3.25). The icing on this donut was quite sweet. I also found that the donut itself was a bit oily… but I’ve noticed that most of their donuts are on the oily side. While the bacon wasn’t crispy, I still enjoyed the donut and wouldn’t hesitate to order it again.