Okay, first off… I’m not a vegetarian. I love me a good steak and think that the only thing better than crispy bacon is super fork-tender stewed pork belly. But when we were in Granville Island in May, I noticed that they opened up a new Chau Veggiexpress in the food court and figured I’d try them out.

I ordered the Golden Temple Soup ($11.75) – a light turmeric coconut curry soup with tofu, bean curd, taro, carrots, broccoli, cauliflower, mushrooms, kale, and a slice of lotus root. The first thing that I noticed is that it didn’t look anything like the picture on their menu… mostly because they piled the kale on top of everything and it was served in a plastic bowl. 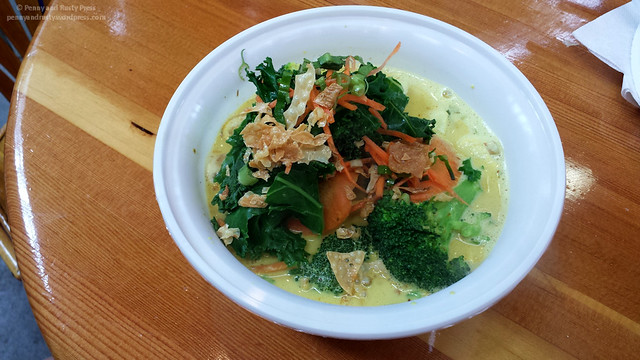 I wound up having to move some of the kale around so I could get a shot of the stuff underneath. This was actually a pretty good curry soup and I quite enjoyed the turmeric and coconut milk. The noodles were quite slippery and difficult to pick up – I wonder if it would have been better if I had proper utensils other than the bamboo chopsticks and plastic spoon? 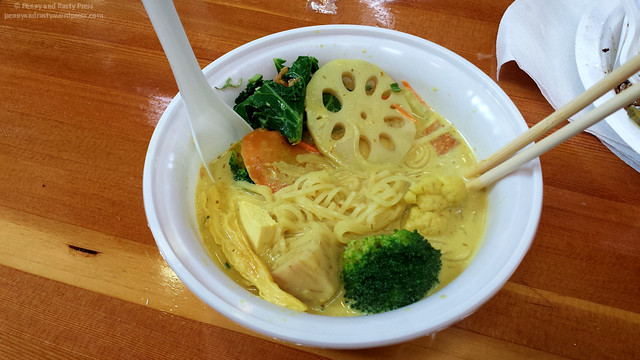 The soup was pretty spot on but I wasn’t a big fan of the kale… perhaps if it had been wilted a bit in the soup it would have been better. Oh, and if they could have added some rare beef to this dish or fried chicken… that would have been the bomb!