Our 6 hour drive down from Vancouver, BC to Portland turned into a 9 hour trip due to a major accident on the I5 as well as numerous traffic snarl-ups. Since we wanted to get some shopping done, we decided to stop off for some dinner first. We were originally going to try Screen Door but it was so busy that we wound up at Le Bistro Montage instead.

This restaurant is located in the Central Eastside Industrial District right under the SE Morrison Bridge with plenty of free street-side parking. At first, we couldn’t tell if it was open because the front door seemed to have a metal gate on it but we saw patrons inside so we went inside. The interior is fairly dark as not much light comes in from the windows. Instead, they have candlelights on the linen-covered communal tables. Along the walls, there are large custom paintings. The whole vibe kinda speaks of Portland.

Speaking to their cajun-inspired menu offerings, the napkins were folded into the shape of a fleur de lis. 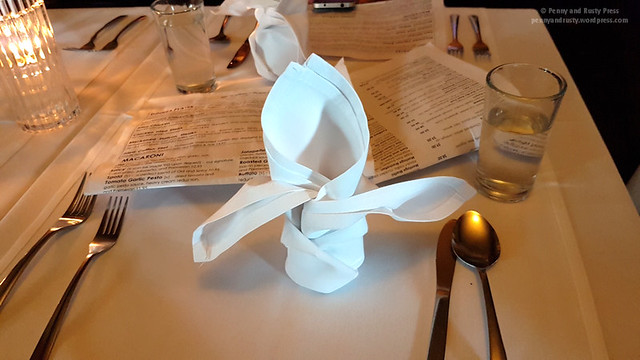 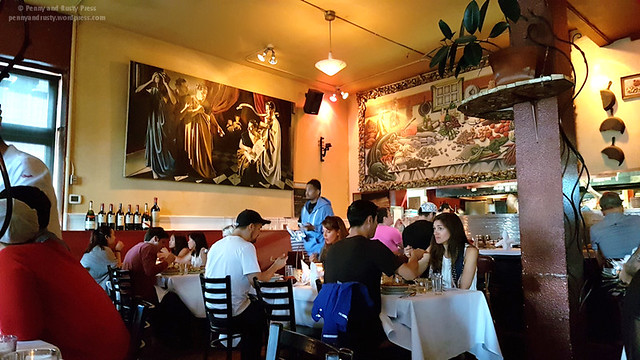 Service was a little peculiar (or at least our server was). I suppose that’s to be expected in a place like Portland (known for their “Keep Portland Weird slogan”). I originally wanted to try their POG (passion fruit, orange, and guava juice) but they were all out. They suggested a Portland Punch instead, which I agreed to… but they wound up giving me a Lemonade instead (which actually was quite refreshing). This salad came with the dinner plate and was accompanied with a pleasingly tart raspberry vinaigrette. 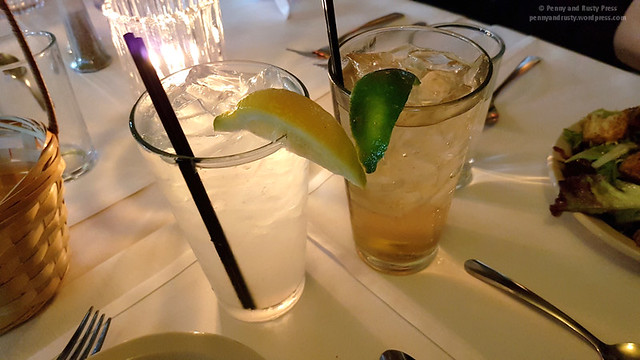 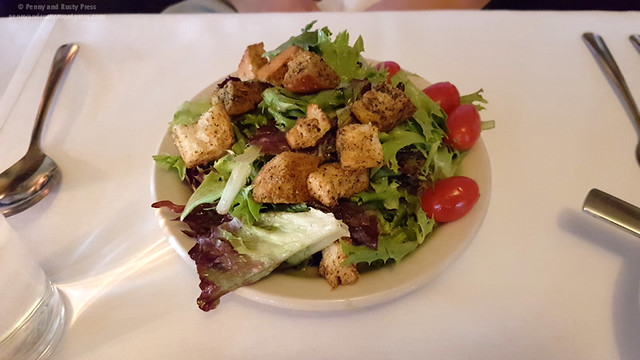 Le Bistro Montage is known for their macaroni and cheese so I knew that I wanted to try that. I ordered the Roasted Garlic and Bacon Mac ($12.95) served with roasted garlic and bacon pieces in a heavy cream reduction with parmesan cheese. The large elbow macaroni made the perfect vessel for the heavy cream sauce and I was quite pleased with the ample amount of bacon that came in this dish.

The Fried Chicken ($12.95) wasn’t exactly how I imagined it would be. Marinated in buttermilk and breaded with cajun seasoning and flour, the butterflied chicken breast was also served with garlic mashed potatoes, cornbread muffin, and corn. I was expecting the chicken to have a thicker batter to it and a crispy skin. The mashed potatoes were super smooth and creamy and the cornbread muffin was perfect. 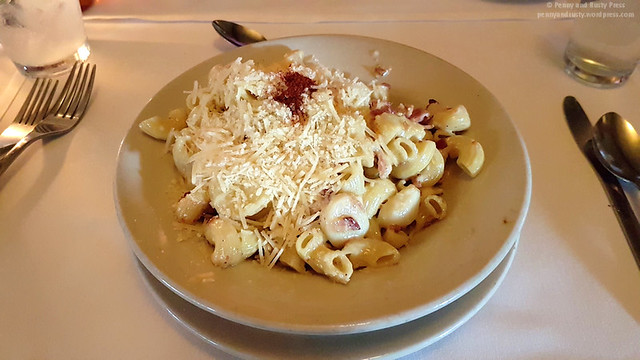 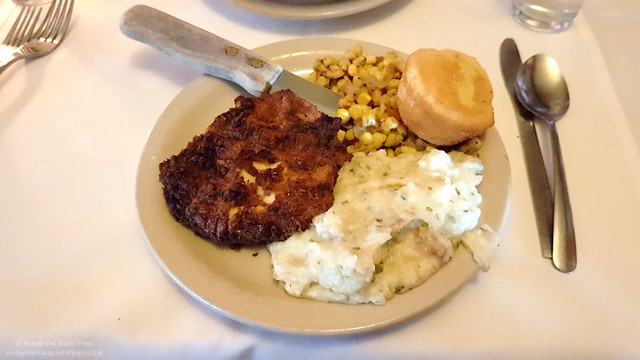 I had originally ordered a cup of Chicken & Andouille Gumbo ($3.00) but they forgot it and I had to flag someone down to bring it to me. I’m glad that I did because this was a really super gumbo with chicken, andouille sausage, peppers, and onions in a chicken stock thickened with okra, filé powder (a spicy herb made from the dried and ground leaves of the North American sassafras tree) and a nut-brown roux served over seasoned rice and with another one of those super cornbread muffins. It had the perfect amount of spice to it and was packed full of flavour. 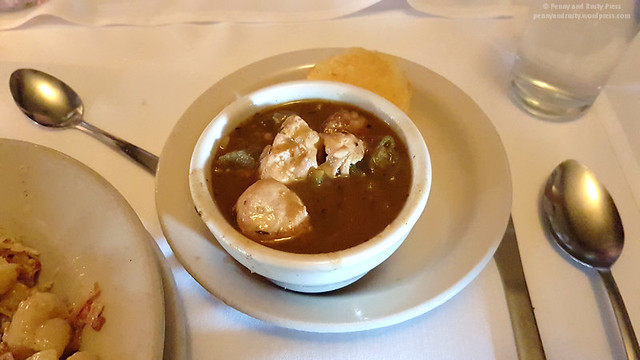 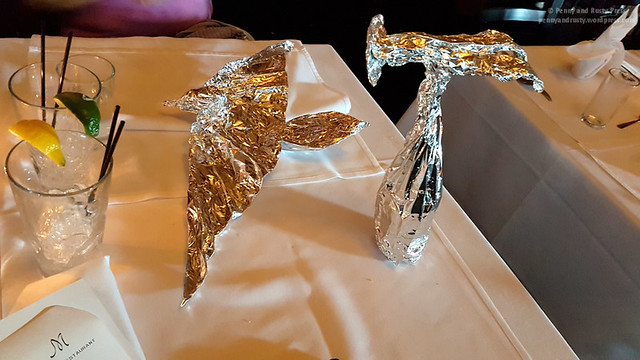 There was so much food that they packed our leftovers for us into custom tin foil art creatures. I think I got the short end of the stick as they turned mine into a hammer… seriously? Not even Thor’s hammer. My sweetie did get a cute little bird – that the waitress playfully pounded with my hammer (hey, I did say she was a bit weird). 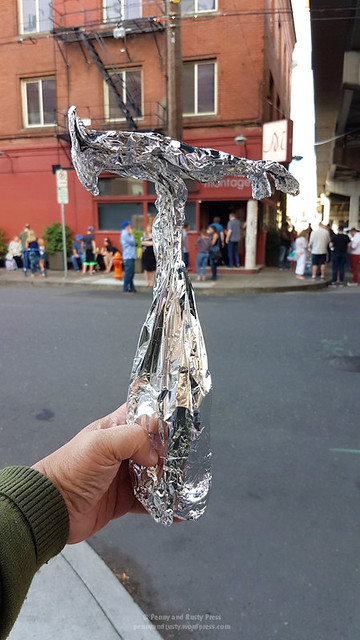 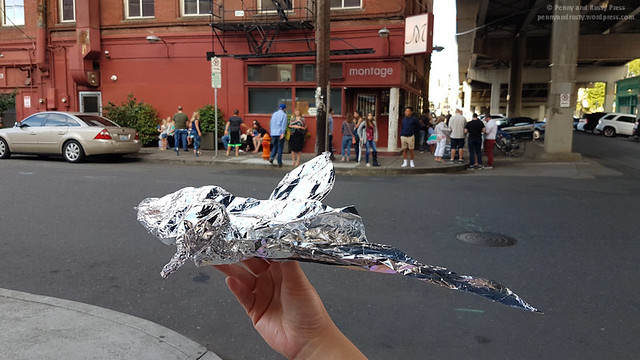 It’s rather loud and lively here so it’s difficult to carry on an intimate conversation and the service seems a bit hit-and-miss… but the food was quite good. Definitely try the gumbo if you come here.