If you were looking for Cuban food in Vancouver, you’d be sorely out of luck. While we were in Portland, we managed to visit Pambiche in the Kerns area of NE Portland and were quite impressed by the cuisine.

Located in a turn-of-the-century Victorian building known as the Apambichao Building, a large mural adorns the outside of the building and is as much artwork as it is an exemplification of Cuban culture. 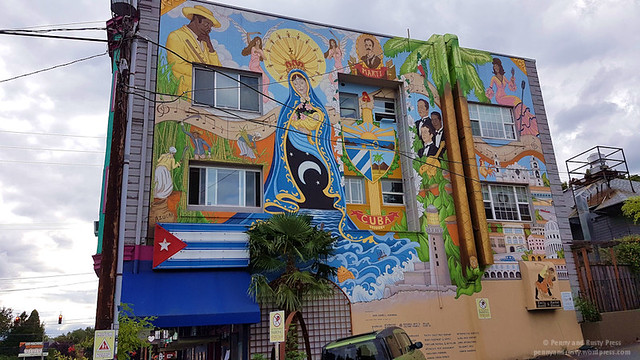 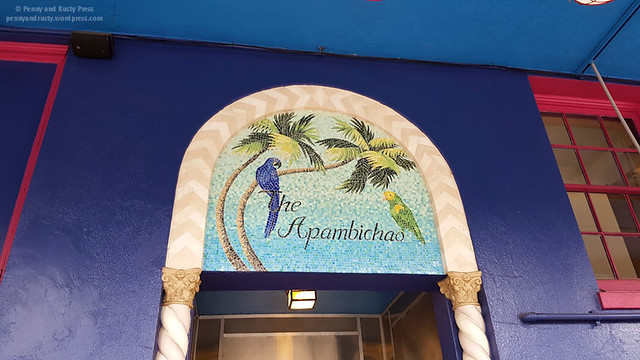 On the inside, the walls are painted with bright colours and the decor is as colourful as the food they serve. 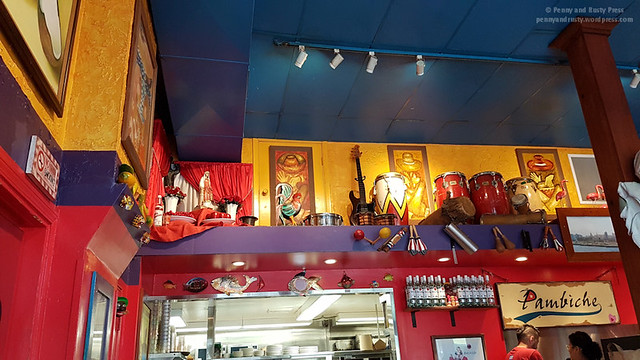 We managed to arrive during Happy Hour (or “La Hora del Amigo”) which let us try a bunch of appies at a reasonable price. 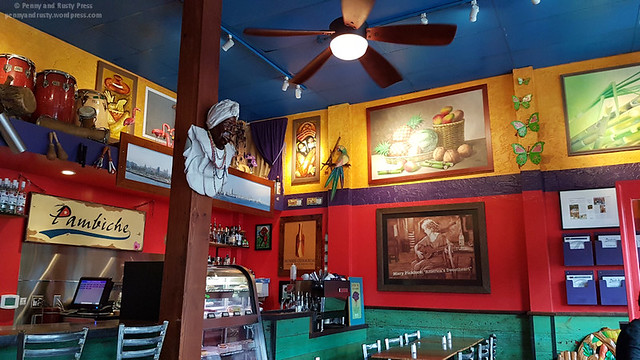 The Limonada de Guarapo (sugar cane lemonade) has a freshly milled sugar cane stalk along with freshly squeezed lime juice and served on ice ($3.25). I opted for the Ironbeer ($1.75) which was described as the national beverage of Cuba. My Ironbeer was quite good and had the flavour of a light tasting root beer. 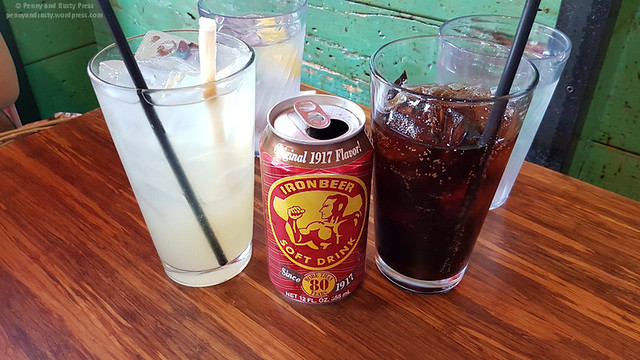 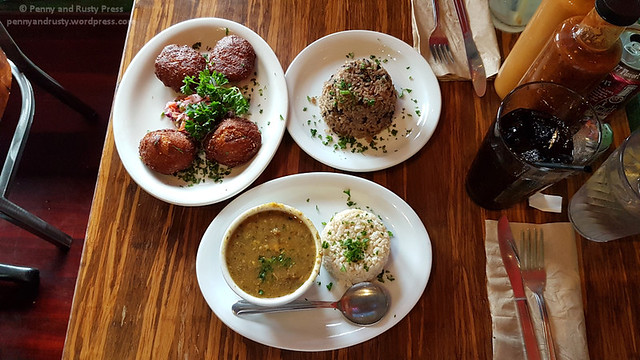 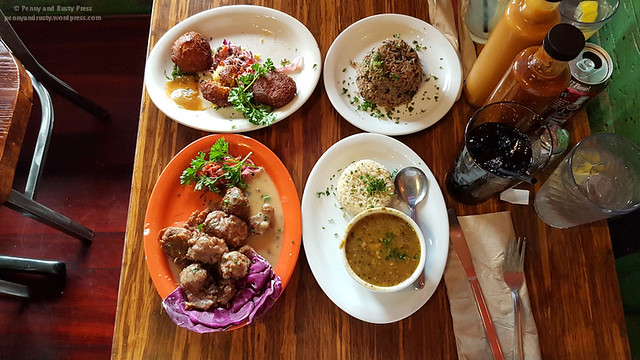 The Masitas was the most expensive dish that we ordered and it took a little while for it to come out. Still, at $6, it was relatively cheap since you get a generous serving of adobo-seasoned pork that’s been deep-fried and tossed in a garlic mojo sauce. The pork was quite tender on the inside. I actually enjoyed having these mixed with the Moros & Cristianos. 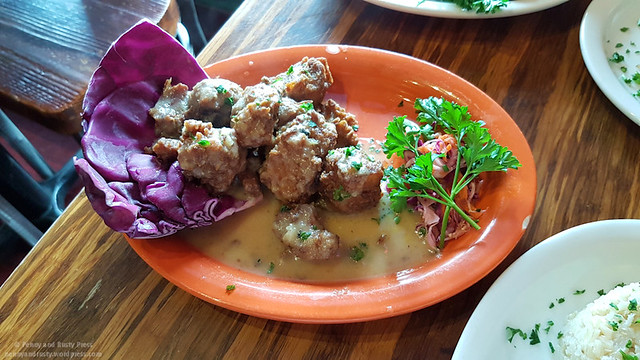 The Cuban corn fritters had a nice texture to it – almost like a cross between a hushpuppy and cornbread on the inside. 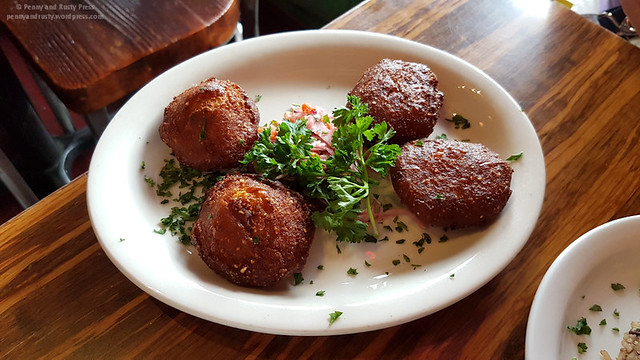 Moros & Cristianos is a staple in Cuban cuisine (basically rice and beans) and gets the name from “Moors and Christians” where the “Moors” refers to black beans and the “Christians” refers to white rice. In this dish, the black turtle beans and long grain white rice are cooked with bacon, sofrito (a base of onions, garlic, and peppers), ham masitas and creole herbs and spices creating a very filling dish. 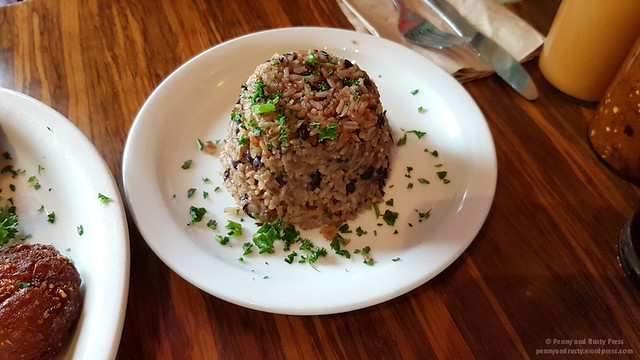 The Ajiaco Criollo is a Cuban pepper pot stew served with white rice and often considered to be the national dish of Cuba. It’s basically a one pot meal that comes brimming with a variety of ingredients. We kicked it up a little with the sweet banana sauce and hot sauce at the table. 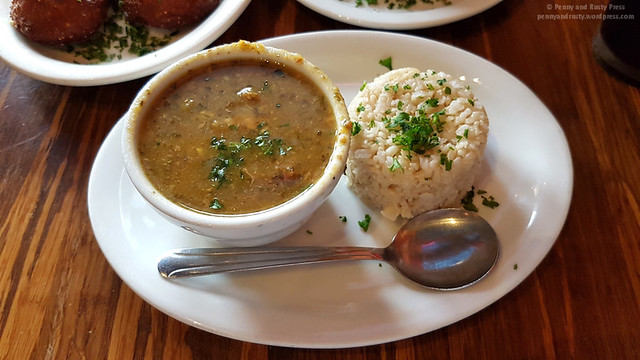 After we returned to Vancouver, we went looking for a Cuban restaurant that serves up these kinds of Cuban comfort dishes but were disappointed when we couldn’t find any. Do you know of any great Cuban restaurants in Vancouver?