Pink Elephant Thai is part of the Thai House group of restaurants that also includes their signature Thai House restaurants as well as Urban Thai Bistro. My impression is that Pink Elephant is going more for the younger crowds who may be more interested in style than anything else. They had recently opened a location in the new Marine Gateway complex, near Dublin Crossing Irish Pub.

The inside of this restaurant is a bit cramped but they have high ceilings to make it appear bigger. Now, I’ve always been a fan of the Thai House. Regardless of whether or not they serve “authentic” Thai food, the food has always been good and the price point is reasonable. For some reason, they use a lot of large serving dishes and bowls when they plate their food at Pink Elephant Thai… I’m not a big fan of that when the tables are so cramped (especially since we wind up ordering a lot of dishes).

First off, we ordered some drinks… the Royal Thai with lychee juice and coconut was really good. We also ordered a regular Lychee Juice and were a bit disappointed that it needed more ice and more lychee flavour. 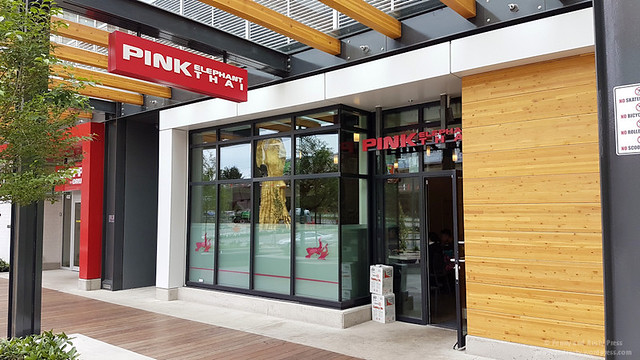 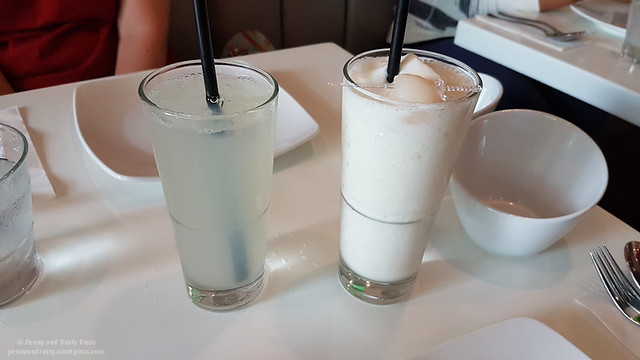 As you can see below, our table got quite crowded when our food started to arrive. I’ve seen these deep, white, asymmetrical bowls used in other restaurants and I’ve never been impressed by them. They take up too much room, it’s difficult to take pictures of the food in the bowls, and it’s sometimes difficult to try to serve food out of them. 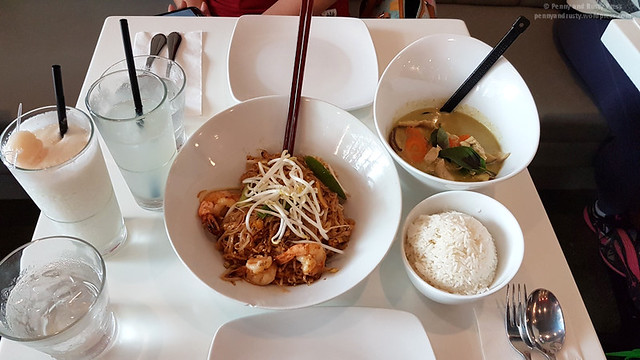 This was the Green Curry with Chicken ($13.95) made with coconut milk, eggplant, snap peas, carrots, bell peppers, and fresh basil. The chicken was quite dry, which was a disappointment as I usually judge Thai restaurants by this dish. On the other hand, the green curry sauce was good. 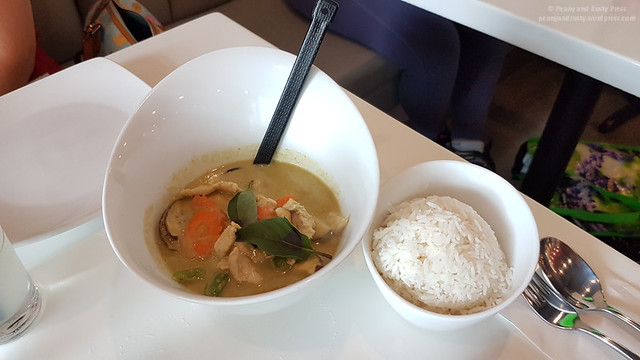 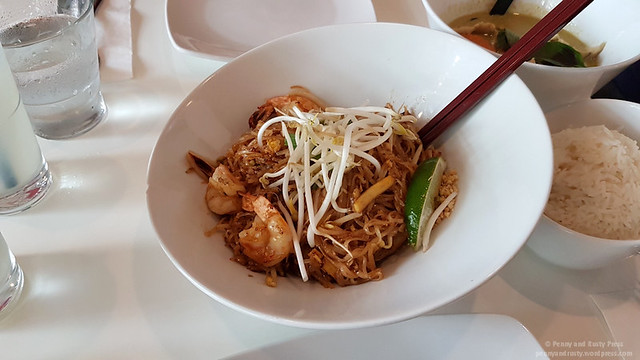 Last to arrive at the table were our appetizers (I know… go figure). On the left was the Deep Fried Boneless Chicken Wings ($9.50) stuffed with vegetables and glass noodles. On the right was the Shrimp cakes ($7.50) mixed with spices and coated in breadcrumbs and served with a homemade sweet chili sauce. 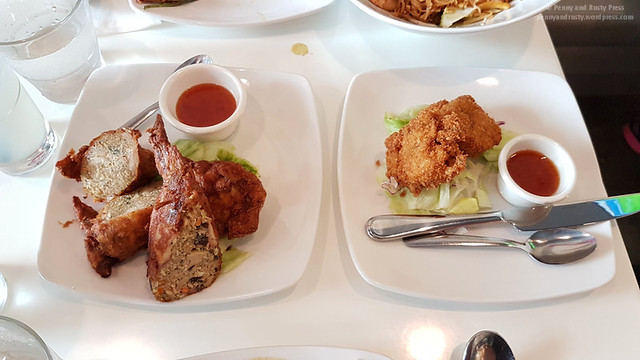 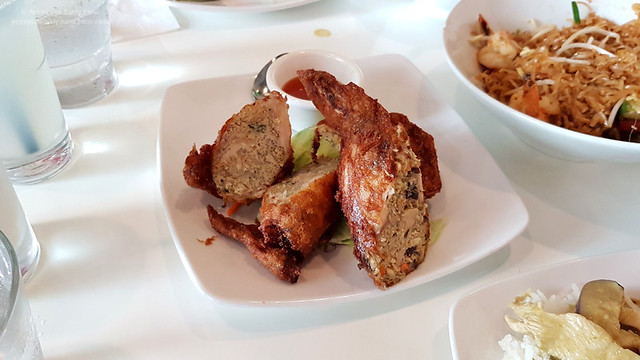 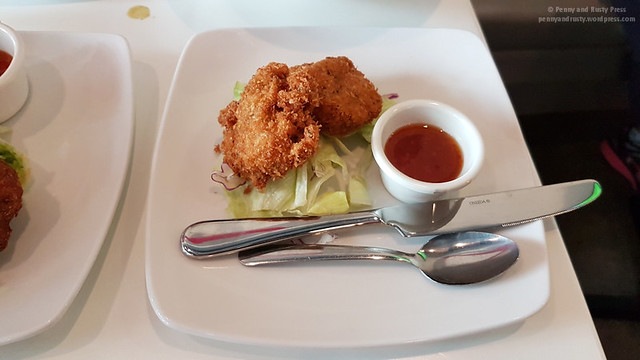 We came back for a revisit about a month later to try some of their other dishes. We had our hopes up because there was an aromatic fragrance in the air as we walked in.

This time, we ordered the Royal Thai again as well as a Virgin Pink Colada ($3.95). For some reason, the drinks were better during our last visit (think they went a bit stingy on the lychee juice this time around). 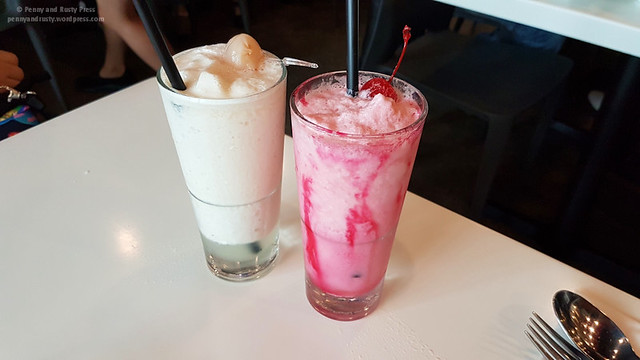 Since we ordered the shrimp cakes last time, we decided to try the Tod Man Fish Cakes ($6.00) served with sweet chili sauce, cucumber, and chutney. The five fish cakes were small but quite flavourful. 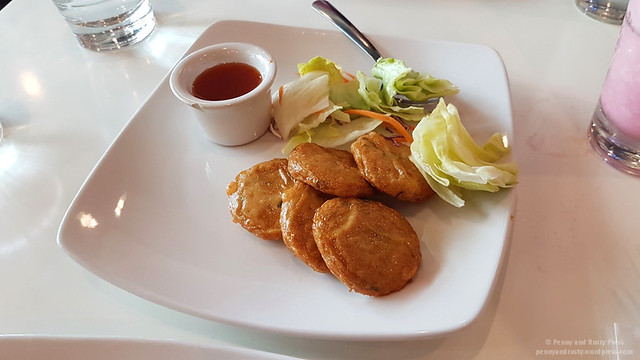 The Green Beans ($12.95) were supposedly served with dried shrimp sauce but you couldn’t really tell from the taste. The green beans were cooked well and had a nice spicy kick but they would have been better if it had some dried shrimp in it. 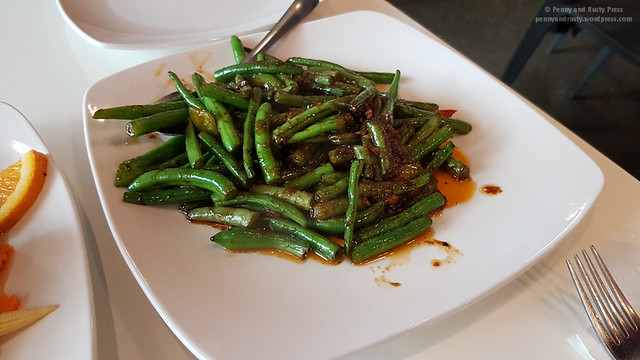 We had high hopes for the ‘Pla’ Black Cod ($18.95) deep-fried and topped with 3 flavoured sauce. We were quite surprised when this dish arrived because it only came with one tiny piece of cod. We actually had to ask the waitress if this dish only came with one piece of cod because it seemed like such a ripoff. To be fair, the cod was perfectly fried and the sauce was quite good. To make up for the lack of fish, they included a lot of veggies in this dish. Definitely not worth the price however. 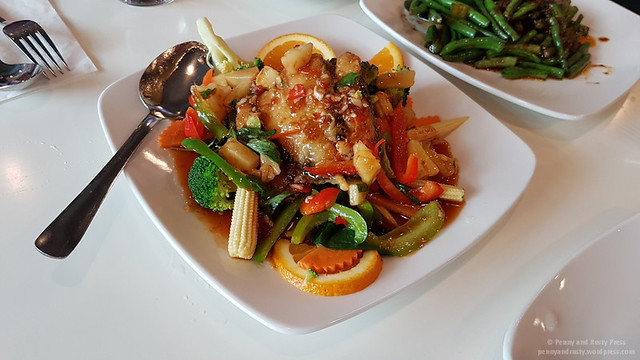 Last up was the Goong Ob Woon Sen ($16.95) which included tiger prawns and glass noodles in a clay pot served with Thai spicy sauce. The sauce wasn’t as good as the “black cod” dish and I felt that the clay pot noodles weren’t even close to the one we had at Pok Pok in Portland. 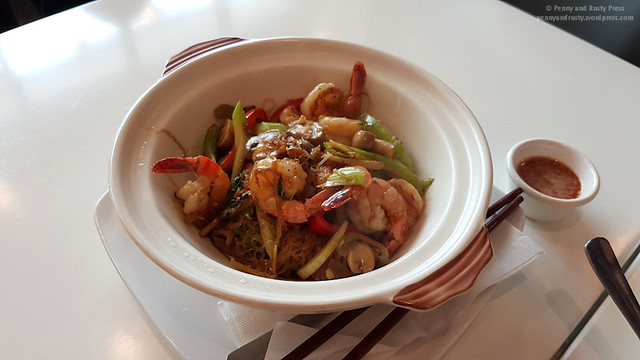 Overall, I feel like they’ve sacrificed quality for style. There is potential in some of their dishes but the execution leaves a lot to be desired.