Sushi S is located in a busy mini mall located on the southwest corner of Willingdon and Moscrop. I’ve often passed by this location but steered clear due to how busy the crowded parking lot seems to get.

The interior decor isn’t bad… it’s definitely not a hole-in-the-wall and it doesn’t feel overcrowded. They have large booths on one side of the restaurant while the smaller tables are on the other side. It wasn’t overly busy when I visited at 6pm on a Wednesday but the parking lot fills up pretty quickly later on. 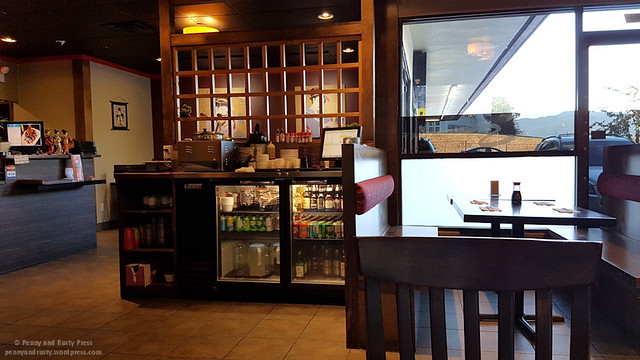 On my first visit, I decided to try a bunch of different nigiri and appies… starting with the Wakame Sunomono ($4.40). At first, I thought the price was a bit expensive but when the dish arrived, I realized that it’s a fairly large portion. There were plenty of cold vermicelli noodles sitting underneath the fresh wakame (seaweed). 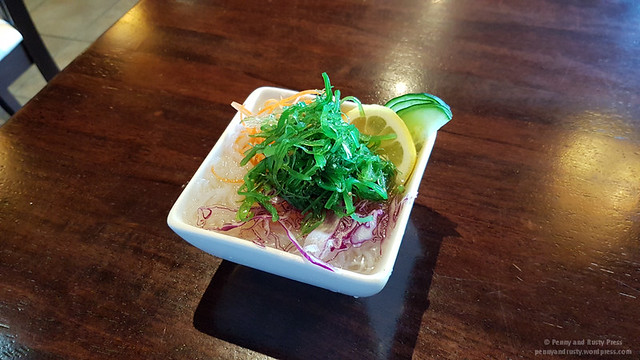 As autumn had just arrived in Vancouver, it also ushered in uni season. Prior to this visit, I’ve never tried uni (the edible gonad portion of sea urchin) and I was determined to give it a go this year. 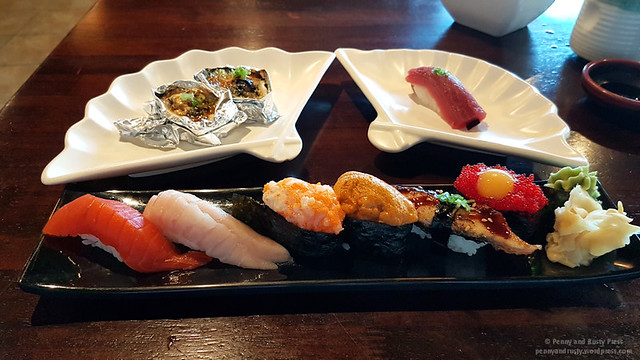 But before we go there, I also ordered the Oyster Motoyaki ($4.40). While the price seemed reasonable, the two baked oysters were quite tiny. On the plus side, they seemed fresh and the flavours were good. They didn’t overwhelm the oysters with too much mayo sauce. 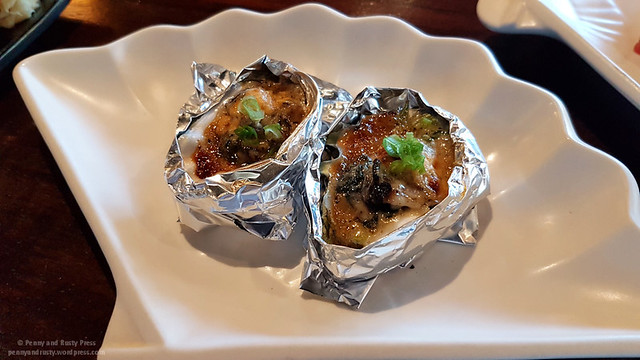 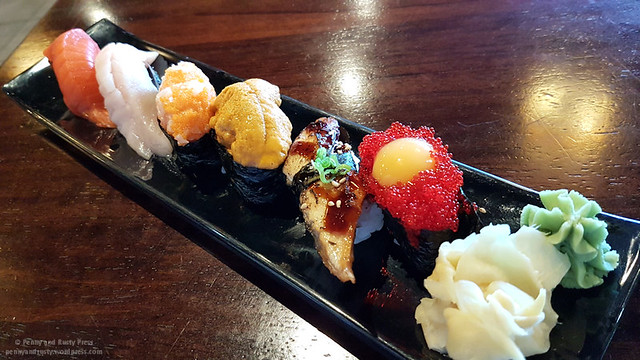 First off, the uni is a seasonal delicacy… some people love it and some people hate it. It’s probably best not to think too much about it while you’re eating it and just enjoy the different textures and flavours. When I first put the uni nigiri in my mouth, I was immediately hit by how creamy the texture was. This was followed by a briny glow and then something that I really couldn’t put my finger on. I suppose it’s pretty much how you would expect briny gonads would taste but, as this was my first taste of uni, I had nothing to compare it with. It was definitely rich and creamy when I bit into it. While there was a slight sweetness to it, I felt like it was more overwhelmingly briny.

Update: After just coming back from a trip to Tokyo and trying the uni there… I’ve got to say that the uni at Sushi S left a lot to be desired. 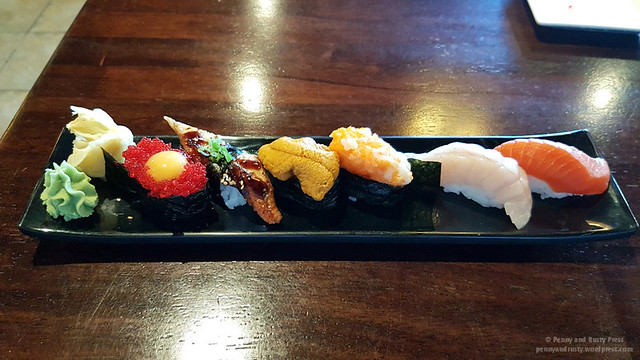 As for the rest of the nigiri, the unagi (freshwater eel) was pretty good while the chopped scallop was quite creamy. One of my favourite pieces was the toro (tuna belly) as it was buttery soft. The sake (salmon – also a homophone for rice wine) was at best average. 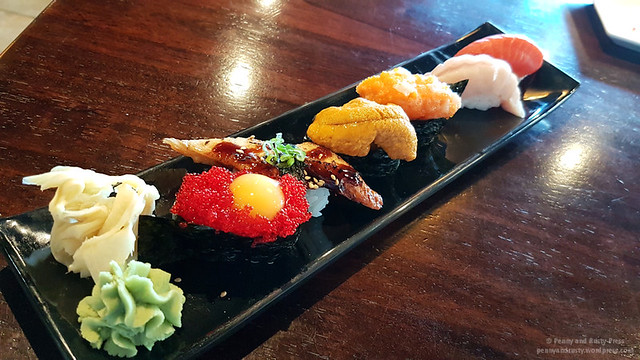 Egg on egg… best way to describe the tobiko with quail egg. As you can imagine, there’s quite a bit of richness to this one piece of sushi. The popping nature of the tobiko is also a bit of a novelty that I enjoy. 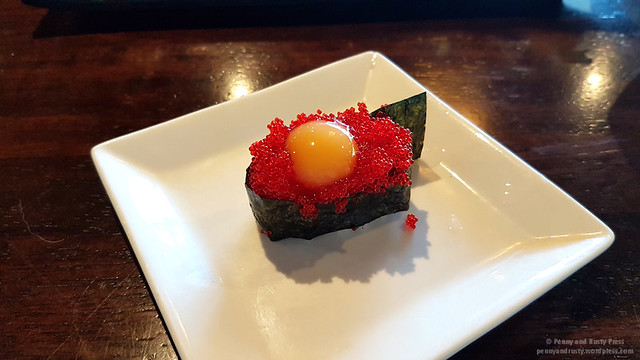 Last up is something that I didn’t order… this beautiful piece of Red Ahi Tuna nigiri topped with green onion was a complimentary item from the restaurant. I guess they saw me taking a bunch of pictures (or perhaps they just approved of my ordering skills). In either case, this was definitely the star of my meal as the tuna was really fresh, rich, and practically melted on my tongue. 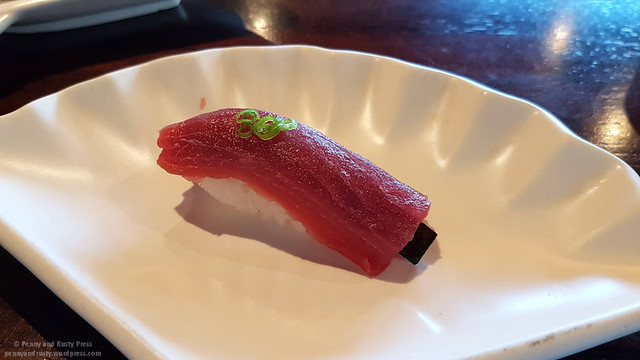 Overall, some nigiri items are better than others (red ahi tuna is a must!) and I found that the sushi rice was a bit on the harder side.

I came back about a month later to try some of their other dishes. First up was the Agadashi Tofu ($4.40). Like the sunomono that I had on my last visit, this serving size was quite generous for the price. I found that the tofu cubes had a crisp outer casing but, inside, the tofu was firmer than I expected (I’m used to the tofu being softer on the inside). The tofu sat in a broth of tempura sauce and were topped with bonito flakes and green onions. 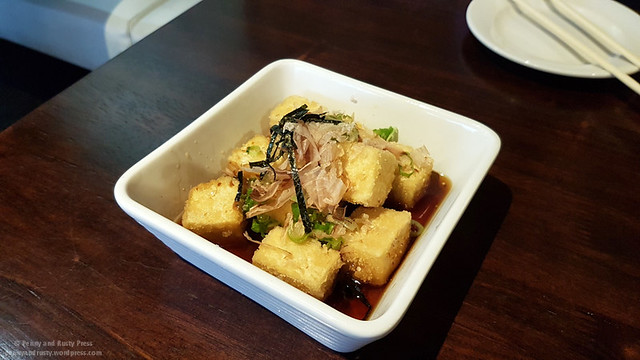 The Goma-ae ($3.80) had the boiled spinach artistically perched on top of the peanut sesame sauce. 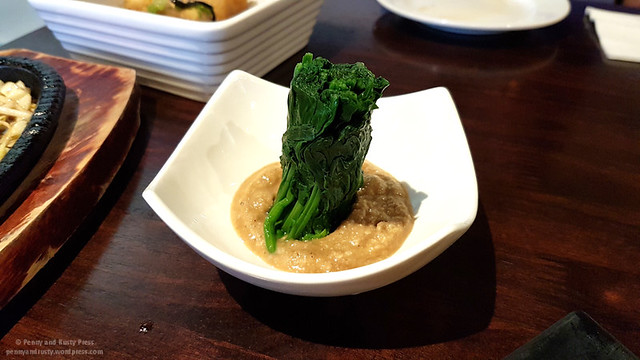 I found that the Chicken Teriyaki ($9.30) with grilled chicken stir-fried with vegetables, bean sprouts, cabbage and carrots (comes with miso soup and rice) was a bit too watery. Perhaps this was from the inclusion of the large amount of cabbage and sprouts? The chicken was on the thin side and lacked a crispness to the exterior. In addition, there was only one tiny sliver of carrot so I feel like they shouldn’t have even mentioned it as being in the dish. I’ve had better but it would do in a pinch. 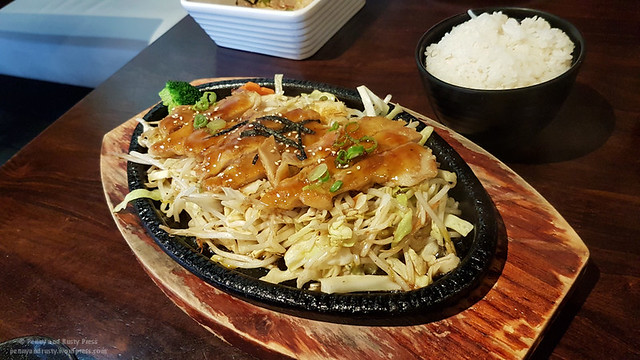 The Yakitori ($5.50) was another “meh” dish. I found that the chicken was on the chewy side and needed some more char on the exterior. 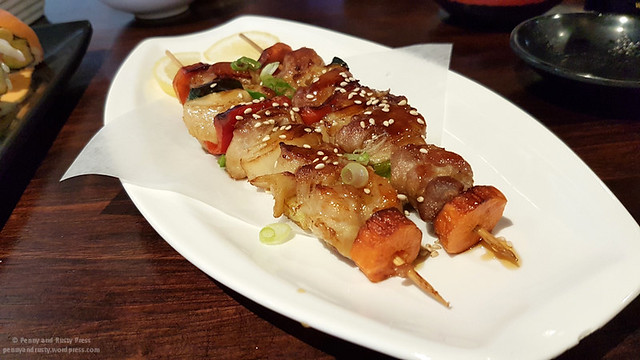 Last up is their Rainbow Special Maki Roll ($11) which included seven types of sashimi on top of an avocado and tamago roll. The roll diameter was on the small side but it was definitely creamy from the avocado and egg. I think this roll would have been better if the inside of the roll was more like a California roll instead. 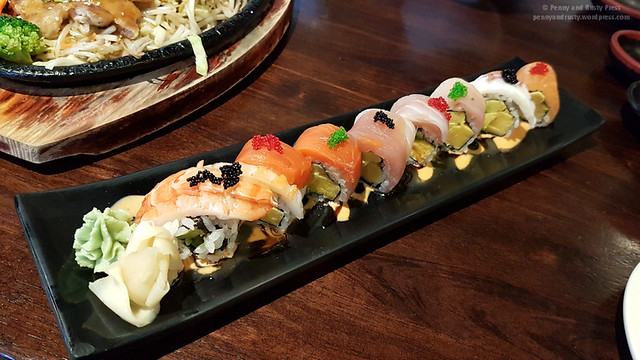 I can’t deny that the colourful tobiko on top of the roll was a nice touch. 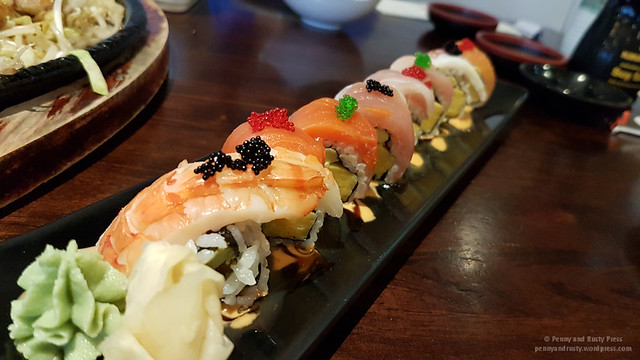 Most of the dishes on my second visit were hit-and-miss so you might need to be careful with the dishes that you order here. Fortunately, the price point seems fairly good.