The Vancouver Christmas Market is becoming a bit of tradition in the city. But, as with most traditions, change is always inevitable. In this case, the big change for 2016 was the change in location from the Queen Elizabeth Theatre Plaza to the Jack Poole Plaza (site of the 2010 Olympic Cauldron). 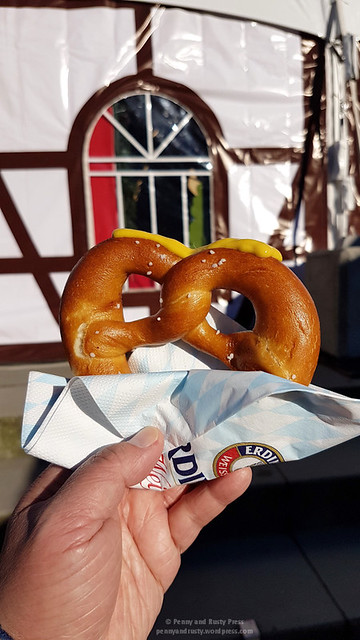 The Christmas Market bills itself as German-inspired so we were looking forward to checking them out this year mainly for the food. While they do have a limited number of non-food related stalls selling knick knacks like soaps, jewellery, and ornaments… I don’t think there’s a huge selection of non-food stalls.

It costs $8 per adult to get into the market but that includes a season pass so you can revisit (handy if you live or work downtown). Definitely a good option to buy the tickets online so you can bypass the lineup to buy tickets at the market.

Pretzels have always seemed like a quintessential German snack so that’s where we started our visit… at the Bavarian Beer & Pretzel Haus. Let me just say that this pretzel was rather disappointing. I expect freshly baked pretzels to be warm and soft in the middle. Unfortunately, this pretzel was rather cold and dry. I’ve had better pretzels from the mall (like Little Monk Pretzel). Perhaps it was due to the frigid cold morning that we were having but I’d definitely pass on this one.

On the other hand, one of the best things that we had at the Christmas Market this year was the Chimney Cakes. We’ve seen pictures of similar chimney cakes during the summer night market but I’m not sure if they are the same vendor. The chimney cakes here are made-to-order which means you have to wait a bit for your order but everything is fresh. It’s neat seeing them wrap the dough around the rotisserie spit and them spin around the grill until they’re baked to a golden brown. 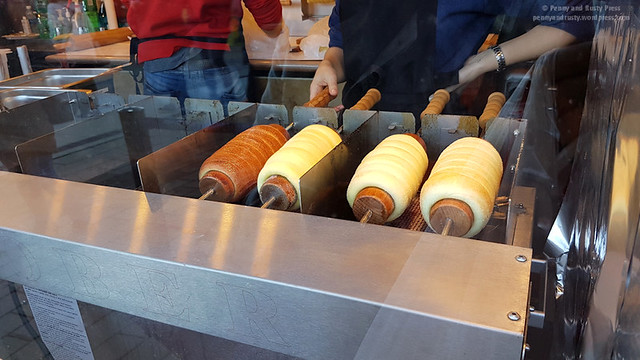 We had ours dusted with cinnamon and then added lemon curd to the middle. They just spread a coat of lemon curd on the inside so it’s not overpowering. This was soooo good! You just peel off a piece of the chimney cake and you get a crispy exterior and warm and soft interior. They also have nutella filling if you’re more into chocolate but I think I prefer the lemon curd. 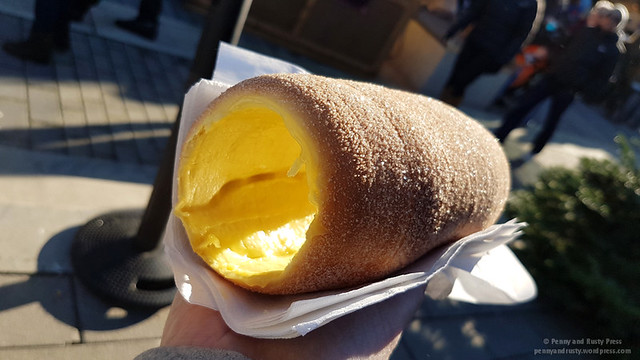 Since our admission included a season pass and we were off during the week, we came back a couple of days later to try out some more food. The weather was bright and clear but bitterly cold so we figured we should get something hot. Das Gulasch Haus looked like the best bet… come on… who doesn’t love food served in a bread bowl? They were having a special for their Austrian beef stew at $11 and the amount of beef that you get in the stew is generous. Since we arrived just past 11am during the weekday, there weren’t any crowds so it was easy to find a spot at one of the nearby covered stand-up tables. 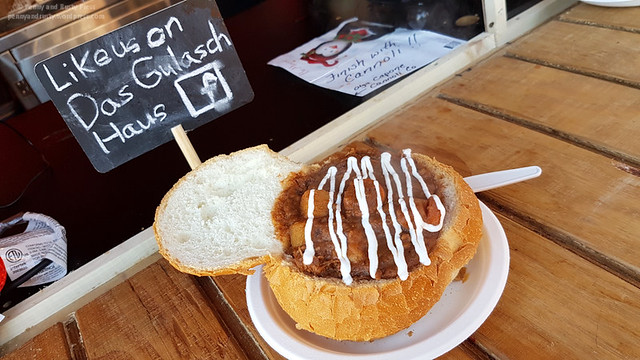 No visit to a German-inspired Christmas Market would be complete without a brat so we headed over to the Freybe Brat Haus. This company, whose products you can also find in the grocery store, has been around for 172 years so they know brats. We ordered the original das brat for $8 which is served on a bun with sauerkraut and grilled onions. The brat was a bit on the small size but had a hard time staying in the small bun that was provided. 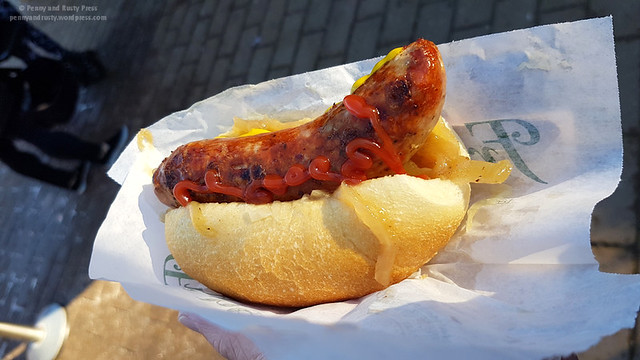 We also had our eye on the Perogies Haus because the smell of grilled onions was wafting through the air. Since we arrived right when the market opened, the perogies weren’t ready yet and we had to come back ten minutes later to grab this order. 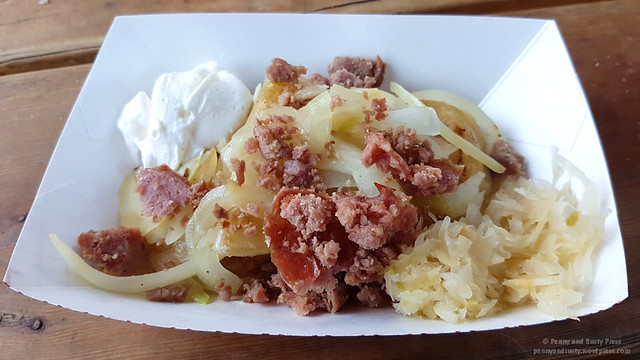 They do have some rides for the kiddies or the young at heart but if you’re like me, the main reason to come here is for the food. Although our first visit started out a bit slow, there are some good food options here and there are plenty more that we didn’t even have time to try.

The Vancouver Christmas Market is open until December 31st this year (ironically closed on Christmas Day).