For any sashimi connoisseur, a trip to Tokyo wouldn’t be complete without a visit to the Tsukiji Fish Market, the largest wholesale seafood market in the world. We had heard that there were plans to move the fish market in November 2016 (our planned trip to Japan) mainly because the market occupies a large section of valuable real estate in the Chūō ward (centrally located in the heart of Tokyo), but the move was fortunately postponed.

In the past, tourists used to flock early in the morning to see the tuna auctions in the inner market. But due to the overwhelming number of people who wanted to watch, they had to limit/curtail tourists from the auction to prevent accidents and interference of the auction. Seeing as how we weren’t interested in waking up so early in the morning, this wasn’t an issue for us… we just wanted to eat some fresh seafood.

Since the seafood auction opens early in the morning, many of the restaurants in the outer market are open early as well and close up by early afternoon. So if you’re looking at trying some super fresh sashimi, it’s best to come here early.

We saw a number of restaurants where the lineups snaked up and down the crowded narrow lanes but we weren’t about to wait hours just to get in. Fortunately, we found one restaurant where there wasn’t a lineup (yet) and managed to snag 4 seats at the sushi bar. 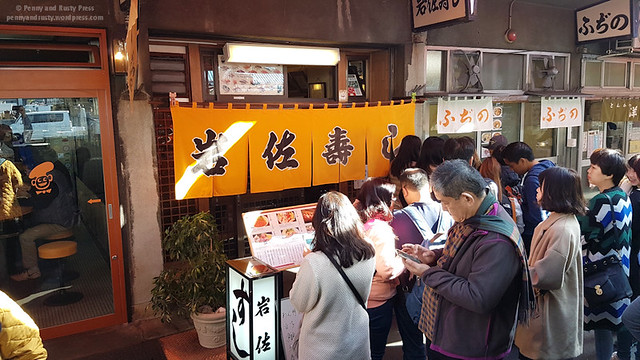 It’s a good thing that we found this place when we did because by the time we left, the lineup had started to build up outside this restaurant. Iwasa Sushi has been in the Tsukiji Fish Market for 20 years and it’s clear that their seafood is super fresh from being located in the market. 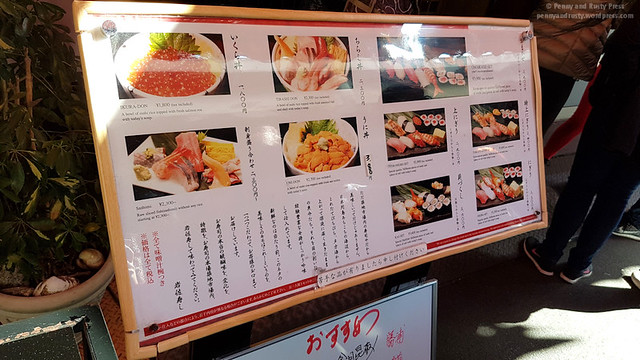 It’s really cramped in here with just enough room for a sushi bar and 14 seats. This affords you with a good view of the sushi chefs as they prepare your dishes. 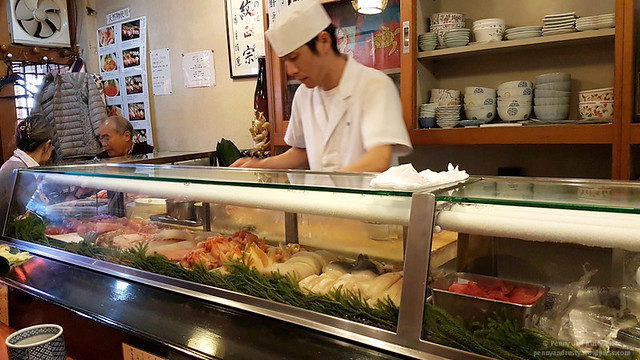 We decided on ordering the Omakase Set (¥3900) and the Chirashizushi don (¥2300). I originally planned on just ordering one of the smaller nigiri sets but they upsold me with the omakase. Don’t ask me how considering that they only spoke Japanese. Truthfully, however, I’m glad that I went with the omakase. 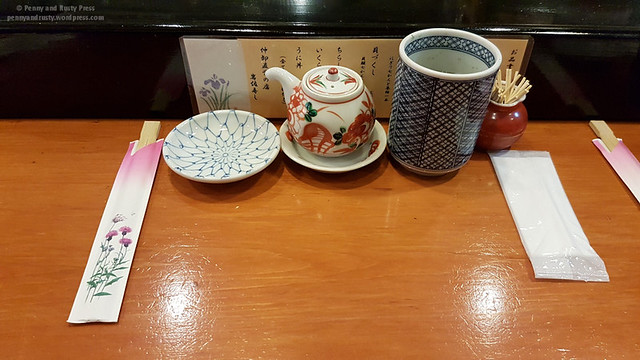 Before I get to the omakase, let me just talk about the Chirashizushi or sashimi on rice. I thought that I liked the one we had at the Isomaru Suisan but this version was so much better. There was snow crab, sweet shrimp, tako, tuna and a bunch of other fish that I couldn’t identify. 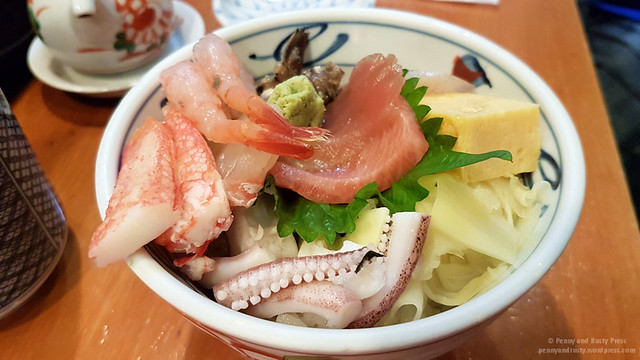 Omakase is basically letting the chef decide what to serve you. It comes with 12 pieces of various nigiri as well as 6 pieces of maki sushi and miso soup. 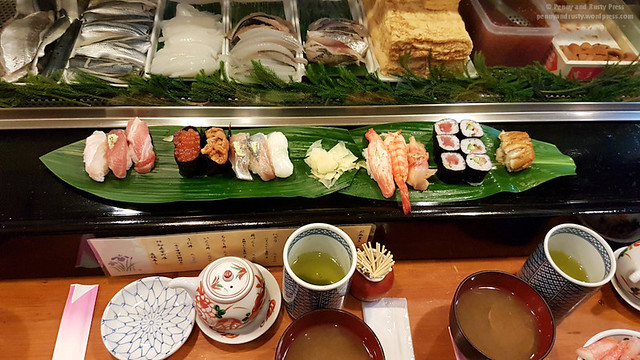 By far, this was the best uni (sea urchin) that I’ve ever tasted. Nothing that I’ve tried in Vancouver has even come close to how fresh, sweet, creamy and rich this uni turned out… it literally melts in your mouth without any fishy taste. 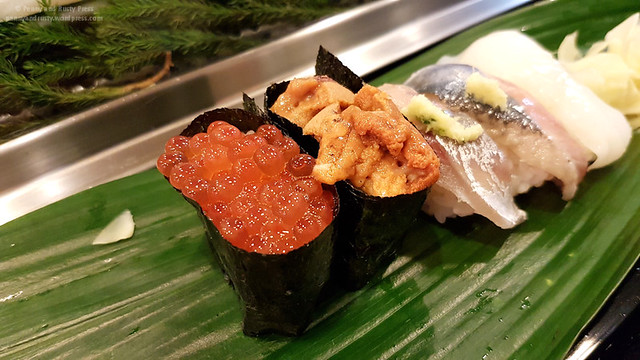 Of course, the tuna was superb as well… having a nice buttery taste from all of that fat. 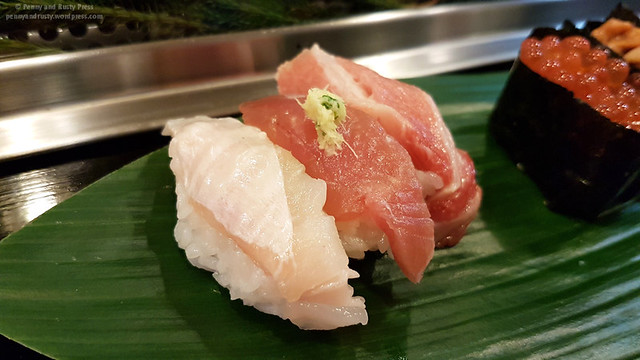 This was actually quite filling with the maki sushi (the unagi nigiri is pictured in the background). 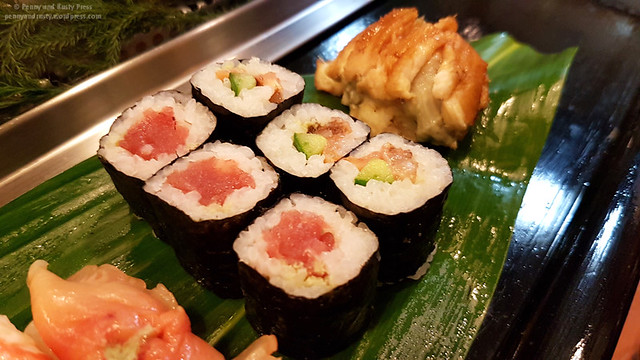 I don’t think I’ve ever seen snow crab nigiri before in Vancouver. Since you get 12 different pieces of nigiri, I highly recommend the omakase for those people who like to try a variety of items. 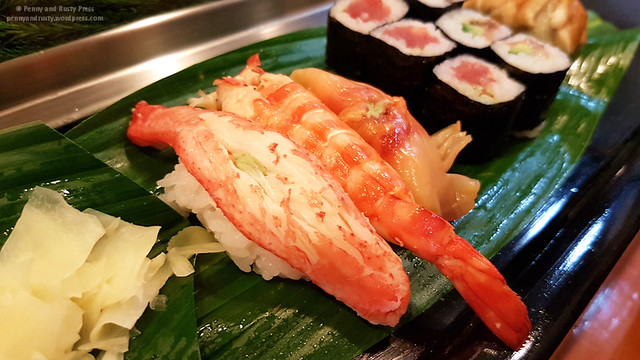 The owner surreptitiously handed us this jar of sauce after we paid for our meal… I’m guessing because we had ordered the omakase set. The price of the omakase set worked out to about $45 CAD but was well worth it given the quality of the seafood here. I’m not entirely sure what’s in the jar (thinking it’s some kind of wasabi oil or something similar). 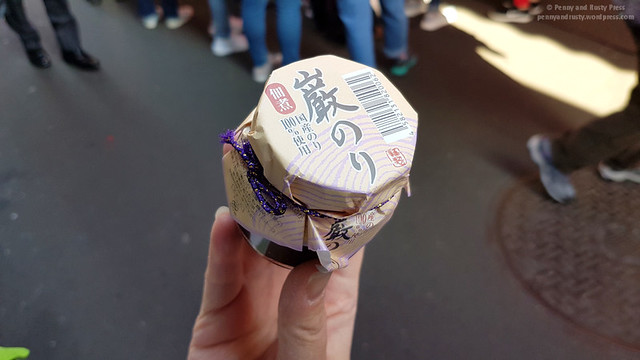 Pretty much any sushi restaurant in the Tsukiji Fish Market is going to blow your mind away but I was very pleased with our meal at Iwasa Sushi and I’m definitely craving the fresh seafood from here right now.