Recently, I heard about a new Filipino restaurant that opened in the Queensborough area of New Westminster called Epic Grill Silogs. Now, I’ve never had silogs before but I could only imagine that, whatever they were, they must be epic… after all, it’s in their name! Silogs are a type of Filipino breakfast dish comprised of garlic fried rice and a fried egg (sinangag + itlog) combined with various meat options. And Epic serves up a large variety of them.

The restaurant is located in the middle of nowhere, literally. When you first come down this road, all you see are rows and rows of houses (some new and some old – it looks like they’re going through a rebuilding phase here). The interior isn’t much to look at… kind of reminds me of an old diner. And while there’s generally a fair amount of seating here, when it gets busy, you can expect to wait since service is a bit slow. 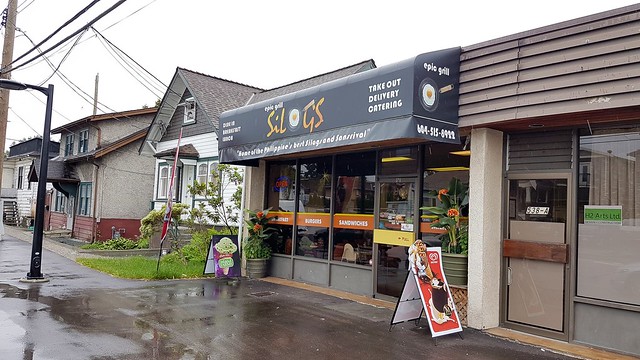 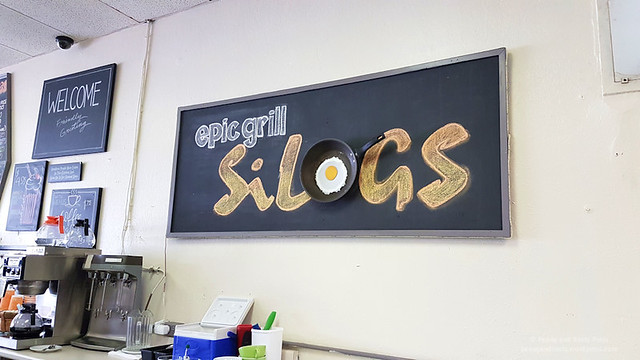 On my first visit, I sat at the counter since there were no tables open. This usually isn’t a big deal for me but I’ve got to say that their wobbly counter stools suck big time. It’s like trying sit on a rock that’s ready to fall any second. Not being very familiar with Filipino food, I decided on a Combo 1 ($14.95) which includes garlic fried rice, two fried eggs, and any two meat silogs of your choosing. I opted for the Tapsilog (which was described as marinated beef jerky) and the Lechonsilog (deep-fried pork belly). 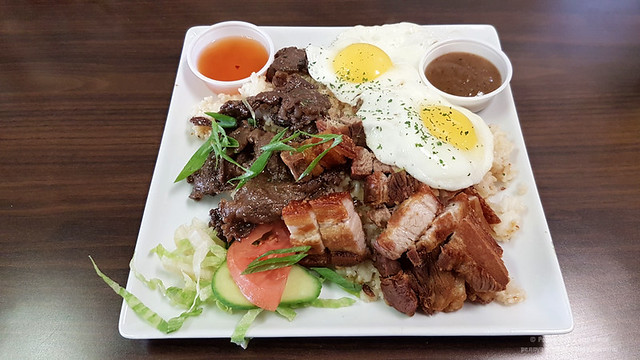 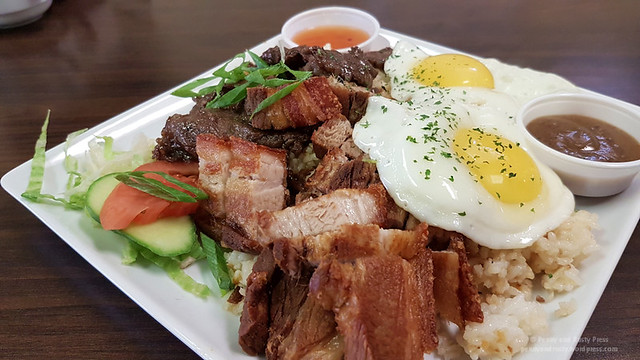 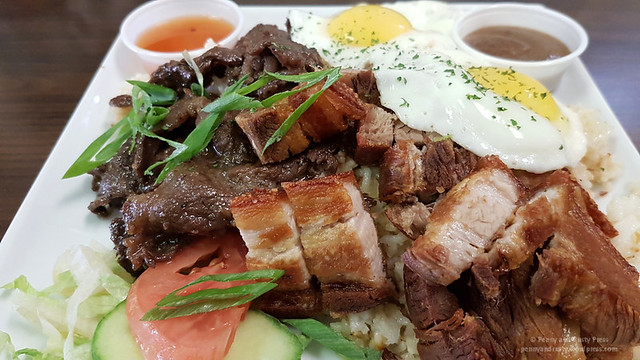 The Tapsilog didn’t really remind me of beef jerky but I’m glad I ordered it. It appears to be similar to thinly-cut, marinated beef. It was the deep-fried pork belly that I was really into. Mmm! Crispy, fatty, pork that has a super crunch to the pork cracklin’. If you’re familiar with Chinese BBQ pork, just imagine the whole piece of pork having a nice crisp exterior while still being tender on the inside. Underneath all of that meat and fried eggs is the garlic fried rice 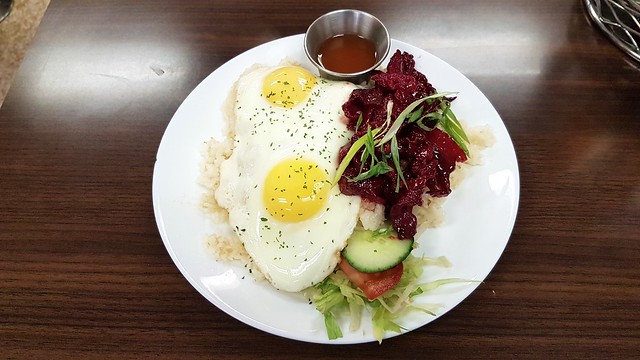 I was so happy with my first meal here that I came back 3 days later for lunch again… wanting to try some of the other items. On the next visit, I opted for just one silog… the Tosilog ($9.95) which is described as marinated sweet pork jerky on the menu. Just like the tapsilog, the tosilog didn’t remind me of jerky at all. It’s a thinly-sliced pork which has been marinated in a sweet sauce, giving it a deep red colour. The pork is a bit fatty, but not as noticeable as in the lechon. Overall, it’s quite good… especially when you combine it with the vinegar sauce or the hot banana sauce that they have at the tables. 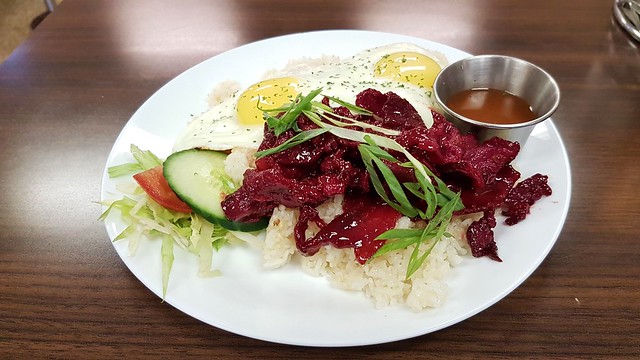 We came back for a visit on a Saturday and this place was quite busy around the lunchtime and we wound up waiting for a short while before we were sat at the counter. After ordering our meal, we waited, and waited, and waited some more. It was probably about a 45 minute wait until our food arrived after we ordered it. I’m not sure why it took this long because on my last two visits, the food came out quicker than this. On the plus side, by the time our food came out, some of the tables cleared up and we were able to move to one of the open tables.

We stuck with the two silog combos because they seemed to be the best deal. The Lumpiasilog and Lechonsilog is great if you like fried foods. Lumpia are the crispy spring rolls (you get 5 of them). 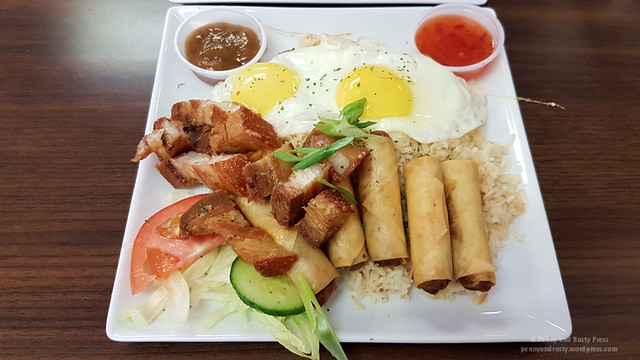 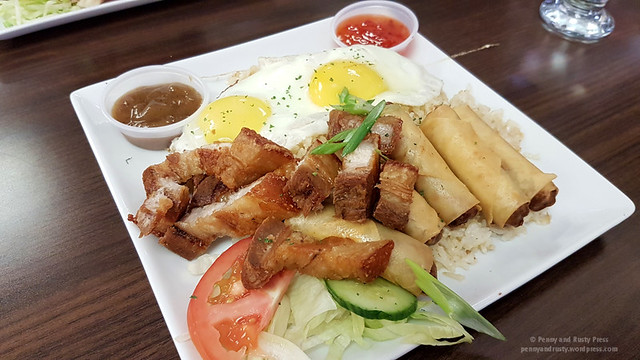 Meanwhile, we paired the Tapsilog (marinated beef) with Wingsilog (you guessed it… chicken wings). 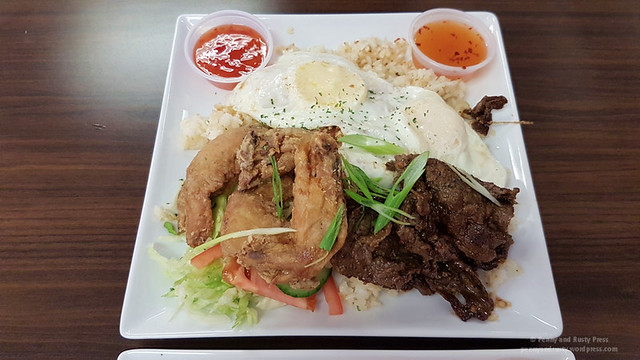 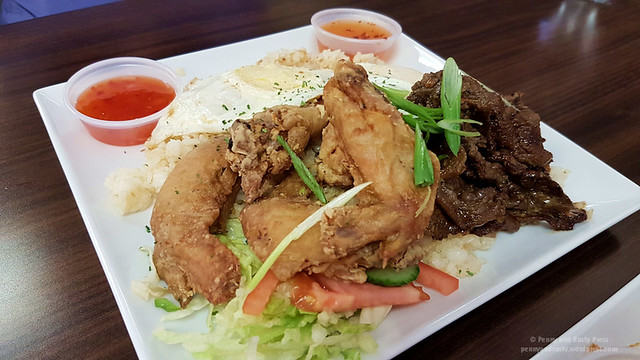 The food here is pretty good if you’re looking for silogs but the menu doesn’t vary much from their focus on silogs. Given that, you’d expect that the food would be rather quick to come out but I found that when it gets busy, service can draw out to a snail’s pace. I’d suggest going when they’re less busy to avoid the crowds (they’re closed on Wednesdays but Thursday wasn’t too busy when I went during the lunch hour), especially on the weekend.