Okay, before I do any ranting on this post of the new Jinya Ramen Bar in Metrotown, I will have to admit that we visited in early September when they had just opened the prior week. Amazingly, the lineup was quite long when we arrived (and we arrived just before they opened).

The main reason for the lineup was that they didn’t have their sh*t together. As I mentioned, we arrived at their opening time and they had not opened the doors yet. It took about 20 minutes to get to the front of the line but this was because they took an extremely long time to seat the customers in front of us (they really need to work on getting more efficient at seating customers). By the time they got to us, they said that they were all full so they took our name and phone number so they could text us when a table was free (which turned out to be 30 minutes later). Admittedly, I did like this as we could see how many parties were ahead of us with the app.

When we finally got seated, we were told that they only had a very limited menu (only chicken and veggie ramen) – which kind of seemed odd… why open if you don’t even have most of the items on your menu? There’s a large communal table in the front of the restaurant with some separate tables in the back. It can get a bit cramped at the communal table and I’m not a fan of the elevated height (there are a couple of hooks that you can use to hang your bags but if that doesn’t work for you, you just have to drop your things on the floor).

I picked the Chef’s Special Chicken Karaage Ramen ($14.80) which comes in a chicken broth with crispy chicken dressed in chili sauce, green onion, bamboo shoots (2), seasoned egg (1/2 egg), nori dried seaweed, and served with a thin ramen noodle. Strangely enough, when I ordered, I was told that they were out of bamboo shoots and needed to substitute spinach instead. As it turned out, I did have bamboo shoots in my bowl… I wonder if I got someone else’s bowl or if they were just mistaken. In either case, this ramen dish was pretty good and was served piping hot. The main issue with this dish is that the chicken starts off crispy but quickly loses the crispness from being in the broth. I would have preferred if the fried chicken was served on the side which would allow me to control how quickly the chicken needs to be eaten. 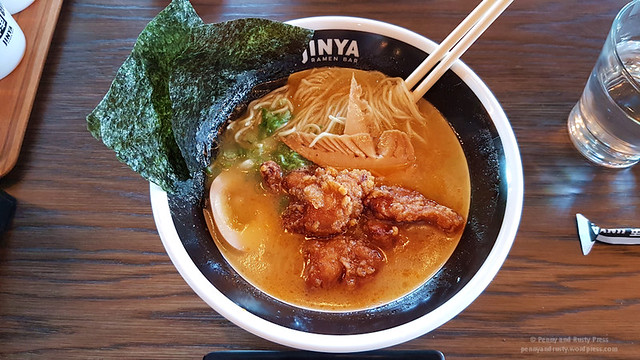 Next up with the Old Skool Ramen ($13.80 + $1.50 for corn) in chicken broth with fish oil, pork chashu, egg, bamboo shoots, green onions, and thin ramen noodles. While the pork was quite tender, I found that the broth was much too salty for my preference. 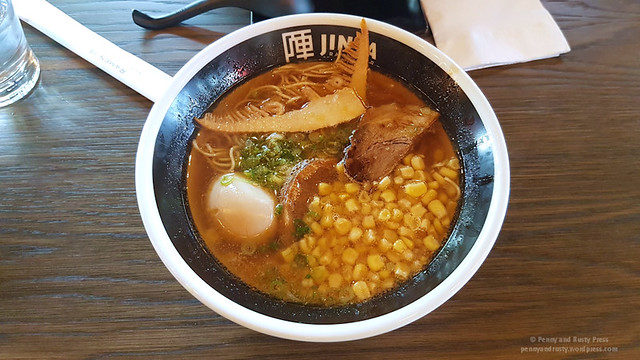 Wanting to try some of the rest of their limited menu, we ordered the Caramelized Cauliflower ($6.80) with toasted pine nuts and crispy mint leaf. Well, it was okay I guess but the cauliflower definitely lacked any discernible caramelization. 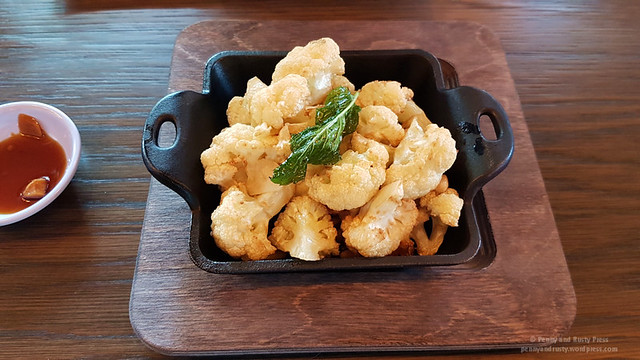 Lastly, we had the Jinya Bun ($4.95) – we had actually ordered their fried chicken bao but they got our order wrong and gave this to us instead. Fortunately, the Jinya bun is pretty good (they cut it in half for us) and has slow-braised pork chashu, cucumber, Kewpie mayo, and mixed greens stuffed in the white bao. I enjoyed the tenderness of the pork but found that it lacked any distinguishing flavour. 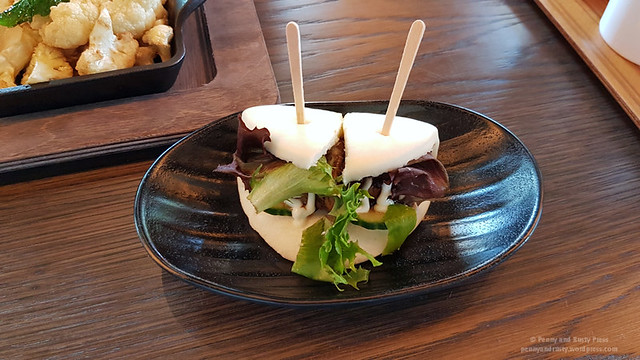 Not having been to any of the other Jinya Ramen Bars around town, I’m not sure if this visit was indicative of their usual standards or if they are still just trying to work out the kinks.