When Barcelos first opened up at Market Crossing, I thought it was just a copycat of the more well known Nando’s. To be honest, I’ve only eaten at Nando’s on rare occasions (mainly in shopping mall food courts) and I’ve never been very thrilled by their offerings.

Well, since I’ve eaten at Barcelos, I figured that I’d might as well try Nando’s too. I visited for lunch in early August and ordered the 1/4 Chicken Leg and Thigh with 1 side ($10). When I first walked inside this establishment, I wasn’t sure if I should sit down or go to the counter at the back to place my order. Seeing as how there was no greeter when I came in, I went to order at the counter. I found it a bit difficult because they didn’t have an easy-to-read menu.

My past experiences with Nando’s were pretty much confirmed by my meal… the chicken was a bit dry, which is odd for thigh meat which is usually more moist when compared to the breast. It was also a very small portion with very little meat. It turned out better after I poured some sauce on the chicken (and I do like their bottled sauces that you can find in supermarkets). The grilled corn wasn’t too bad either. 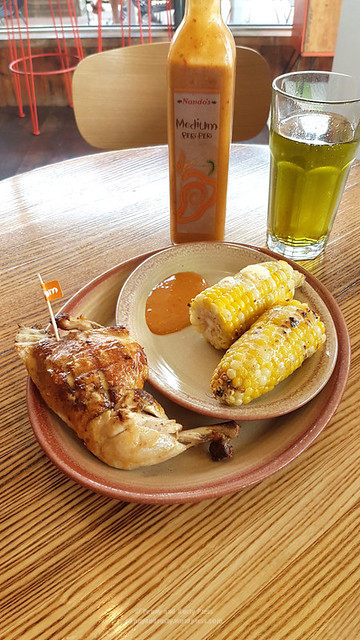 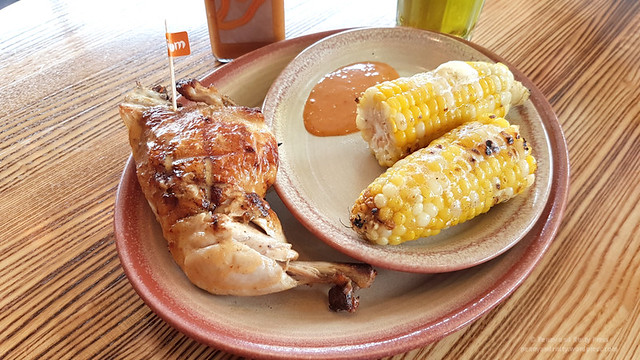 When comparing Nando’s with Barcelos, I’d have to actually give it to Barcelos for better execution of their grilled chicken and sides. Barcelos also has some good peri peri sauce that I’d say was better than Nando’s. On the plus side, Nando’s has a cool pop dispenser where you can pick some neat selections.