Sushi Modo is a newish restaurant that’s popped up in the former Shokudo Restaurant location next to the Amorosa/Greek Santali House on Edmonds Street in Burnaby. The interior is fairly clean with not much changing from the last tenant.

Arriving just before noon on a weekday in late September, the restaurant was empty until more noon-hour patrons started to eventually show up. In the background, they had some up-beat k-pop music playing. 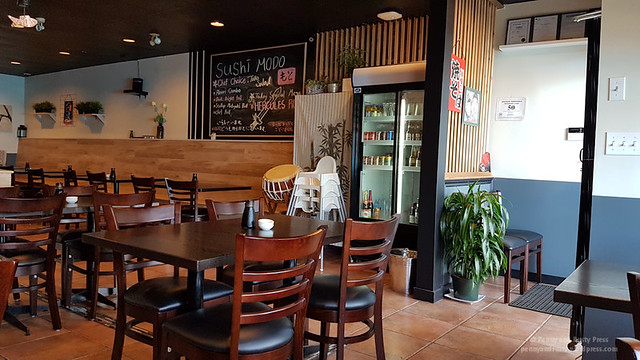 First to arrive at the table, almost immediately after I ordered it, was the Gomaae ($4) with chilled spinach that had a pleasant snap to the bite and a creamy sesame sauce. 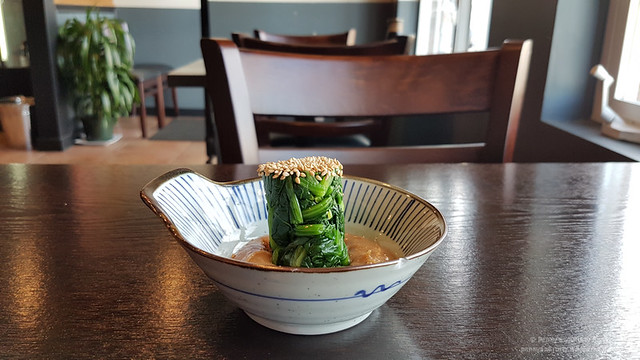 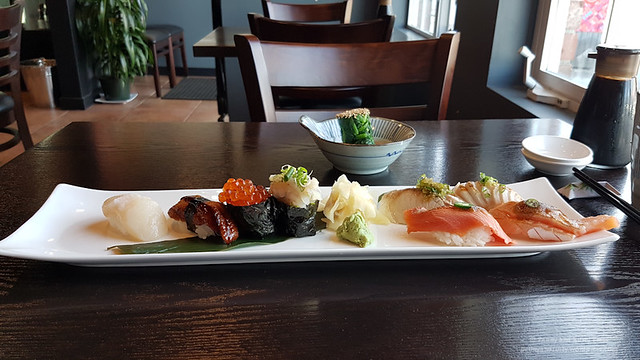 The hotate (jumbo scallop) was quite fresh and clean and I found that the unagi (freshwater eel) was superbly buttery. The fresh negitoro (a mix of chopped tuna and chives) and ikura (salmon roe) nigiri was also well prepared… love how the salmon roe pops in your mouth releasing the creamy centre. 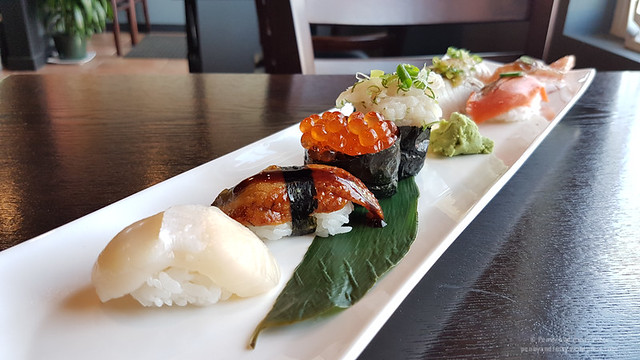 The aburi nigiri selection also turned out really well. While the saba (mackerel) had a slightly firmer texture, it was quite flavourful and had a juicy topping. Normally, I’m more into fatty tuna toro but I found that the aburi salmon toro was the best of the bunch… so buttery! 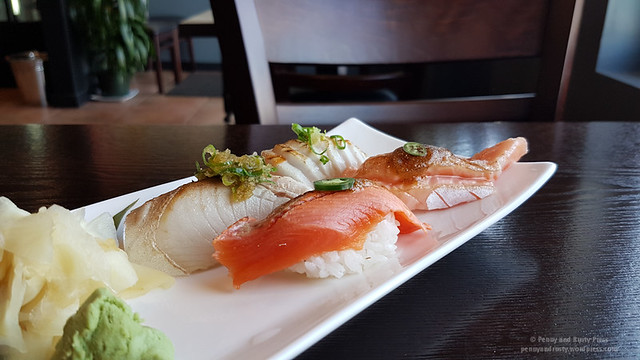 After I was finished with my meal, they brought me out a complimentary aburi ebi nigiri topped with tobiko, Again, a fairly solid piece of sushi with the slightly warmed shrimp from the flame searing. 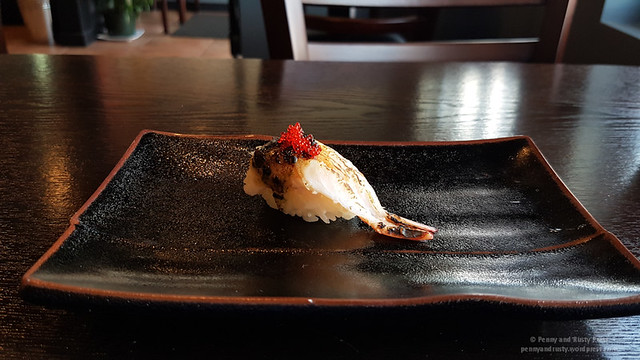 I came back a couple of weeks later and they were playing light jazz music in the background. I wound up ordering the Assorted Sashimi – Chef’s Choice ($14.95). The menu says that it comes with 12 pieces but there were 17 pieces on my plate including salmon, red snapper (I think), tuna, tuna tataki, tako (octopus), ebi (shrimp), and tamago (egg). 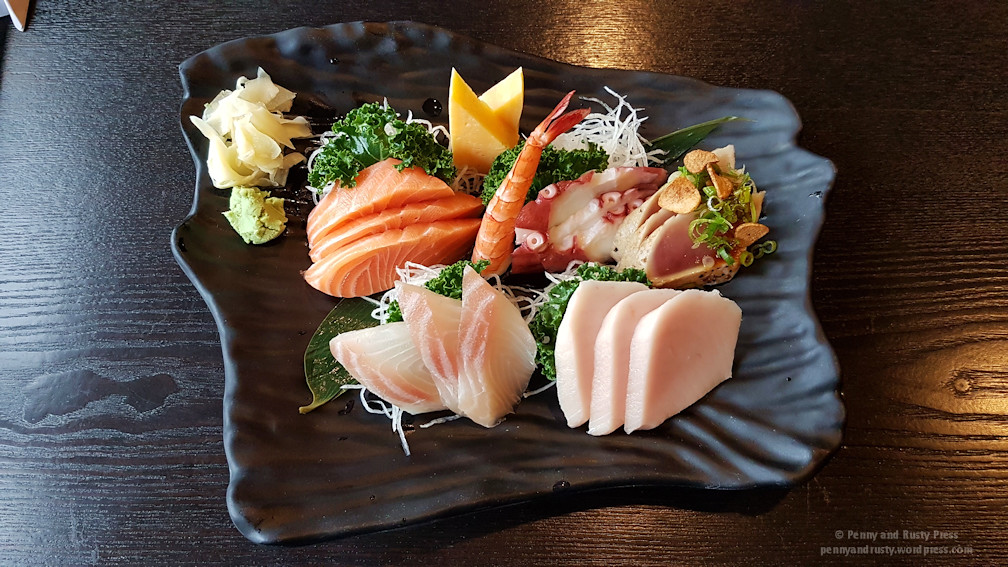 The salmon had a nice buttery texture and the tai and ebi were both quite fresh. While the tako was a bit chewy (leaning towards tough), I really liked the tuna… although the temperature of the tuna was a bit too chilly for me, that didn’t stop it from being super buttery. They were also doing a promo while I visited and I received 10% off (not sure how long that will last).

On a subsequent visit, I decided that I wanted to try some of their other dishes so I ordered the BC Roll ($4.00) which had an ample amount of BBQ salmon skin as well as some crunchy cucumber pieces. 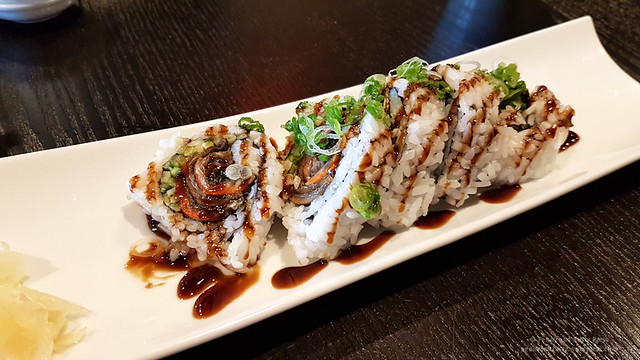 The Don Ko Chi ($10.95) ramen is basically a tonkotsu ramen where the soup is rich and creamy from boiled pork bones. The soft egg added to the richness of the bowl as the perfectly prepared yolk provided a silkiness to the noodles and soup. The pork chashu was pretty good (not the most tender that I’ve had but an adequate job) and was a bit thicker than at some other restaurants. 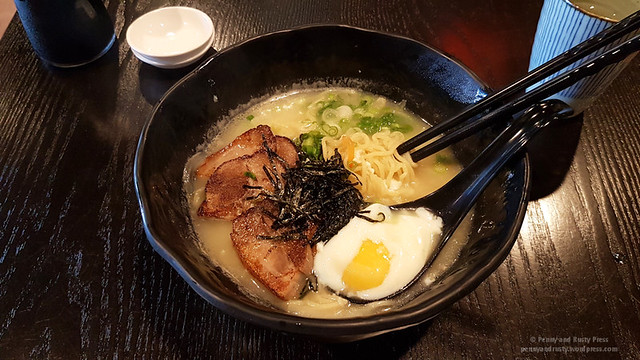 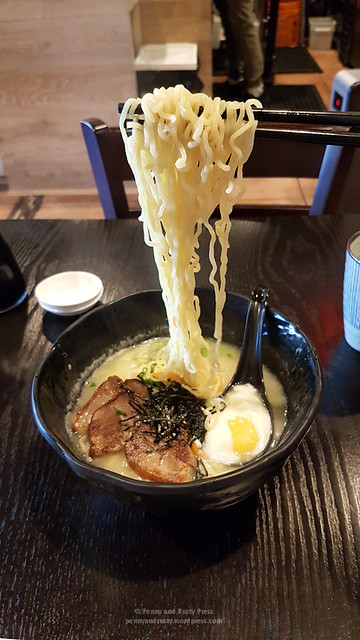 I finally managed to come back to this restaurant a few months later and decided to try their Aburi Sushi Combo ($14) which consisted of saba topped with a fried garlic chip, ebi topped with tobiko, unagi, tuna, hotate, and salmon. 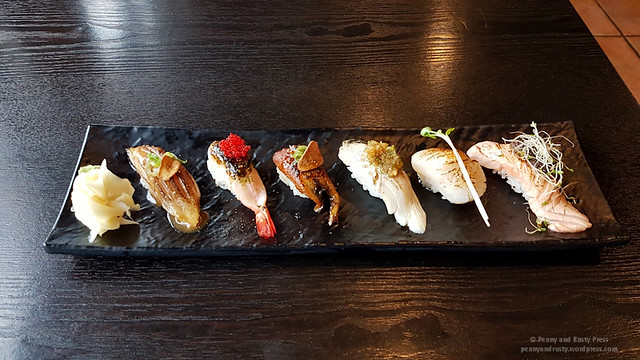 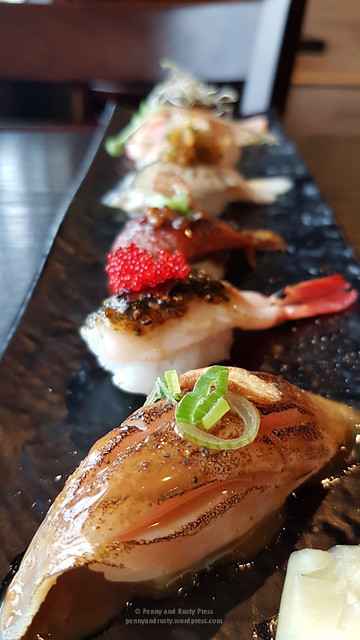 This was such a good selection of aburi nigiri with the unagi, scallop, and salmon being so buttery. 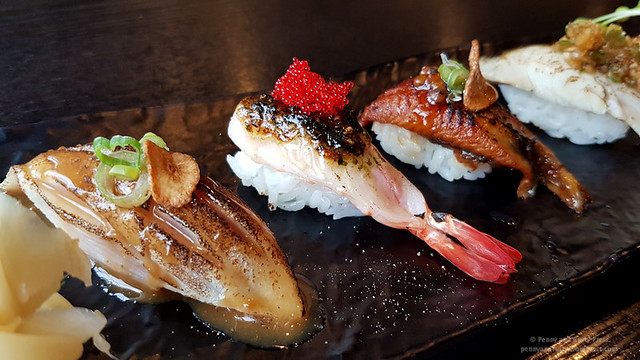 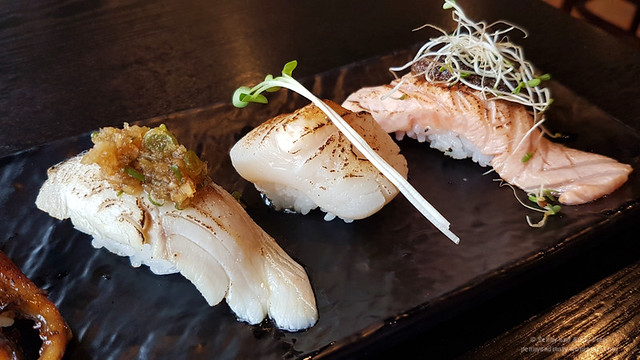 After having tried tuna collar in Japan, I figured I’d give the Salmon Kama ($6.50) a try. Fish collars, although sometimes thought of as throwaway trim, are actually some of the best parts of the fish. The collar extends behind the head and the gills of the fish and usually includes the fins. There’s actually plenty of meat in this area and much of it is super rich and fatty. I was actually a bit surprised at how much meat was in this dish considering the price. The grilling processing definitely brought out the butteriness that is so prized with this cut. 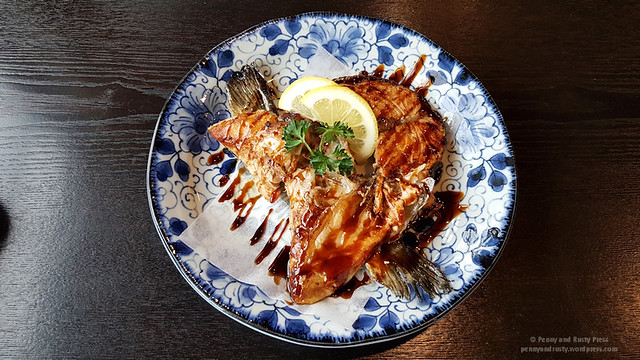 Overall, very solid eats at this restaurant… hope they last.