Stem Japanese Eatery is one of the latest izakaya restaurants that’s opened up in Burnaby, in the former Jules Cafe location on Rumble St. Although there are some fairly good sushi restaurants nearby such as Makoto and Asa Sushi, Stem is far from a simple sushi restaurant.

Having just returned from our trip to Japan last year (and having a great meal at Kaikaya by the Sea), I’ve been eagerly waiting to try Stem. The problem is that they only open for dinner service.

I finally got to try this place in mid-January and I’m glad that we showed up early because we almost didn’t get a table. And what a table it is… cute place settings with the teapots and chopstick rests. Speaking of tea, the Genmaicha (green tea with roasted brown rice) was $3.50 for the table. 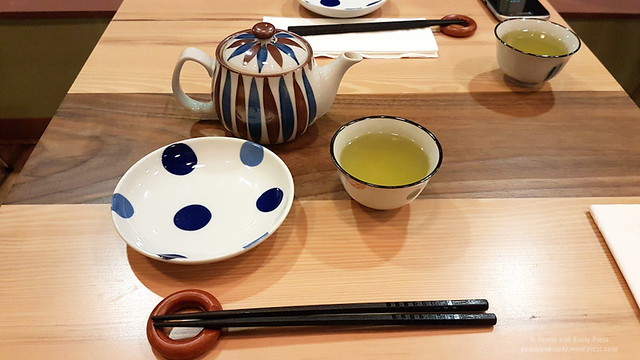 As with many izakaya-style restaurants, their menu is a bit overwhelming. We started things out with the Onsen Tamago ($6.90) which is a 64° Maple Hill Farm free-range egg, dashi espuma (foam), koshihikari rice (a popular variety of rice found in Japan), tamari (similar to soy sauce but with little or no wheat) braised mushrooms, and black truffle oil. The dish is served cold and the egg was cooked perfectly. They say that the perfect way to cook a soft-boiled egg is in a bath of 64° water because the egg white is just barely firm enough to hold a shape while the yolk is just starting to set. 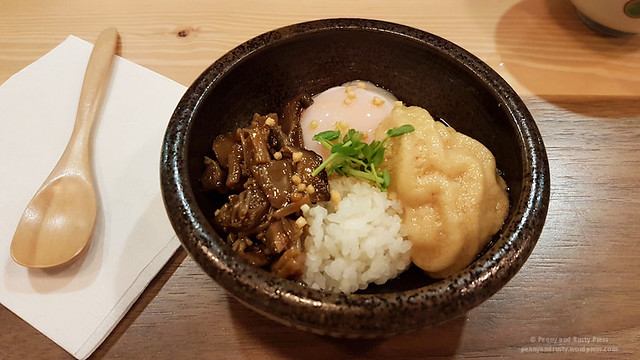 The Agadashi Tofu ($6.90) comes with the deep-fried tofu sitting in a bowl of dashi soy broth and then topped with daikon oroshi (grated daikon radish) and green onions. The ever so slightly crisp tofu skin soon becomes soaked in the broth so it’s a good idea to eat this quickly. 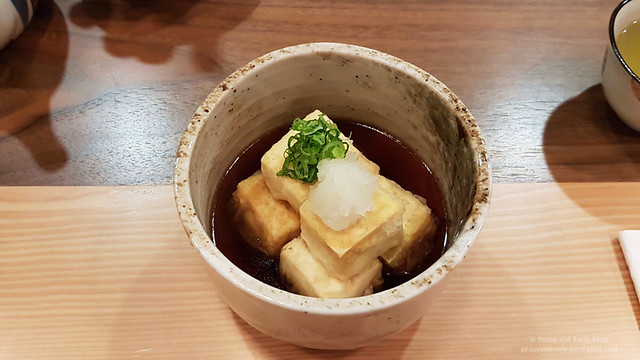 One of the highlights of our meal was the Mizore Chicken ($9.90). Mizore is “sleet” in Japanese and references the grated daikon radish on top which resembles sleet. The chicken had a nice, light crispness which encases the moist and tender free-range chicken. 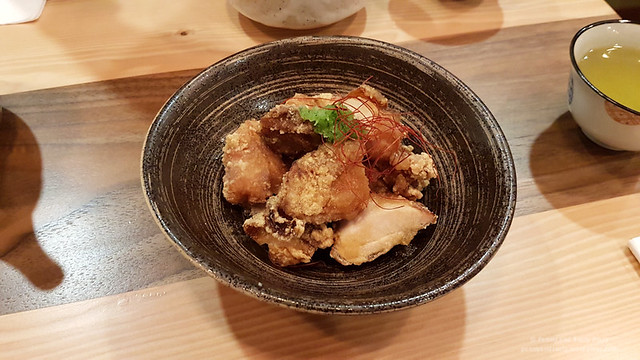 Speaking of great dishes… we knew the Grilled BC Wild Sablefish ($14.90) was going to be good and it did not disappoint. Marinated for 20 hours in a yuzu soy sauce and served with sautéed kale, and seasonal pickles – oh my! Sablefish, with it’s large, buttery flakes, is one of our favourites. I only wish there was more of it on this plate. 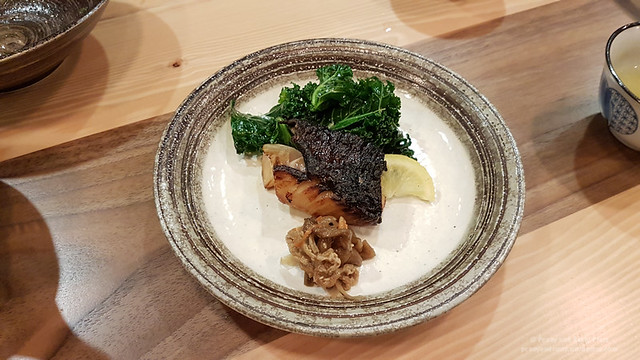 Next up was the Sashimi Salad ($14.90) made with organic greens, ikura, tamago-yaki, green beans, and shiso with a dashi soy dressing served on the side. 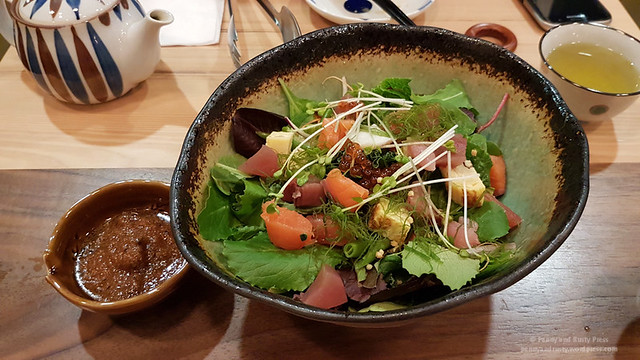 Last up for this night was the Seasonal Vegetable Tempura ($10.90) with Brussels sprouts, parsnip, squash, lotus root, and mushroom. Unlike other tempura that I’ve had in the past, it doesn’t come with a tempura dipping sauce. Instead, they provide you with a green tea salt dip. Although a bit saltier than I’d prefer, it actually went really well with the lightly crisp tempura. 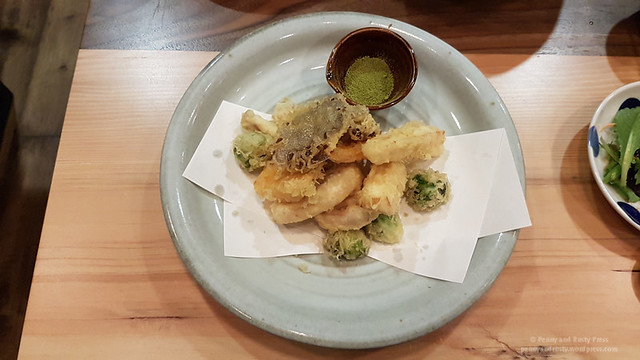 I liked the food here so much that I came back a few days later to try some of their other dishes. Again, it was lucky that I showed up early because this place always seems busy and it’s a good idea to get reservations since they only seat about 36 people. As I was by myself, I dined at the sushi counter which suited me anyways. 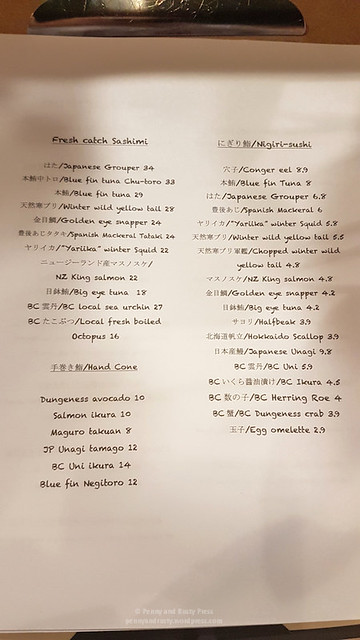 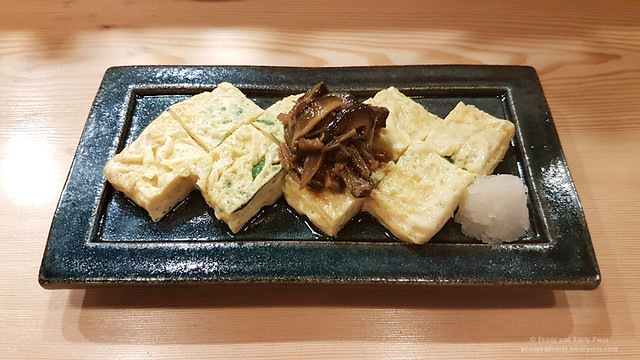 I’m always a sucker for a good egg dish so I opted to try their Dashi Tamago ($8.90) with cold marinated mushrooms and grated daikon. The omelette was pillowy soft and quite enjoyable. 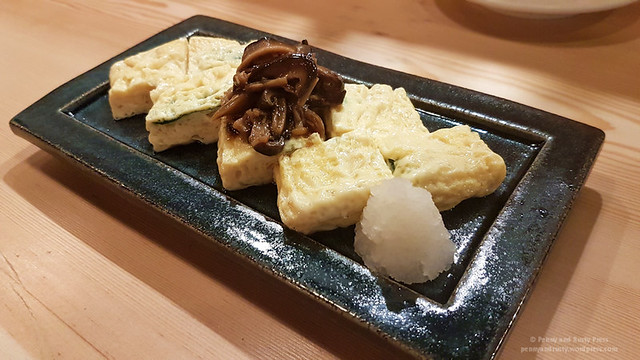 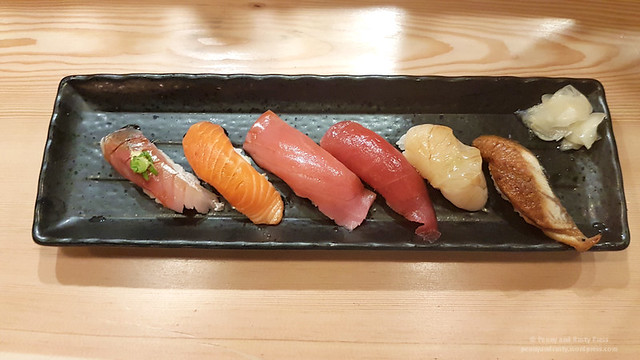 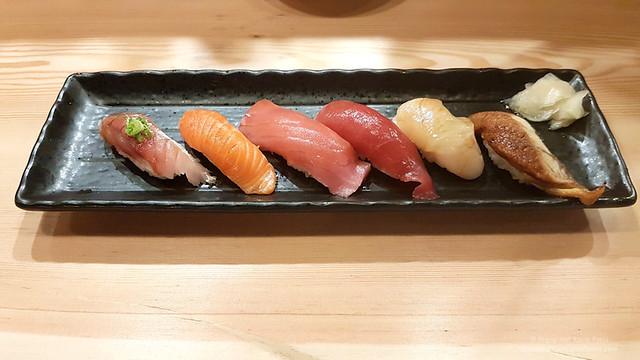 I really can’t find anything wrong with the nigiri here. The beautiful sheen on these quality cuts of fish was well appreciated. The King Salmon (also known more commonly in BC as Chinook) was so smooth and clean. I was also impressed by the blue fin tuna and the big eye tuna next to it (the big eye being more on the leaner side). The nigiri here is prepared simply and they let the seafood speak for itself. 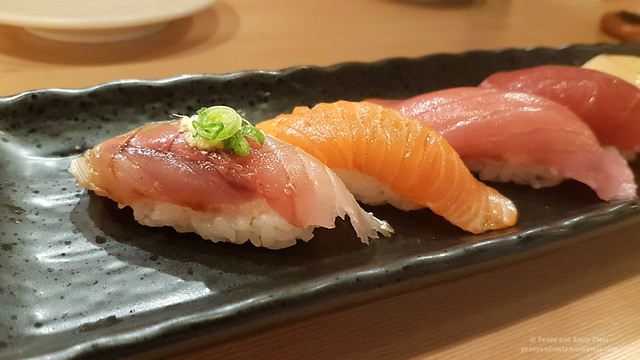 Popping the hotate in my mouth, I realized how buttery and good the scallop was. Even the unagi, which wasn’t served with the typical sweet sauce that most sushi places in Vancouver use, was so simple yet tasty. 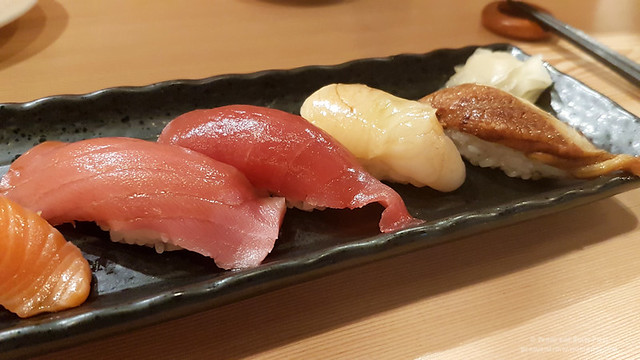 This restaurant is sure to please you if you’re looking for quality Japanese food. That being said, it is on the pricey side. But, while it’s not cheap, it’s well executed. It really brings back fond memories of our trip to Japan.