Back in October of 2017, a new sundubu restaurant called DooBoo opened up in the former location of Kenzo Japanese Noodle House on the corner of Kingsway and Griffiths. Sundubu refers to soft tofu which is usually prepared in a stew in Korean cuisine. You can see their cute mascot on their wall, an anthropomorphized piece of tofu sitting in a bowl of simmering soup like it was a hot tub. 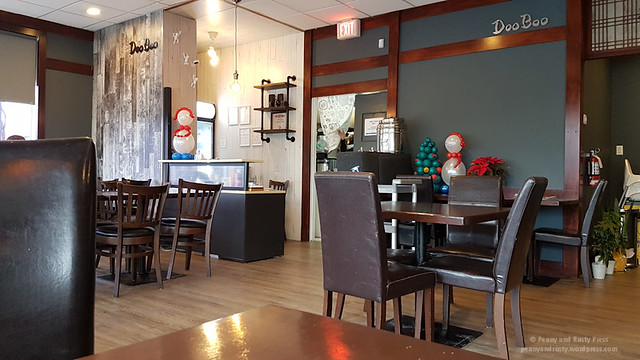 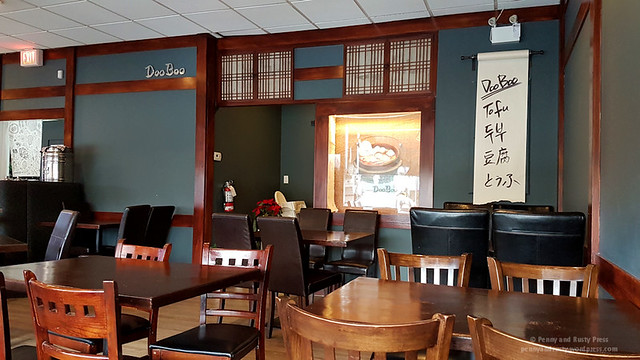 As a Korean restaurant, you get the requisite banchan dishes that accompany your meal. I believe this was kimchi, strips of marinated tofu(?), and pickled veggies. 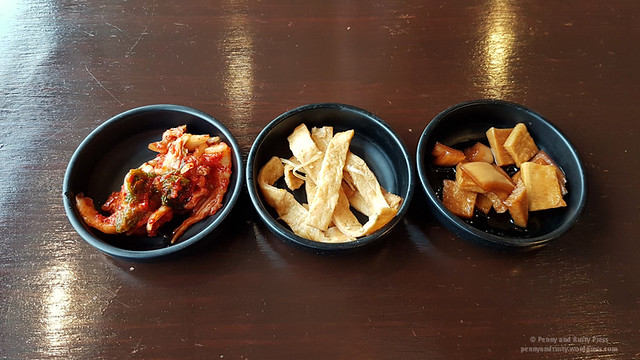 On my first visit, I ordered the Hot Pot Rice with Fish Roe ($12.99). In the stone bowl was egg, seaweed, yellow pickled radish, imitation crab(?), sesame seeds, and topped with lots of fish roe. 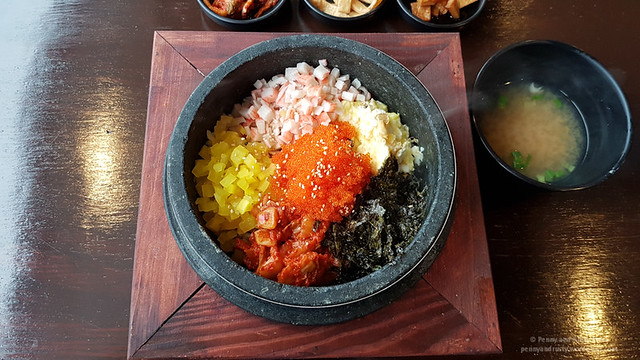 The hot stone bowl gave the rice on the bottom of the bowl a nice crispy char. This was actually a very good albap, a type of dolsot bimbimbap, with each bite filled with popping fish roe. Service was friendly and unobtrusive and they asked if I wanted more miso soup or banchan with my meal. 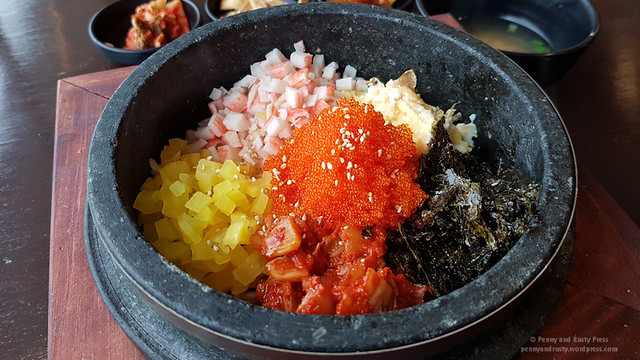 I was impressed enough with my first visit that i decided to come back a week later to try some other dishes. First up was the Deep-Fried Veggie Dumplings ($6.99). These hot pockets had a thin and crisp skin and were served with a soy dipping sauce. 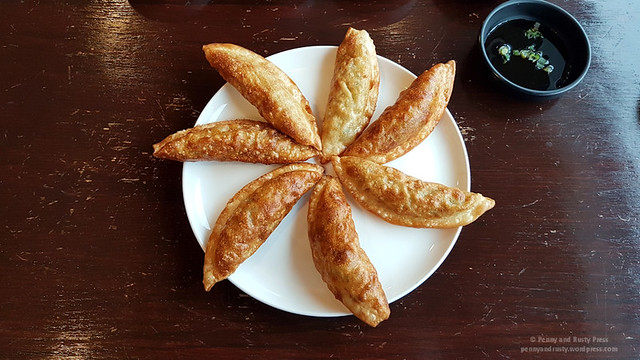 I figured that I had to try their Soft Tofu Soup ($11.99) since this was a sundubu restaurant. I opted for the regular spice level since I can’t really handle what Koreans consider as “spicy”. Inside the hot bowl were five shell-on shrimp, plump clams, and plenty of silken tofu. 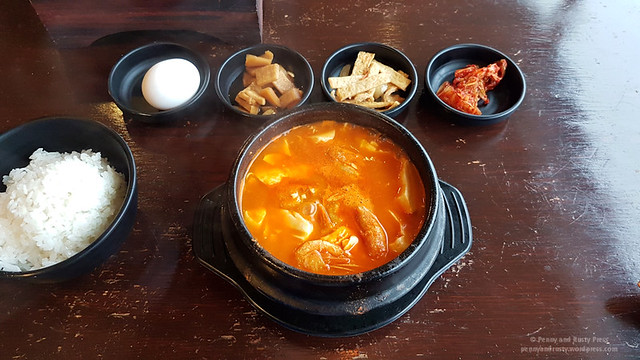 They give you a raw egg on the side which you can crack into the soup. I was a bit concerned that I’d wind up breaking the egg and making a mess but I managed to get it all in the bowl.

This dish also comes with a hot stone bowl of rice known as Noo Roong Ji or burnt rice. After developing a crispy coating, most of the rice is removed and the remaining crispy bits are left in the bowl. You’re supposed to pour hot liquid in the bowl and mix it with the crispy rice to form a soup that you have at the end of your meal to aid digestion. I think it’s a bit of an acquired taste as there is literally no flavour to this rice soup (and it’s not like creamy congee). Plus, the soup defeats the crispiness of the rice that I actually do enjoy. 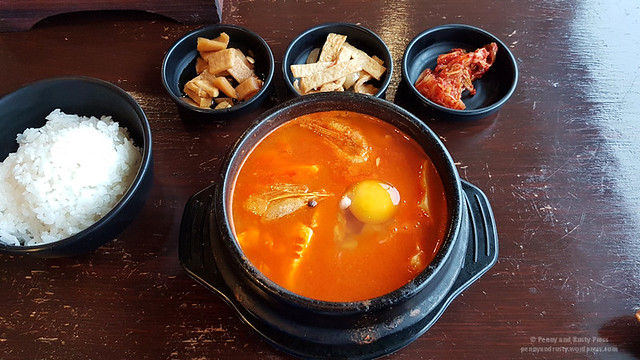 As for the tofu soup, the combination of spice and molten tofu kept my tummy warm for hours. Definitely a cold-weather comfort dish.

I decided to make it three weeks in a row and came back for a revisit to try their Japchae ($15.99) with sticky yam noodles and seafood (you have the option of what kind of noodle you want and the topping). 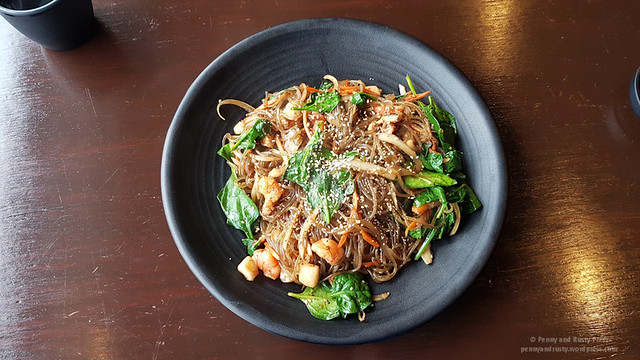 My seafood japchae came with chopped shrimp, octopus, and clams (similar to what you would find in their tofu soup dishes. While the noodles had the expected chewy texture that you’d expect for japchae, I found that the seafood was overcooked and a bit rubbery. Perhaps their chicken or pork versions would be a better option. 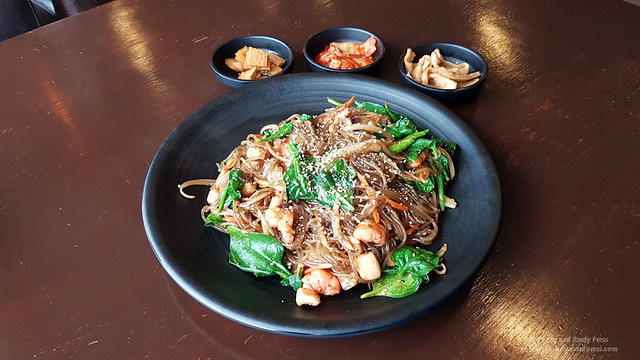 A couple of months later, I came back and ordered their Chicken Bulgogi with Tofu and Ground Pork Soup ($18.99). The soup was basically the same as the soft tofu soup that I had previously… plenty of soft tofu in a piping hot soup (just with ground pork instead of seafood). Like my earlier visit, it also came with a raw egg to crack into your soup as well as Noo Roong Ji (burnt rice). I actually preferred this version over their seafood one. 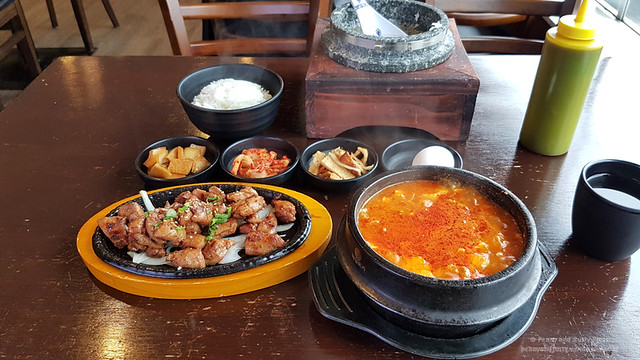 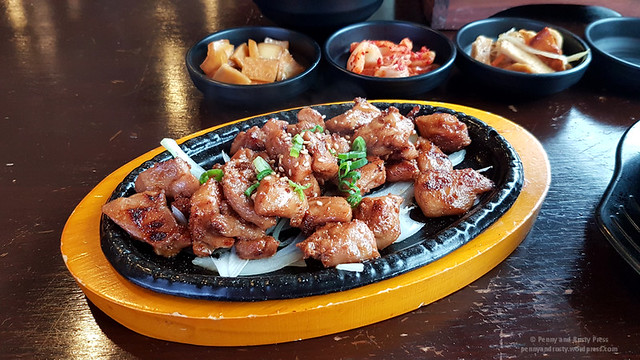 Overall, most of the food items here seemed well prepared and accompanied with friendly service.