I’ve often said that the corner of Kingsway and Salibury in Burnaby is like the Bermuda Triangle for restaurants. I’ve lost count of how many restaurants that have come and gone in this spot. Well, a new restaurant showed up here quite some time ago but I’ve kind of avoided it… wondering if it would close like all of the others before it.

I finally brought myself to visit in mid-January. Similar to nearby Myst, Queen’s Cafe is an asian fusion restaurant that tries to please everyone without standing out in any particular style. Expect to find westernized Chinese dishes, Thai, Korean, etc… dishes here with a fairly extensive menu.

I picked from their special lunch menu on my first visit and was rewarded with complimentary soup and spring roll. The soup is the type of vegetable and bone broth that’s commonly served at the start of a home-cooked Chinese meal. Nothing really outstanding but it does the trick to warm up your body. The spring roll was freshly fried with a thin and crispy wrapper. 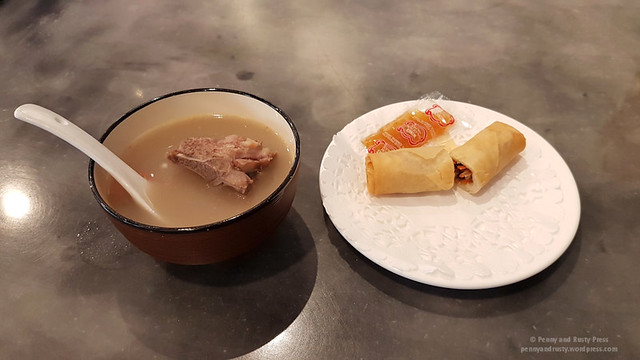 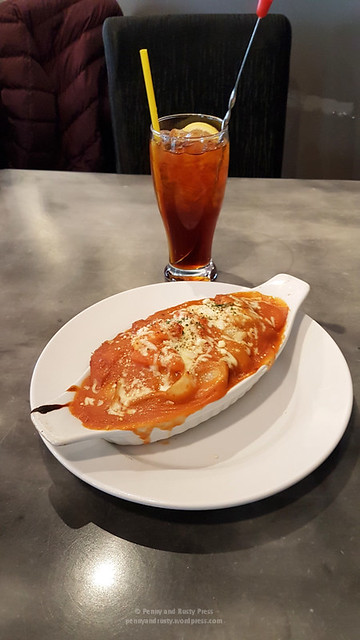 My Baked Pork Chop on Rice ($11.95 + $1.00 for the cold lemon tea) came out on a boat-shaped bakeware vessel drenched in tomato sauce and cheese. Underneath, the rice and pork were fairly dry and needed to be mixed with the sauce. This is the kind of westernized dish that you find in many HK and Taiwanese style cafes. Not the best but okay. 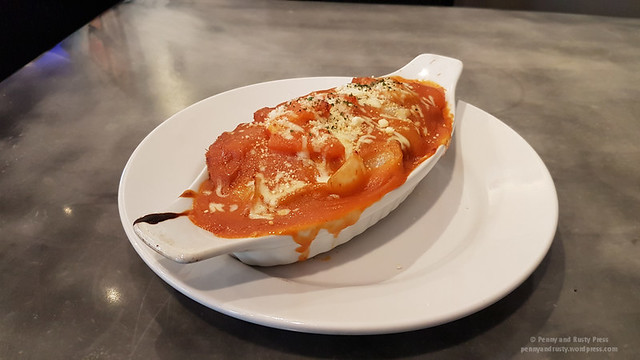 I decided to give this place another try because they do have a large menu here. On my visit the next week, I ordered the Red Curry Beef Brisket on Rice ($11.95 + $1.00 for my cold lemon tea). As this was on their special lunch menu, it also included the same complimentary soup and spring roll that I received last time. 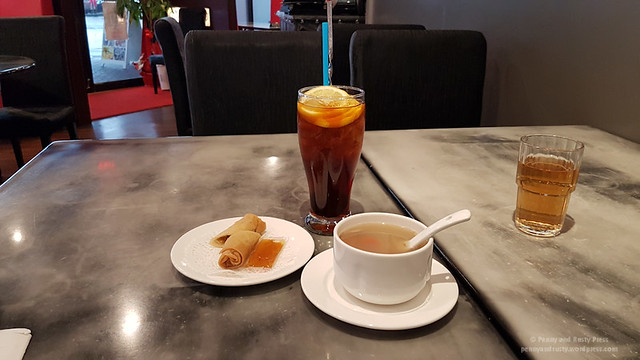 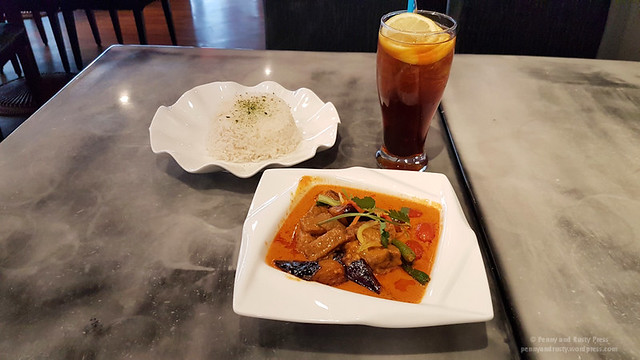 This was actually pretty good and included green beans, eggplant, whole lychees (x2), tomatoes, and tender chunks of beef. If you’re looking for authentic Thai cuisine, this probably wouldn’t do the job given the lack of spice and the one-noted flavour. 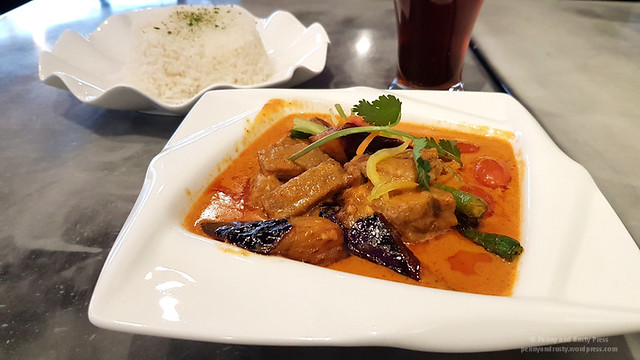 For my third visit, I again wanted to try something different to see I could find any highnotes from their menu. Steering clear of their special lunch menu, my eyes were drawn to their BBQ Eel with Egg Stone Rice ($13.95). Served in a heated stone bowl, the rice on the bottom formed a nice crispy char that’s expected from a dolsot bibimbap. 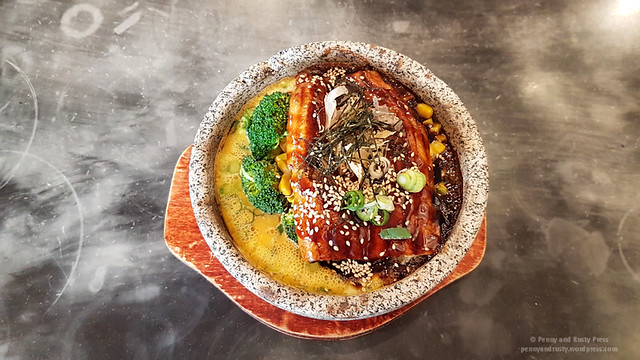 This dish was definitely creamy and topped with bonito flakes, green onions, and nori. Underneath the fairly reasonable sized piece of unagi was corn and broccoli and the bowl was split between unagi sauce on one side of the bowl and egg on the other side. I have to say that this was one of the better dishes that I’ve tried here. 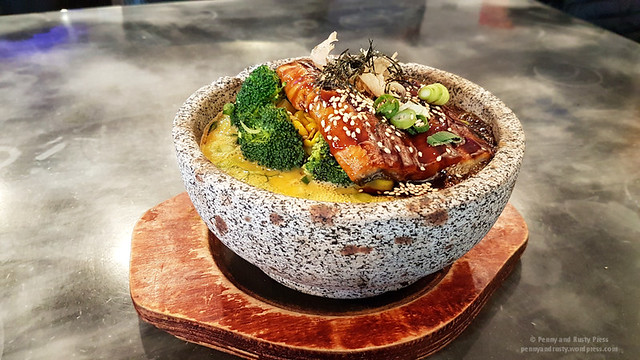 I came back a couple of weeks later because I wanted to try some of their other dishes and ordered the Pork Cutlet with Spicy Mango Sauce ($12.95 lunch special + $1 for cold lemon tea). As this was on their lunch special menu, it came with a bowl of soup and crisp spring roll. Interestingly, the dish also came with a side of potato salad which was surprisingly good. The mango sauce was far from spicy but it was sweet and a bit thin. I found that the pork cutlet was fried up with a crisp exterior but the meat itself was quite dry and a bit hard. Not the best pork cutlet I’ve had. 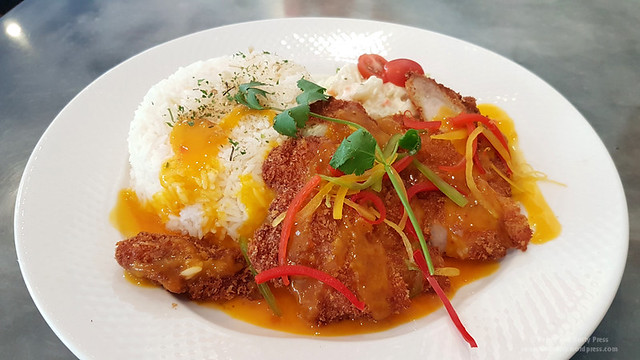 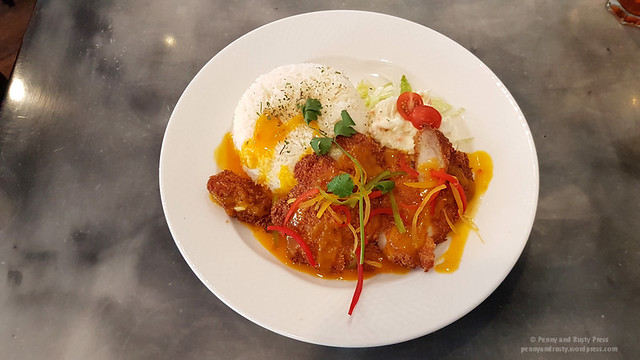 Overall, I’d say the food here is as expected for an asian fusion restaurant. You’re not going to find a lot of great dishes here but you should be able to find some dishes that you don’t mind. In that sense, this would probably make a good choice if you’re dining with friends that all want to have something different. Service is also as expected for an asian fusion restaurant and, although they say they accept credit, they prefer cash or debit.