Hyack Sushi: All Hype or All That?

Anyone who has spent any time around New Westminster will probably be very familiar with the word “Hyack”. Originating from the Chinook jargon for quick, fast, or hurry up, the term has been adopted by various New Westminster area groups such as the 1861 volunteer fire department, the “Hyack Company #1”, the “Hyack Band” that performed during the May Day celebrations, and the popular annual “Hyack Festival”.

After seeing some delicious looking sushi offerings from this newest restaurant on social media, I decided to see if the hype was really all that. This restaurant is located on 8th Street, about a block away from the New West skytrain station. The interior is relatively large for a sushi restaurant and looked to have been recently renovated. The thing that I immediately noticed was the lack of natural light inside (nary a window in sight save for the front entrance). 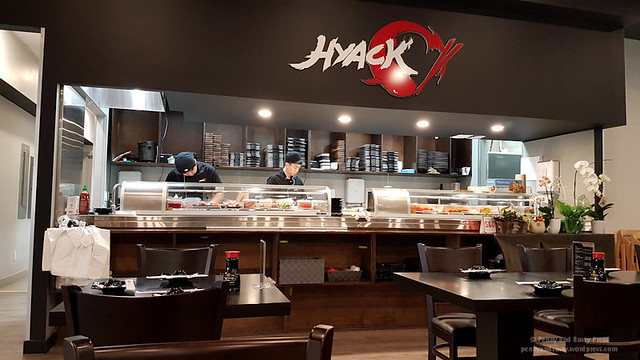 I decided to try some of their aburi nigiri (since those looked the most appealing) as well as some sashimi since I had a craving for fresh fish after recently returning from our trip to Japan. First out of the block was the Half Toro Sashimi ($9.45). It was a bit expensive for half an order but I do admit that the toro slices were on the larger size. It was probably a bad idea to try toro sashimi after recently having the amazing fatty tuna from the Kuromon Ichiba Market in Osaka. It didn’t compare at all… But that’s probably an unfair comparison. What I will say is that the toro sashimi was served a bit too cold and it was not as buttery as you would expect from toro. That being said, it was fairly good but probably not worth the price compared with other toro in Vancouver. 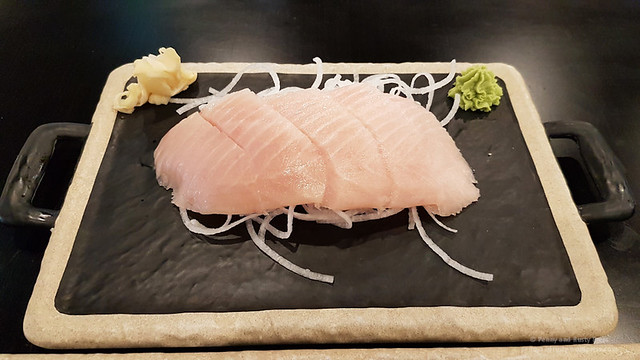 When my aburi nigiri arrived, I just thought back to those pics that I saw on social media and thought that there was no way that these were the same items. In reality, I’m sure that the dark interior of the restaurant had something to do with how these appeared (rather dull, pale, and underwhelming). I ordered the Salmon Bomb ($3.50), Aburi Hamachi ($3.00), Aburi Hotategai ($2.50), Aburi Toro ($2.75), Aburi Salmon ($2.25), and the Aburi Tai ($1.75). 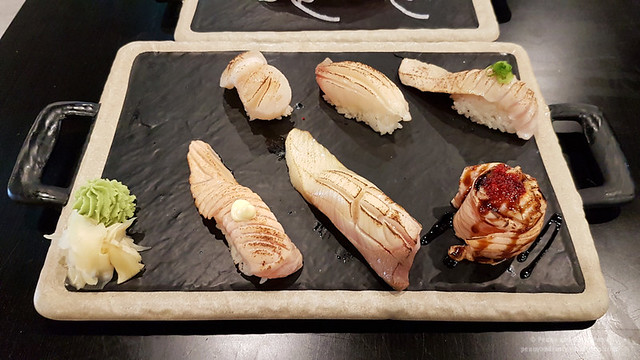 The aburi nigiri was rather basic and not very buttery or saucy. You’d expect the sashimi to have a bit of caramelization from the torching but that was decidedly missing. That being said, the salmon bomb was pretty good and probably the best of the bunch. The yellowtail and the salmon were also the better pieces of the bunch whereas the scallop, tuna, and snapper were just a bit meh. 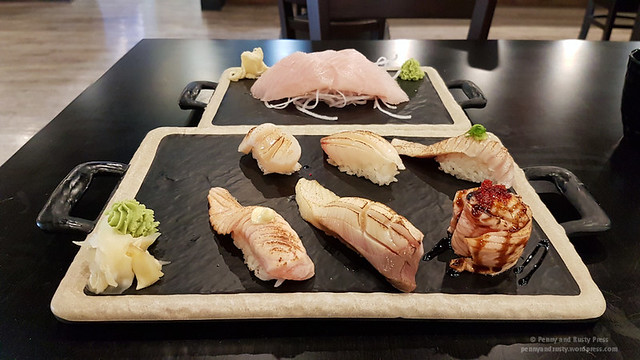 It was fairly dead during my first visit back in early December and it was a bit distracting seeing the waiter just hovering around doing nothing while I was eating. Overall, I didn’t see anything overly compelling during my first visit. I’ll probably give them another chance with a future visit to try some of their other items.

Well, a new year has arrived and I’ve made my first revisit to this restaurant. I’m happy to say that things have improved a bit… specifically, it looks like they’ve turned the lights on (well, at least during this visit). There’s still not a lot of natural light in here but it’s better than my first visit.

This time around, I went with mostly non-aburi nigiri sushi… except for the Sushi Bomb ($3.50). As with my last visit, the Sushi Bomb (a little ball of rice surrounded with aburi salmon sashimi and topped with chopped scallop and tobiko) was the best of the bunch. It reminds me of some of the off-menu items that you can get at Victoria Sushi. 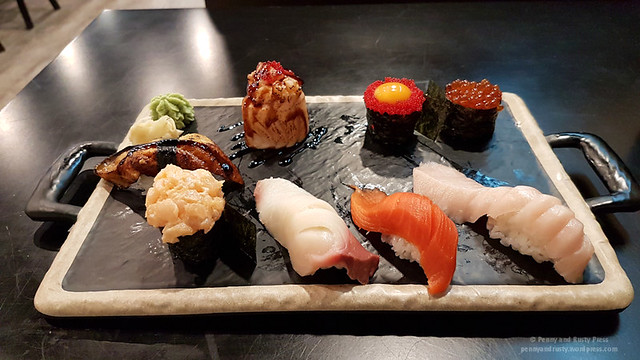 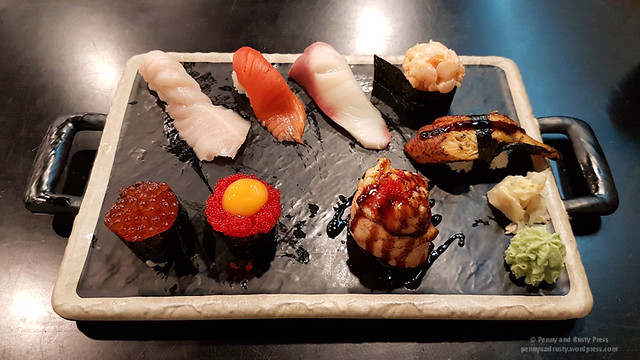 The unagi (freshwater eel) was very good as it turned out both buttery and meaty. Both of the tobiko and ikura had that “popping” sensation that you get with eggs. While the salmon was firm yet buttery, the hamachi (or yellowtail) had a stronger flavour, which is to be expected. 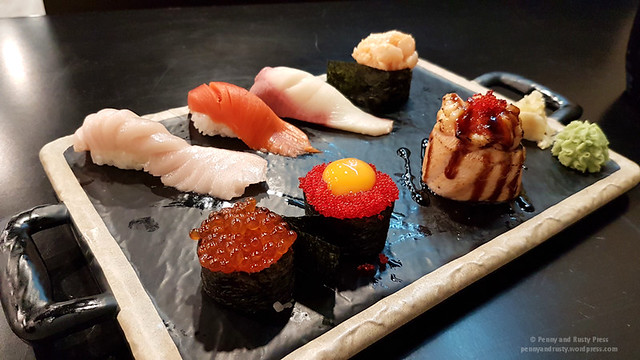 I have to say that my second visit was much better than my first visit both in terms of food taste and ambiance. I’m probably going to have to come back for another revisit to try some of their other dishes.

After a failed visit to a different sushi joint, I found myself at Hyack Sushi again. One of the things I like about this place is that they have a parking lot (a small one albeit) so I don’t have to be nickled and dimed by the street parking meters.

Wanting to try more of their menu items, I ordered their Chicken Karaage ($6.95) which was the highlight of this meal. Although there were a few pieces of cartilage, the deep-fried chicken thigh pieces were superbly moist on the inside while having a thin and crispy shell. They accompany the chicken with a slightly spicy mayo sauce for dipping. 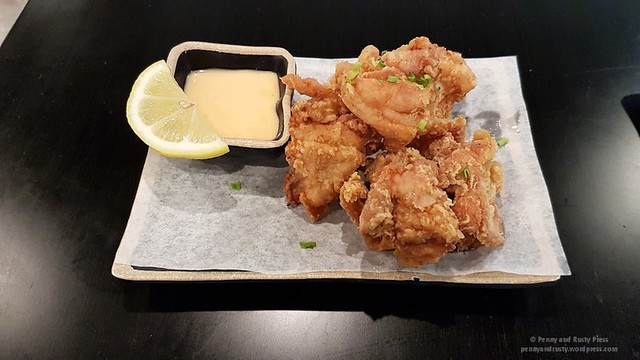 I think I’ve made it a regular thing… every time I come here, I wind up ordering a Sushi Bomb. 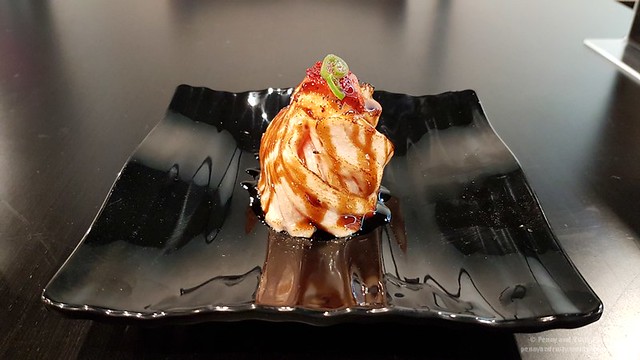 For the rest of my meal, I decided on trying their Salmon Oshi ($12.50). Visually, it looks quite interesting with the ikura topping and the mix of sauces drizzled over top. 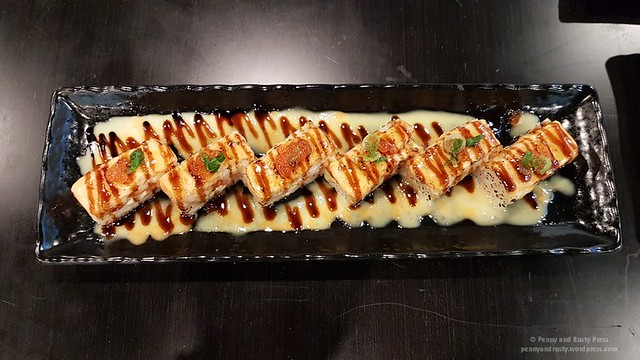 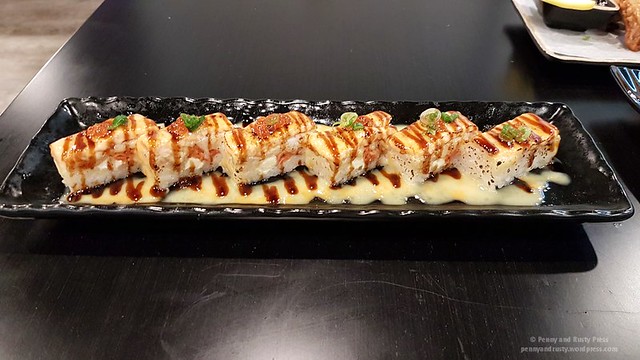 However, I felt like they went a bit overboard on the sauciness of this item and it wound up overpowering the whole dish. Instead of relying on the subtle flavour of the salmon, all I could taste was the sauce. On the inside of the oshi sushi was something creamy (I’m guessing cream cheese) which really made each bite a bit too overwhelming. If you like your oshi sushi creamy and saucy, this might be a good item for you. Personally, I felt it was a bit overkill. 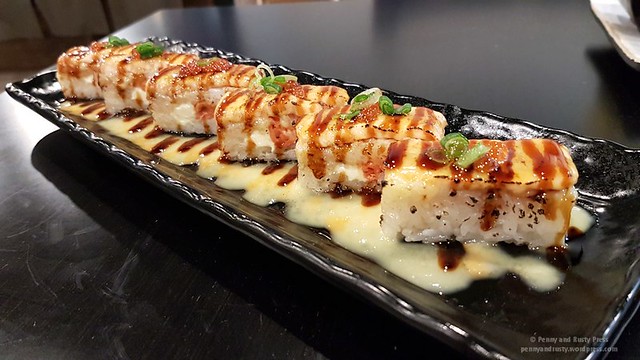 Still undecided, I figured I should give them another try. This time around, I ordered the Deep Fried Poached Egg ($2.50) and the Spicy Mentai Yakiudon ($9.95). 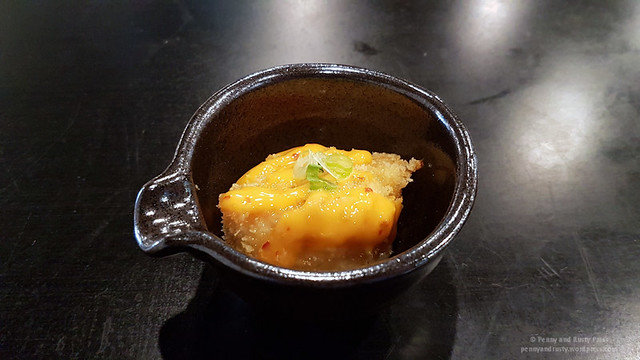 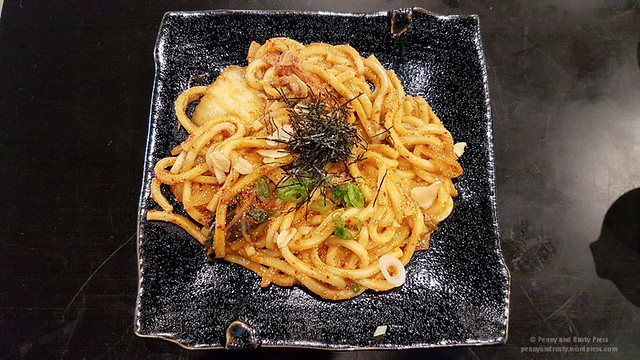 The egg turned out pretty good with a soft yolk surrounded by the crunchy exterior. It might have been overkill, but I broke open my poached egg on top of my noodles (which were already coated with a fair amount of roe). The udon noodles were toothsome with a nice chew to the bite and a mildly spicy sauce. As with the other dishes at Hyack, the yakiudon was a bit overly saucy for my liking. 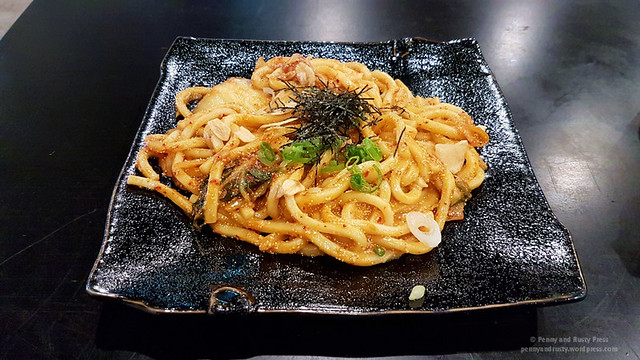 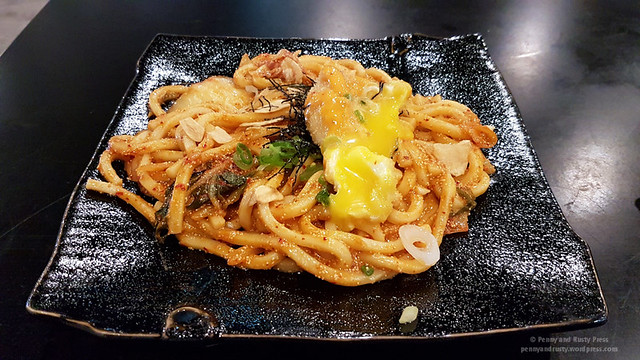 At the end of the day, there’s some pretty good dishes here but others require refinement.