When I first saw the pictures of banana ice cream served up by a food truck called Banán, I knew that I wanted to try them out. However, with only a short amount of time in paradise, we never found the time to make it out to visit. As luck would have it, Banán has since opened up a location right in the heart of Waikiki, just steps away from the beach.

This particular location is actually located along the narrow beach access between The Cheesecake Factory and the Outrigger Waikiki Beach Resort. If you’re walking along the north side of Kalakaua, just look for the beach access that has a long row of surfboards leading to the beach.

Their menu consists of dairy-free banana soft serve made from locally sourced bananas and enhanced with a variety of fresh flavours. We got the Riss Moore Cup ($7) which is made with an Acaí-Banana Banán base and topped with fresh papaya, pineapple, strawberries, crunchy granola, puffed quinoa, shaved coconut, and drizzled with honey. 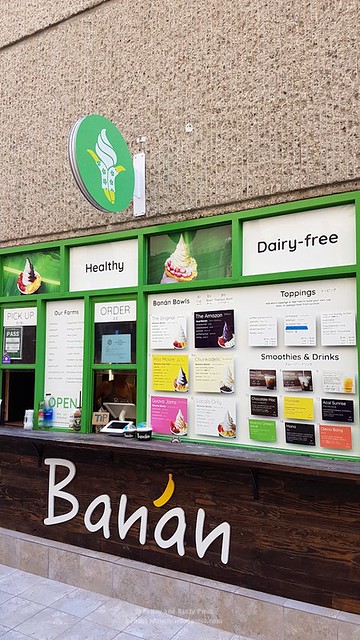 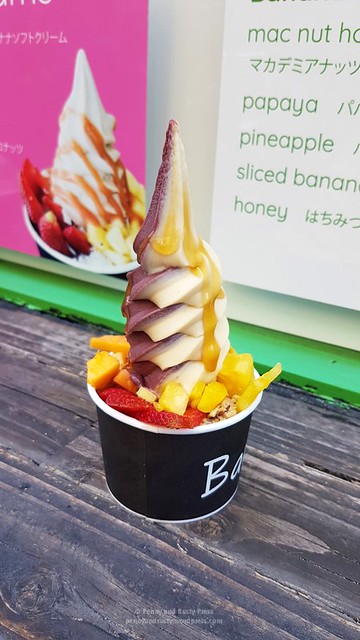 It’s a very impressive-looking soft serve treat and the toppings were spot on. The only problem that I found is that banana soft serve is exactly how it sounds. Now, I don’t mind bananas… but if you’ve ever had a smoothie that was made with too many bananas you’ll probably agree that too much bananas isn’t always a good thing. For my personal tastes, it was a bit too much bananas… but if you happen to really like bananas, then go for it! I would probably love it if they could make this into a pineapple soft serve (similar to dole whip) but then they’d probably have to change their name.