Ramen Raijin is the latest entry to the Zakkushi Group of Restaurants. For those of you that haven’t heard of Zakkushi, check out our post on Zakkushi on Main for some seriously delicious izakaya food. Located in the former Sushi Bella spot on Kingsway, near Royal Oak, Ramen Raijin focuses mainly on ramen and is named after the Japanese Shinto god of lightning and thunder.

On my first visit here in December, they were decidedly busy (always a good sign). I picked the Tsukemen ($13.50) which is a type of ramen dish where the noodles are served on the side instead of in the soup. With tsukemen, you dip your noodles in the soup before you slurp them up. Because of this, the soup/dipping sauce is generally thicker and has more flavour than you would find in a regular bowl of ramen. 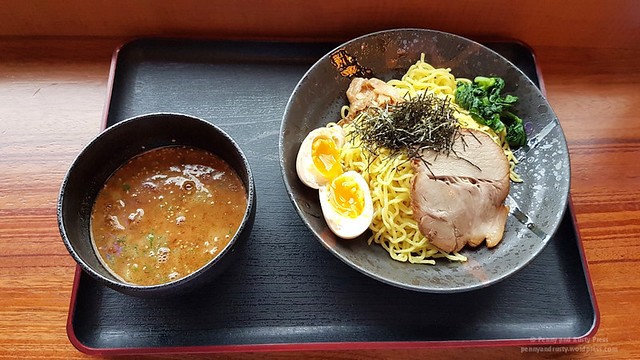 The tsukemen includes a rather generous serving of noodles along with some bamboo shoots, a couple of pieces of veggies, a seasoned egg, some nori, and one slice of tender pork chashu. I loved how the egg yolk was perfectly creamy on the inside. I only wish it came with another slice of chashu. That being said, you can add toppings to your dish so next time I’ll probably add another slice of chashu or perhaps their pork belly. 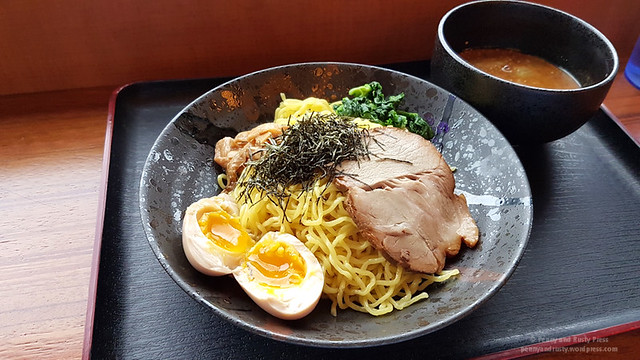 This is definitely a dish that you have to be careful eating if you’re wearing a white shirt. While the fish-flavoured soy sauce soup wasn’t overly thick (like the tsukemen that we had in Tokyo), it was still pretty good and had small chunks of pork in it. Although you’re not normally supposed to drink the tsukemen soup undiluted, I felt that I could easily slurp up every last drop. 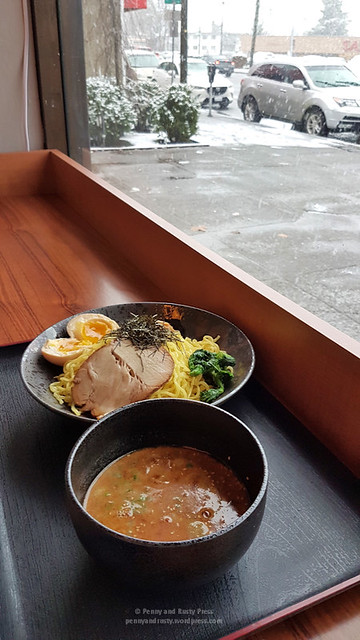 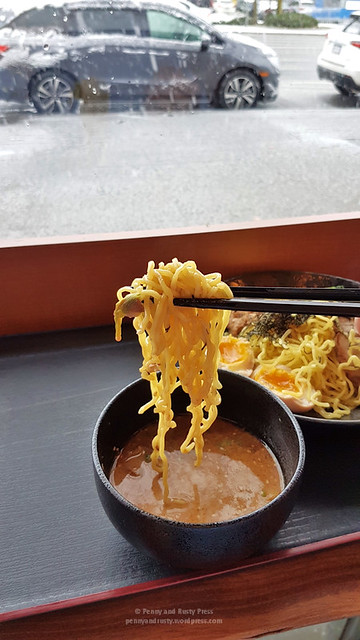 While the amount of ramen that you get in this dish is pretty good, like most proper ramen shops, you can always add extra noodles (for $1) if you’re really hungry. The thing to note about tsukemen is that the noodles are generally served cold (while the soup is served hot) so don’t be surprised to find that the ramen noodles arrives a bit clumpy… this really isn’t a problem since the noodles will warm up in the soup. 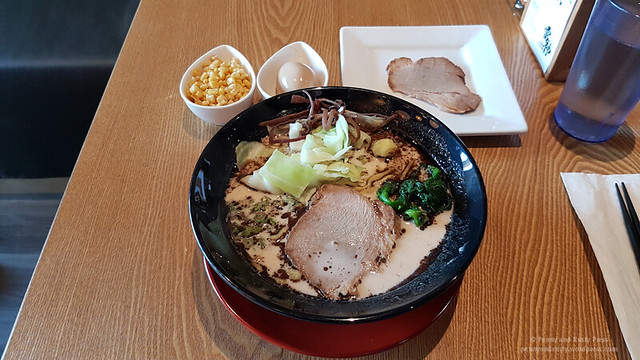 On one of my revisits, I decided to try their Shio Tonkotsu Ramen with egg ($14.75) which is served with one slice of pork (so I added an extra slice of pork shoulder for $1.75 as well as corn for $1). While they use Japanese salt as a base, it’s not overly salty. They pair the broth with essence of bonito, Japanese seaweed, shiitake mushrooms, and shrimp to produce a dark, milky broth that’s creamy and well-bodied. The pork shoulder is suitably tender and the egg has a nice creamy yolk. I have to say that this is a really good bowl of noodles and I could spend all day drinking this broth. 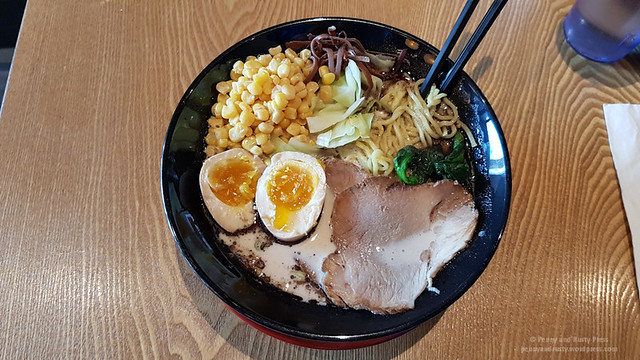 Thinking that I’ve already had the best of their menu already, I decided to try their Spicy Tonkotsu Ramen with egg ($14.25 plus $1.75 for an extra slice of pork shoulder chashu) since they say that it’s their #1 best seller. This bowl of ramen comes with a spicy, creamy broth with corn, cabbage, sprouts, and green onions. The egg yolk in this bowl was really good and the rich and angry broth warms up your throat and belly. I can definitely see why this is their best seller. 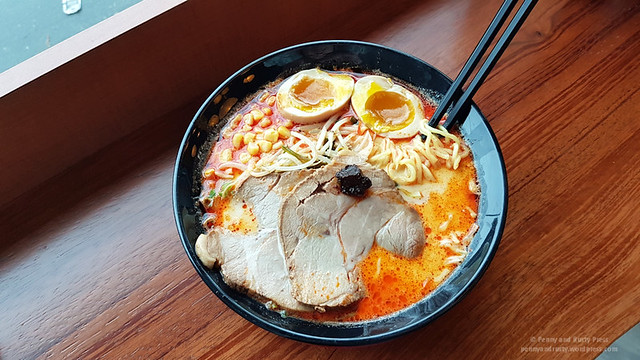 I figured that I’d have to try their Chef’s Recommended dish… the Tokyo Shoyu Ramen with egg ($13.25). I love menus descriptions that are accurate. This bowl of ramen isn’t the thick, milky broth that you get with tonkotsu. Instead, they make it with a lean chicken broth with a strong shoyu flavour. While not being too salty, the clear, soy-flavoured broth was true to the description. They include one slice of seaweed, one tender slice of pork, a slice of narutomaki (fish paste with a pink spiral that resembles the Naruto whirlpool), green onions, and menma. 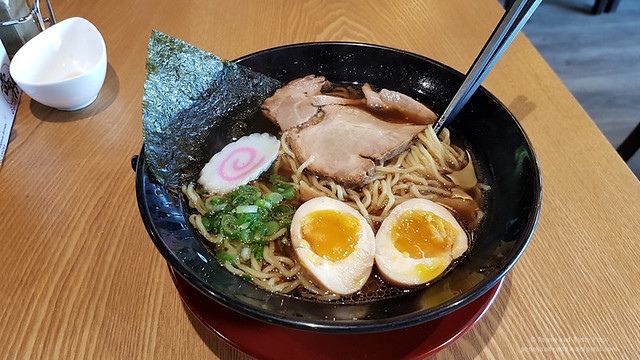 I rounded this meal off with a small order of Pork Gyoza ($4.80). The tender filling was encased in a thin skin. It was good but I would have liked to see just a tad more crispness to the skin. 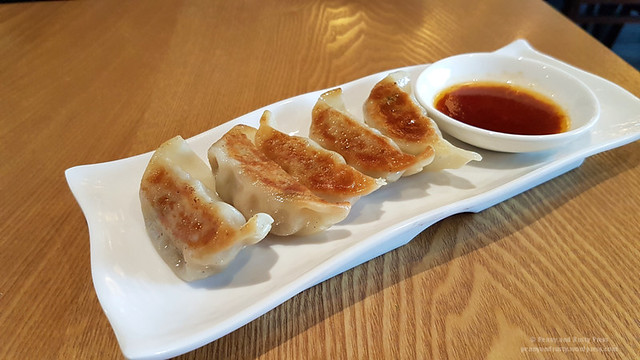 Ramen Raijin is a solid addition to the ramen scene in Burnaby.