Occasionally, I get asked how I got involved in writing a food blog. My answer is usually the same… I’m getting old. But more to the point, I like to try different places when I eat out and sometimes I can’t remember whether or not I’ve eaten somewhere before and whether or not the food was good (because I’m getting old). So it’s mildly ironic that I wound up at Abdul’s BBQ at Crystal Mall.

I say that it’s ironic because I’ve been here before back in 2012 (over 5 years ago!) and wrote a blog post about it which almost repeats my recent experience to a T. In my prior review, I wasn’t that thrilled with Abdul’s for specific reasons. If I had read my prior review, I probably would have went elsewhere… oh well, live and learn. 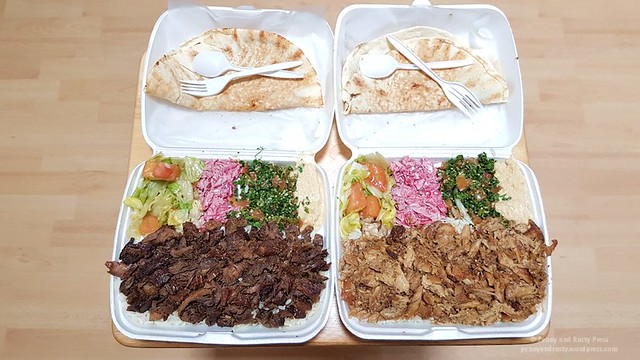 I’m going to cut to the point of this review… Abdul’s BBQ is located outside of Crystal Mall (facing Kingsway). The prices are somewhat expensive for this type of establishment. Back in 2012, the prices were around $12+ and I had thought it was expensive then. Skip ahead to 2018 and the items I ordered were around $15+ (again, kind of expensive when compared to other places that serve fast food shawarma).

Although they have 3 vertical spits with rotating meats, they don’t shave the meat off the spits when you order it. Instead, the meat’s already been cut off and placed in separate metal containers (assuming it’s because in Canada you have to apply a second cooking method after shaving the meat off the spits). The meat is also shredded up into very small pieces (which I don’t particularly like). 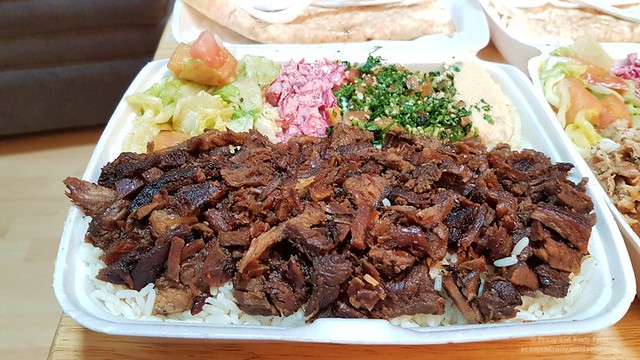 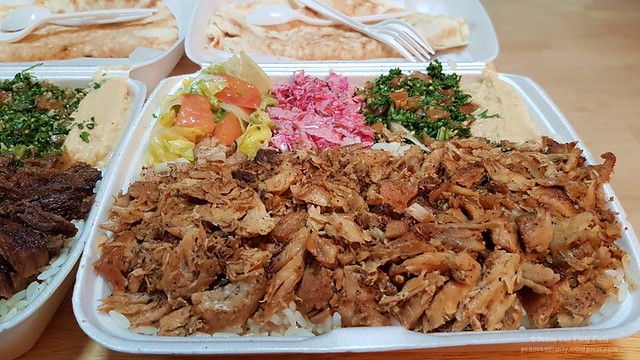 One thing that I’ll say for them is that the platters that we ordered (the chicken shawarma and top round beef shawarma) were extremely heavy. There is a fairly healthy serving of shredded meat and rice in here which should fill up even the hungriest diners. The problem that I have with Abdul’s is their meat is so dry and bland. While the tabbouleh and hummus is pretty good, that alone couldn’t really save these dry platters. If you look inside the pita bread that comes with your meal, they smear on some sauce which is nice (and a bit messy).

Personally, I’ve had much better shawarma. Hopefully, the next time I feel in the mood to try Abdul’s, I’ll re-read my blog post and head somewhere else.