Okay, I’m going to do my best to give this place a fair review. After all, it seems unfair to compare the sushi from a shopping mall in New Westminster with the sushi that we had in Japan. So here goes… Woomi Sushi is located inside Royal Square Mall (next to IT Char Burger). I mention IT Char mainly because it is a gem of a find inside this mall and I had hoped Woomi Sushi would provide similar unexpected results. 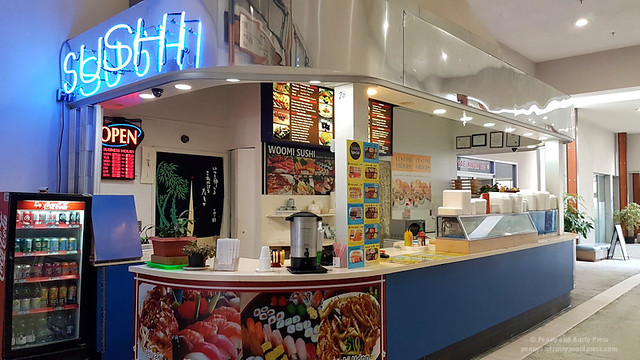 I wound up ordering their Special Bento Box E ($11.50) which included 2 pieces of tuna sashimi, 2 pieces of salmon sashimi, 2 pieces of yam tempura, chicken teriyaki, 4 pieces of California roll, salad and miso soup. I showed up just before noon on a weekday and it wasn’t busy at all (not unexpected given how hidden this stall is).

The salad was crisp, the miso soup was hot, and the California roll was typical of sushi from a shopping mall… nothing outstanding here. Of everything, the yam tempura was probably the best as it had a light and crisp batter and seemed fresh. Meanwhile, the sashimi was the troubling part of this dish and you can kind of see it in how the sashimi appeared in the picture… it seemed to be still partially frozen. I even waited until the end of my meal to give the sashimi a chance to warm up a bit but I could still feel the slightly icy crunch from the inside of the flesh. 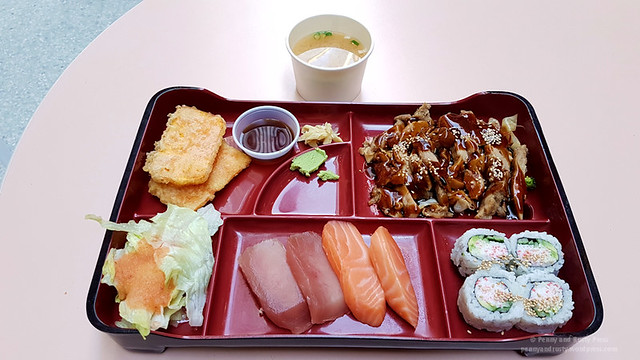 As for the chicken teriyaki, it tasted precooked and reheated and was served on a light bed of cabbage and limp broccoli. It’s a shame because the people seemed nice and I really wanted to like this place more than I did.