Does anyone ever wonder how the small Chinese-Canadian cafes started up? I mean, a place that serves both hamburgers and sweet and sour pork? Many moons ago, during the early settlement of Canada, Chinese immigrants introduced Chinese-style dishes that were refined for the tastes of their western contemporaries. In many small towns across Canada, the Chinese cafe was the first and only restaurant available as the unique recipes were a novelty for many. However, to attract more customers, these Chinese restaurants would also add western dishes to appeal to their customers.

Okay, that’s enough of a history lesson… this post is about Young’s Cafe – one such aforementioned Chinese-Canadian cafes which is located in New Westminster on the former grounds of the Purple Lotus. It doesn’t look like there has been much updates to the interior of this cafe since the last time I stepped foot into the Purple Lotus 4 years ago. The owner had mentioned that Purple Lotus moved downtown but had to eventually shut down due to the rent prices. 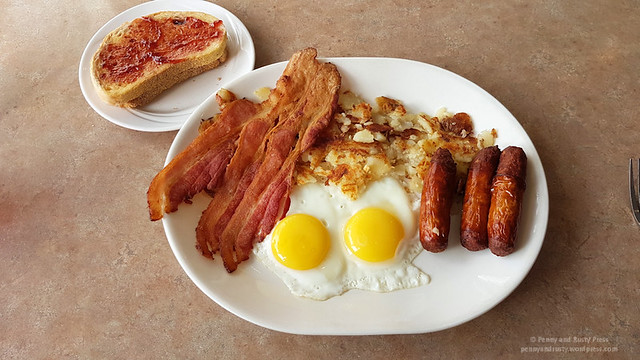 The place has a bit of a diner feel with tall ceilings, tired-looking chairs, and a western breakfast menu that’s served alongside chow mein and egg foo young. As I was in the mood for breakfast, I opted for Young’s Big Breakfast ($8.95) which included 3 plump sausages, 3 strips of thin and crispy bacon, thinly shaved potato hash, and your choice of toast and two eggs prepared to your liking. 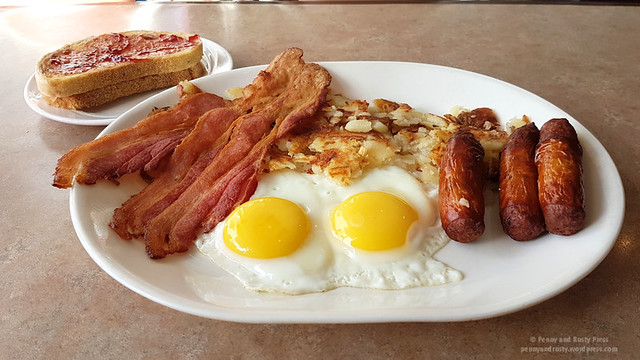 To me, there’s nothing better than a good piece of toasted, buttered rye to go with your breakfast and this did not disappoint. The fried eggs had a nice runny yolk and I have to admit that most of the dish was pretty good. I thought that the potato hash only had a bit of char and wished that there was more crispness to it.

While they didn’t seem too busy during my visit, it seemed like they had their share of regular patrons.