Indochine Kitchen + Bar recently opened up a new location on Fraser St. in South Vancouver. For those of you who haven’t tried their original location on Broadway and Ontario St, Indochine is a modern take on the food that made Phnom Penh famous. Instead of the tired decor and the family atmosphere that you’d see at Phnom Penh, however, Indochine has a sleek and stylized decor that seems to target a younger crowd.

We came here for lunch in early February (and nearly wiped out on their slippery tile floors). I know they’re trying to go with a more blingy design here but… seriously? Slippery tile in a wet city like Vancouver? Preventable.com

Anyhoo… we had plenty of time to admire their decor (including the many tvs and glass-enclosed semi-private rooms in the back of the restaurant) since service was quite slow. We noticed one of the waitresses showed up late. It was about this time that the dining area started to fill with a spicy smoke emanating from the kitchen. They really need to get a better fan in the kitchen because they had to prop open the front door to get some of the smoke out of the restaurant (keep in mind that it was early February and it was mighty cold outside).

I’m not sure if it was because they were still in their soft opening, but they had a much smaller menu than their Broadway location. Fortunately, they had the main items that we were looking for. First off was the Indochine Garlic Butter Chicken Wings ($12). The wings were okay – not on par with Phnom Penh or even their sister location but not bad. 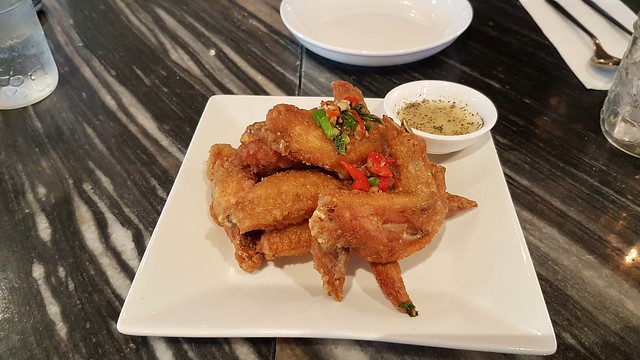 The Butter Beef Carpaccio ($15.75) was a large dish and had an ample amount of thinly shaved beef with a tart soy vinaigrette, mound of cilantro, and crispy garlic chips. 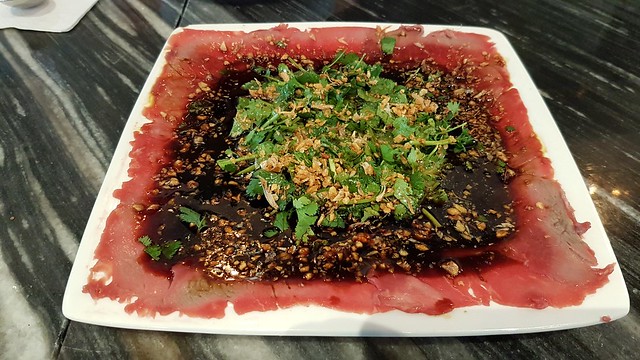 Last up was the Beef Luc Lac ($13.75 + $1 for the fried egg) served with tomato rice. Also known as “shaking beef” due to how you shake the wok to cook the cubes of beef, this was my favourite item here. There was a good serving of plump and tender pieces of beef and the fried egg had a nice runny yolk with crispy edges to the egg white. The tomato rice wasn’t really tomatoey though. 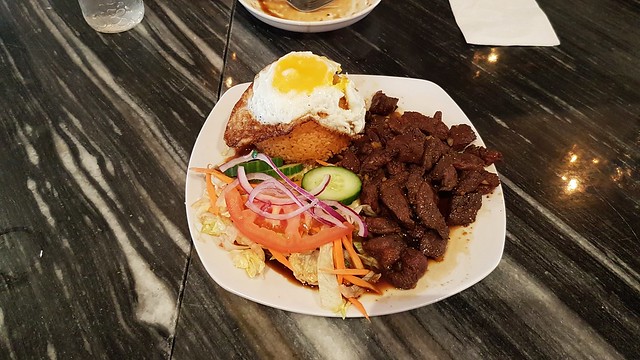 They definitely need to work on some things here in terms of service and ambiance. As expected in a bar-like atmosphere, the music is loud which makes it difficult to carry on a conversation.