Ramen Hachi is one of the many new ramen joints that seem to be popping up all over the Lower Mainland. This cute noodle joint is located on Carnarvon Street in New Westminster, behind the New West Skytrain station.

I dropped by in February to try them out. The menu is a bit limited and I was hoping for some tsukemen but it seems like they took that off of their menu. They only opened at the end of December last year so they may be still tweaking the menu. Instead, I ordered the Kumamoto Ramen ($9.98) which is thought to have originated in Kurume, Fukuoka Prefecture and then introduced to Kumamoto city where it developed into its own unique ramen. Kumamoto ramen is known for the use of black garlic oil and fried garlic in the broth. Ramen Hachi’s version uses a lighter chicken-based broth with thin noodles (unlike the standard thick noodles that usually comes with Kumamoto-style ramen) and also includes 2 pieces of braised pork, black fungus, green onions, black garlic oil, fried garlic, and bean sprouts. You can definitely taste the garlicky flavour in the broth and the pork was adequately tender. If you’re looking for a thick and creamy tonokotsu broth, this isn’t it and the thin noodles lacked a noticeable chew. 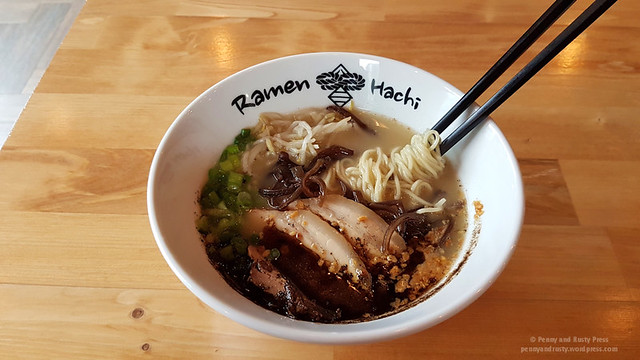 The waitress mush have misunderstood me when I ordered because she also brought me out an order of Chicken Karaage ($5.70)… not that I mind. I was actually thinking of ordering it and I was kind of glad when it came out. The boneless pieces of chicken had a thin and light crispness on the outside and were tender and moist inside. 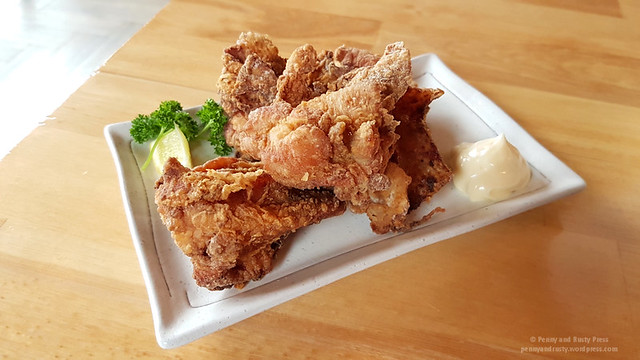 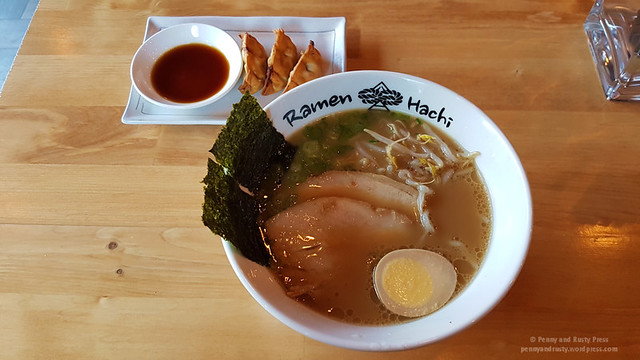 This bowl of ramen had a thicker noodle and a richer broth compared to my last bowl. Again, the pork was quite tender and they include green onions, bean sprouts, and seaweed in the bowl. I’m not so much of a fan of the hard-boiled egg as the yolk was fully cooked. It’s perhaps not as milky as the broth at Ramen Raijin but it was still pretty good. 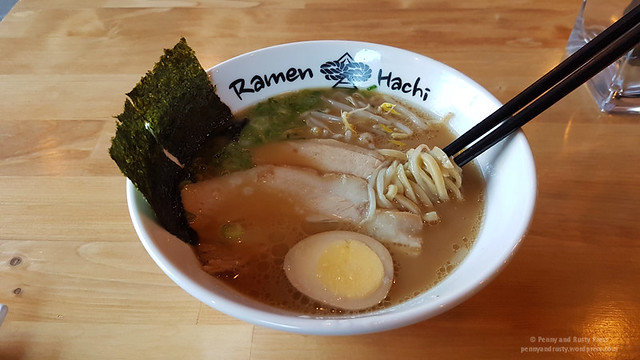 The deep-fried gyoza had a crisp shell (age-gyoza) which encased the pork filling and provided a noticeable crunch to the bite. 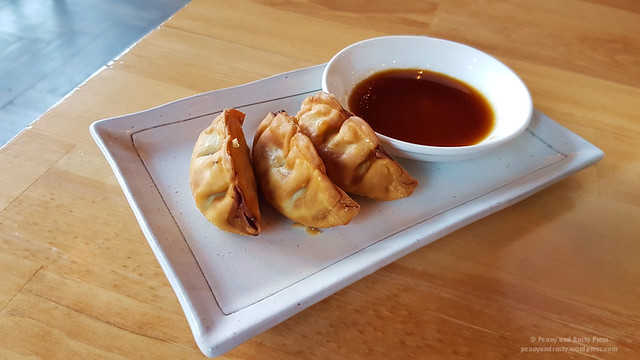 Service seems pretty friendly and they seem to make the effort. However, I’d like it if they expanded their ramen menu offering.