Dragon View Chinese Cuisine is located on the second floor of Continental Shopping Centre in Richmond and has a pleasant looking interior with interesting chandeliers that, to me, resembled the round leaves of a money tree (lunaria annua). There’s also a large floral mural on one wall made up of tiny metallic and glass tiles. 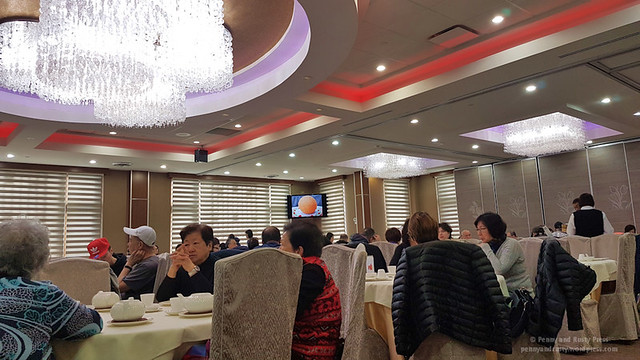 Knowing that dim sum restaurants fill up quickly on the weekends, we arrived shortly after they opened and managed to get seated right away. The food, however, took quite a while to come out (probably about 40 minutes). 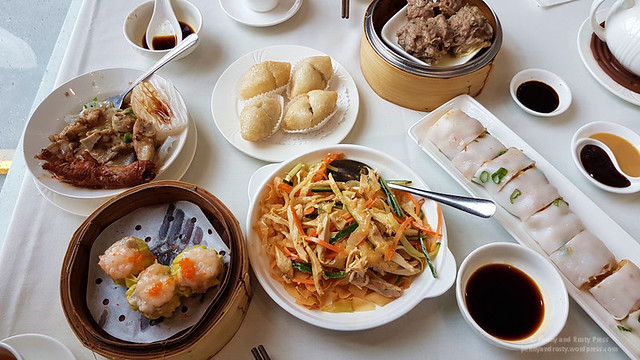 Our first dish, the Steamed Country Style Rice Rolls with Chicken Feet and Spareribs ($7.98) had layers of clear, wavy rice rolls. I was actually expecting more than one chicken feet in this dish and I think they forgot to give us soy sauce initially. Once it was appropriately “sauced up”, I was actually quite pleased with the texture of these rice rolls. 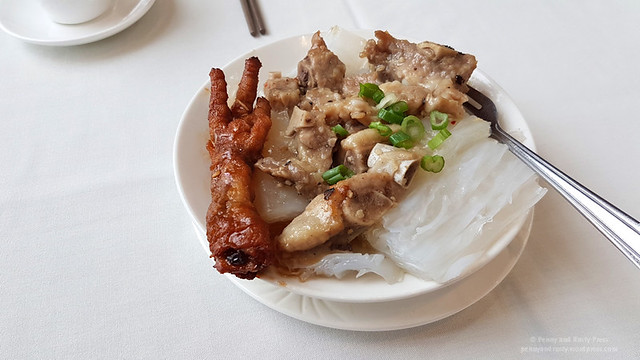 Next up was the Siu Mai ($6.30) which were topped with a plump shrimp and tobiko. I’ve never seen it served this way before and thought it was quite novel but didn’t necessarily add to how it tasted. 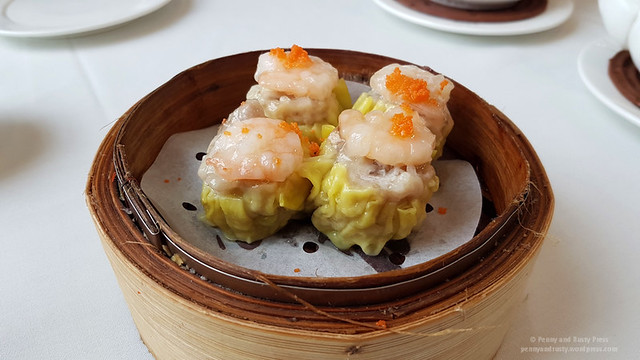 These football-shaped dumplings are Haam Sui Gok ($5.98), a type of deep-fried dumpling with a meat filling encased in a crispy outer layer with a pleasant chewy texture from the glutinous rice dough. 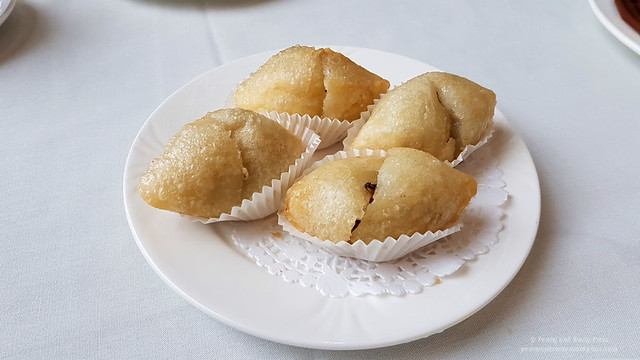 The Chef’s Special Shredded Chicken ($10.80) or sow see gai is a popular cold dish and is known for the crunchiness of the ingredients which contrasts with the tender and savory chicken. 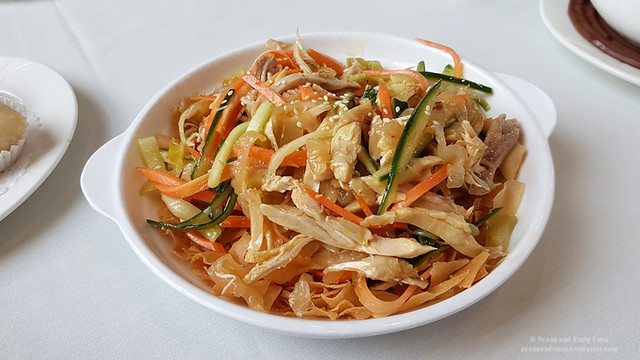 The Steamed Beef Balls ($5.98) are one of our go-to dishes at dim sum and are usually served on top of tofu skin with a Worcestershire dipping sauce. 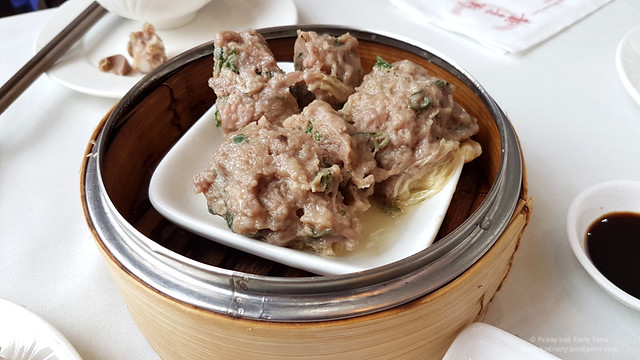 Last up for us was the Chinese Donut Rice Roll ($6.88). Inside the velvet-textured rice roll was a crispy Chinese donut as well as pork floss. 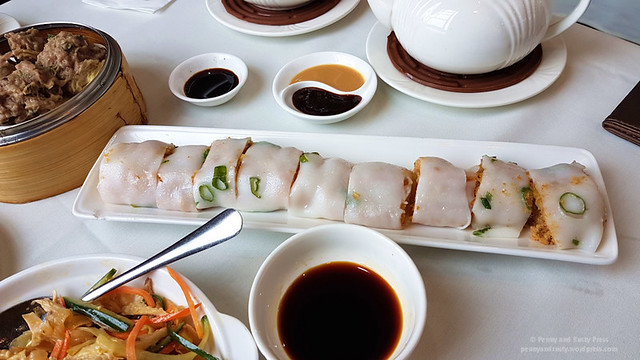 Despite the long wait for our food, we did quite enjoy the food here so we wound up coming back for a revisit 6 weeks later. Having ordered the Chinese donut rice roll previously, we wanted to try something different and picked the Steamed Beef Rice Roll ($6.88) which turned out pretty good. The food also turned out to come out quicker on our second visit. 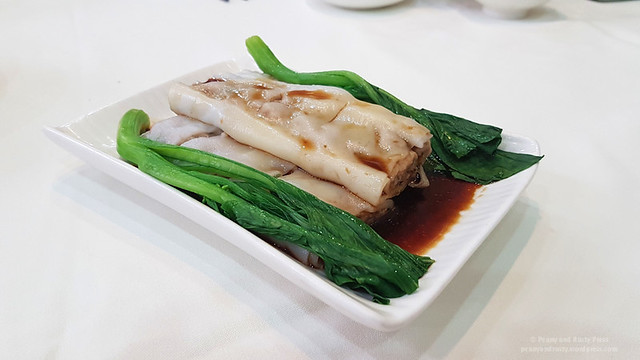 Similarly, the Har Gow ($6.38) was a solid dish with large and plump shrimp inside the moderately thick wrapper. 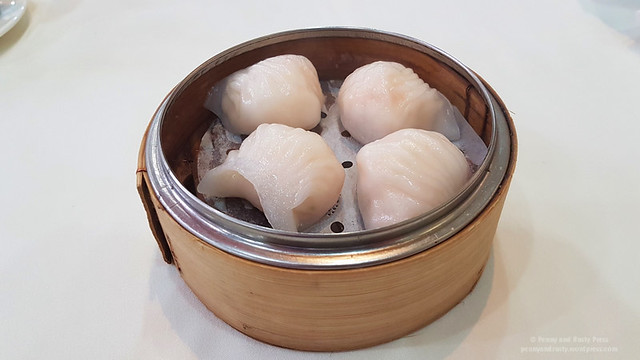 The Deep Fried Squid ($9.19) had a nice golden hue from the batter and was coated with a mixture of diced garlic and hot peppers. A couple of pieces were a bit too chewy but the rest turned out pretty good. 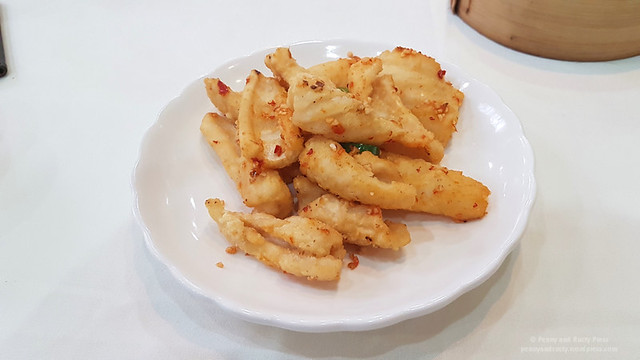 I found that the Steamed Spareribs with Garlic ($5.98) was one of their weaker dishes as there were quite a bit of fatty and inedible pieces in the dish. 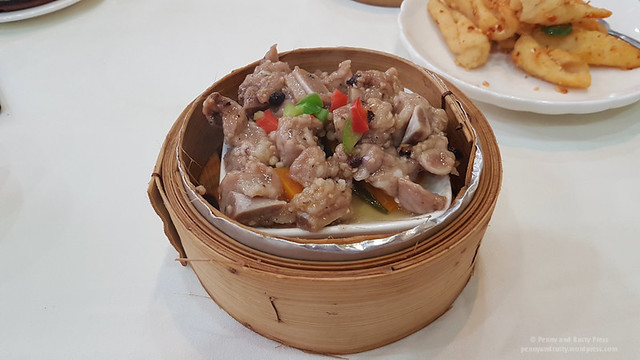 While the dishes were a bit on the pricier side, most of the food items were pretty good and I wouldn’t hesitate to come back (just make sure to go early before it gets busy).