Bells and Whistles: All Day Breakfast

In today’s terminology, “Bells and Whistles” usually refers to something that has a number of additional attractive (not necessarily useful) features. Nobody really knows the true origin of the phrase, but some believe that it harks back to a time long ago when bells and whistles were used to draw attention to something (such as at fairgrounds). In any case, the Bells and Whistles that I’m referring to today is the newish gastropub offering from Gooseneck Hospitality (the same group that brought us Wildebeest, Lucky Taco, and Bufala).

I’m not much of a drinker but that’s not the real reason why I visited. No… I heard that there was a super breakfast sandwich here that’s available all day and, if you’ve been reading this blog long enough, you probably know how I feel about breakfast.

When I arrived to Bells and Whistles, I was surprised at how large, bright, and airy this place was. The bar area, located on the right when you first walk inside, is separated from a more casual dining area to the left. Both sides have large projection tvs on the wall and there’s plenty of natural light that comes in from the large windows. If you peer further past the dining area, you can see a separate section which houses a couple of carnival arcade games. 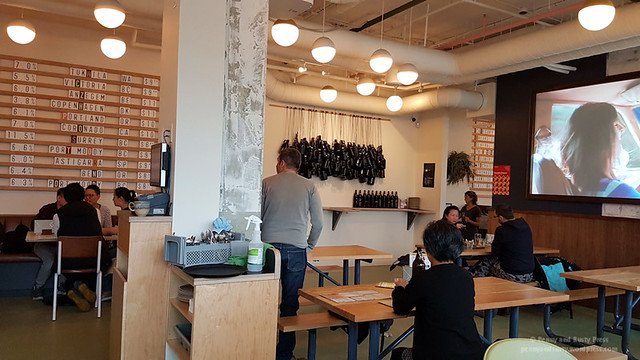 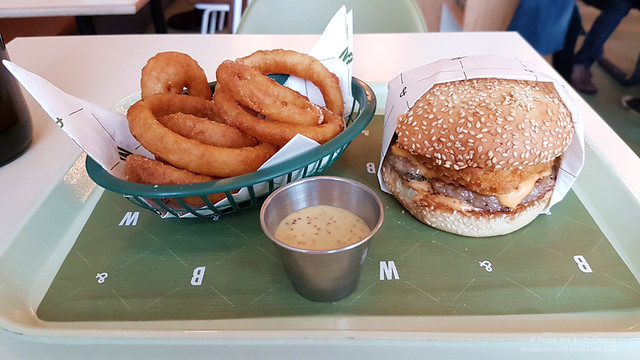 I ordered the All Day Breakfast ($15.50) which includes a maple sausage pork patty, american cheese, hash browns, a fried egg, and their own special sauce. I also upgraded from fries to onion rings ($2) and paired it with Dickie’s Ginger Beer ($4). The reason why I wanted to try this is because it reminded me of Triple O’s Breakfast Club and my own Super Terrific Happy Big Breakfast McMuffin creation. 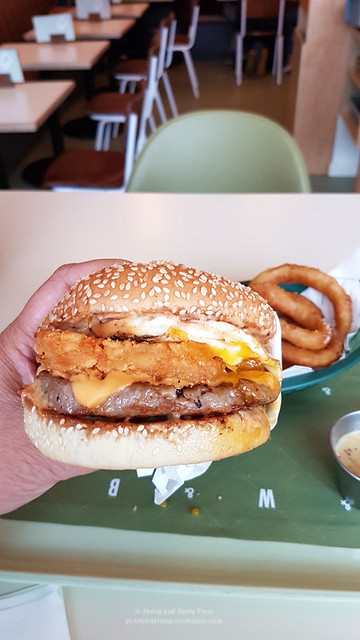 This breakfast sandwich is not for the faint of heart… it’s fairly large and quite filling. The maple sausage patty is juicy and complements the crispiness of the hash browns. And that egg with the drippy yolk? Dang! I was actually surprised that their bun, while not overly thick, held up well to the juicy contents.

The onion rings were well formed and reminded me of old school onion rings (not like the processed onion-like rings you get at Burger King). The battered rings were pretty good and were served with a honey mustard dipping sauce. Personally, I prefer breaded onion rings but I’m not complaining here.

Service was friendly and this seemed like a fun and vibrant place with plenty of food options that you wouldn’t expect to find at a typical pub. As expected, it can get a bit loud in here from the din of patrons.

We returned a couple of weeks later to try some of their other menu items and arrived around the brunch-hour. Unfortunately, it was busy during this visit so we had to wait about 45 minutes for our meals (the waiter did tell us in advance about the delay but we decided to stay anyways since most brunch places would have been busy too). 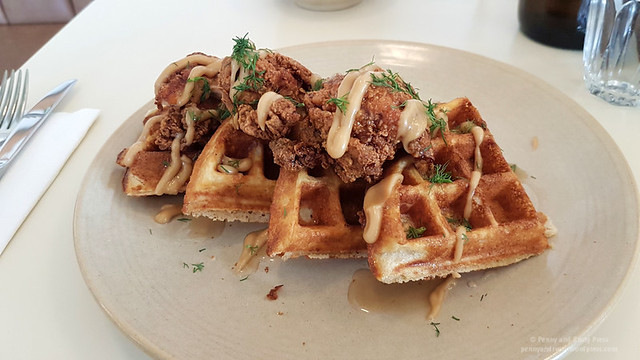 The Chicken and Waffles ($16) is on their brunch menu and comes with crispy buttermilk fried chicken and oat waffles that are drizzled with chili yogurt and maple syrup. I’m not sure if it was because the food was good or because I was so hungry… but I wound up scarfing this down really quick. 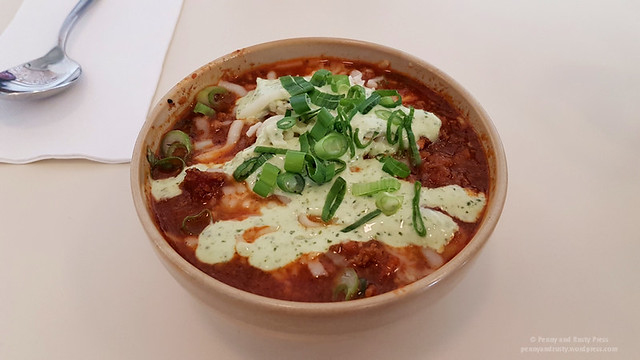 The Chili ($10) is a fairly small bowl but chock full of chunky beef brisket, chuck, and short rib, roasted corn, black beans, and bacon. It’s topped off with cilantro crema and green onions and turned out to be a fairly tasty and thick version of chili (but lacked a spicy kick).

Overall, a fairly fun environment with some standout, artery-clogging options.