Recently, I noticed that a new restaurant had taken over the former Koh Thai location at the corner of E. Columbia and Braid. The interior layout looks pretty much unchanged with the partially open kitchen which allows diners to hear and smell their food being prepared.

On my first visit back in April, I decided to try their Bibimbap ($13.95) to see how it compares to others I’ve had at other Korean restaurants. Before it arrived to my table, however, the exceptionally friendly waitress brought out some banchan (kimchi, broccoli, and bean sprouts) and a bowl of clear, oily soup. 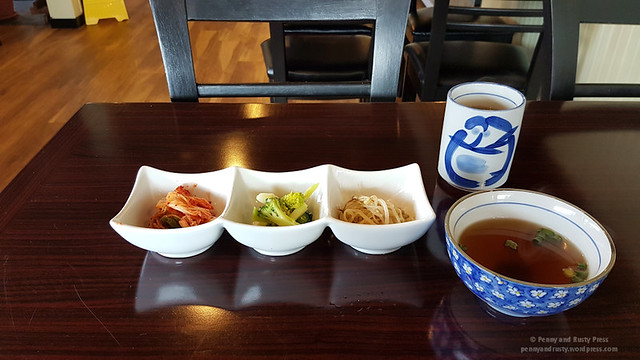 The bibimbap included beef, thinly cut carrots and cucumbers, onions, spinach, soybeans, shiitake mushrooms and topped with a fried egg. While I normally enjoy a fried egg with a runny yolk, I feel like they under-cooked the egg white here. 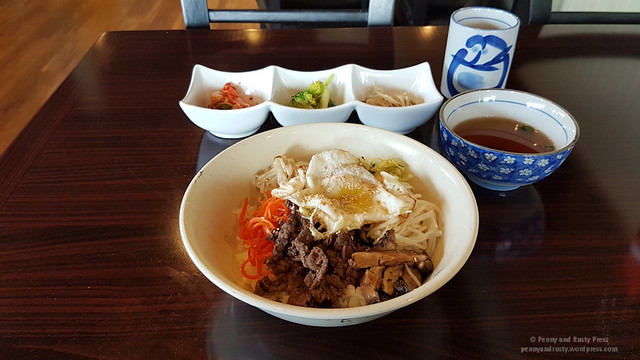 Overall, it’s not a bad dish but I prefer dolsot bibimbap which creates a crispy layer of rice on the bottom of the stone bowl. 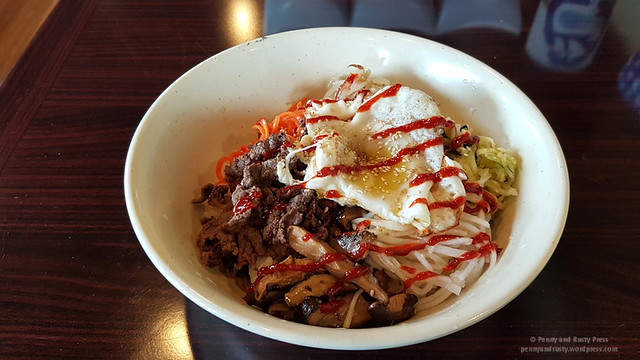 While my waitress was quite friendly, it seemed like she was always quickly running back and forth between the kitchen and the tables. On my next visit, I had a different waitress that was more subdued (but still friendly). 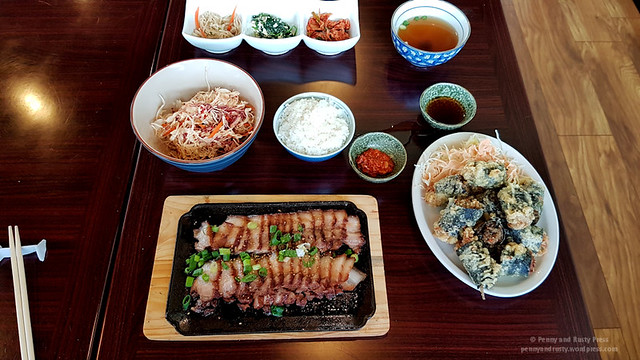 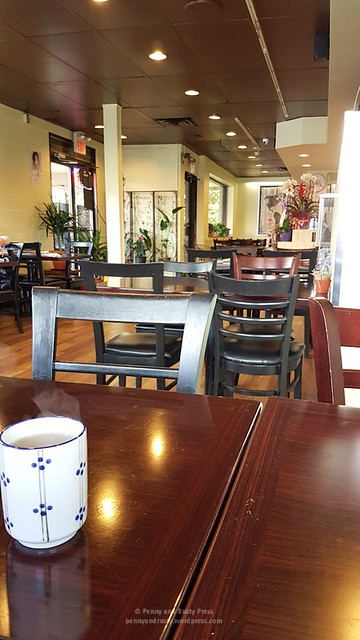 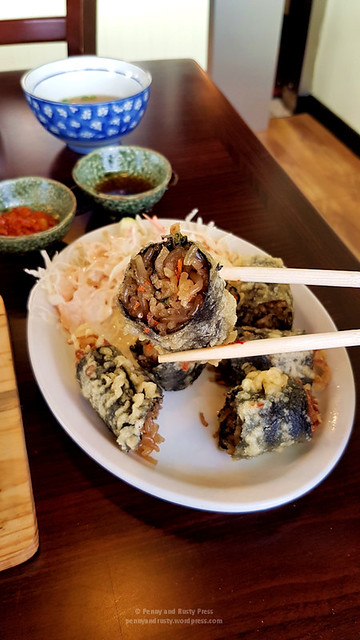 My favourite was the Kim Mari made with sweet potato noodles and veggies wrapped in dried seaweed and deep-fried. It was paired with a dipping sauce and a side of slaw. I really enjoyed the crispy, crunchy texture of the roll mixed with the chewy glass noodles on the inside. 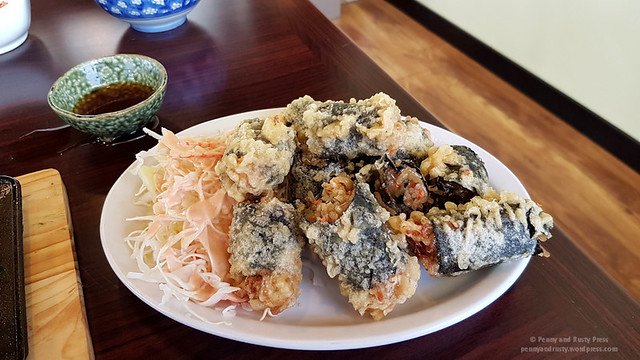 This time, the banchan they brought out was slightly different with spinach replacing the broccoli on my earlier visit. 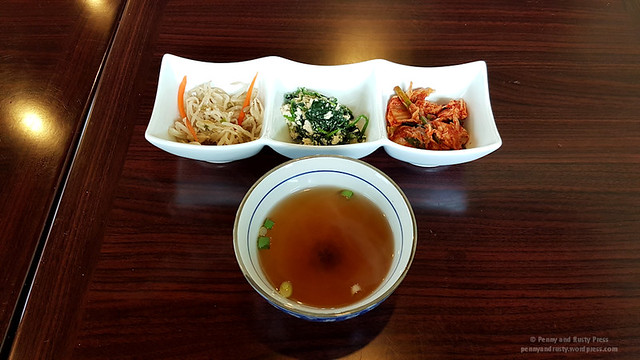 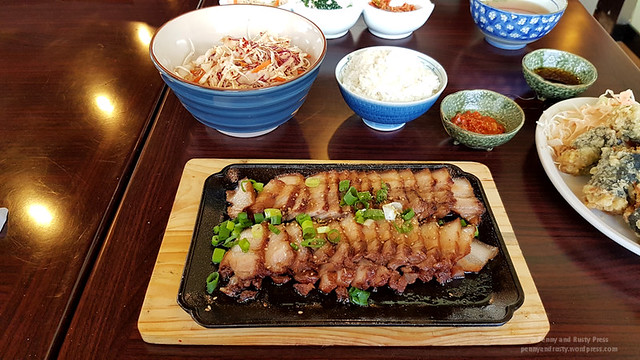 The sliced pork belly was served with a large bowl of sweet and sour cabbage and wound up being a larger serving than I was expecting. I wouldn’t say the pork was the tenderest that I’ve had before but it was okay. 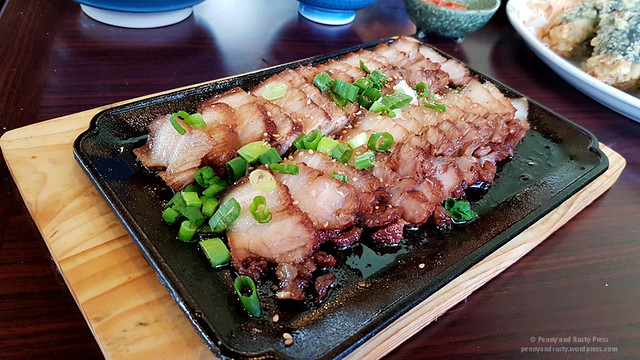 I came back for a revisit almost half a year later and it seems like they have made some menu changes… specifically, they lunch specials where you can pick from a number of entrées to mix-and-match with different fried rice options and starters. I opted for the Spicy Pork Slices lunch special with Shrimp Fried Rice and Korean Pancakes ($13.95). 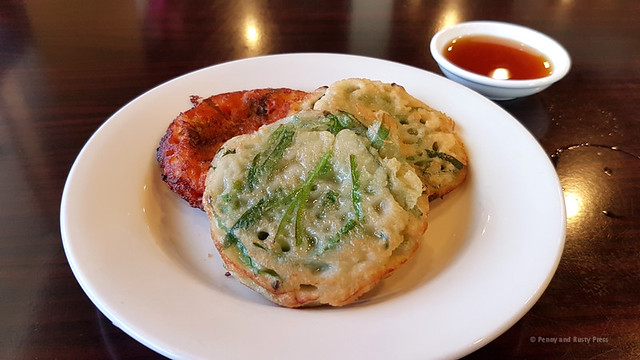 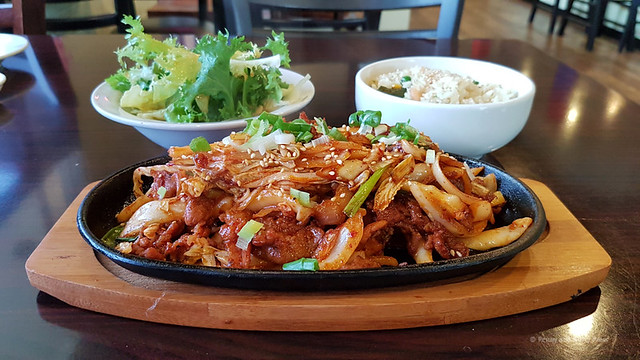 The individual Korean pancakes were crisp on the outside and soft and chewy on the inside. The red one was supposed to be a kimchi version and had a slight kick to it. Meanwhile, the other two tasted very similar and had chives on the inside (think these might have been the potato version). The fried rice was a bit basic and on the dry side while the shrimp tended to be super tiny. However, it did do an adequate job of serving as a vessel to sop of the spicy sauce from the pork slices. Served on a sizzling hot plate, the pork slices were pretty good and were mixed with onions. 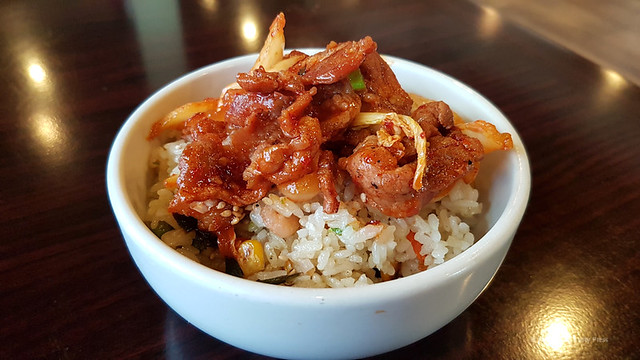 It’d be interesting to see if their menu continues to change.