It wasn’t my plan to visit Ricky’s… but sometimes, things just work out this way. I was originally going to head over to Lido Restaurant to try their famous pineapple buns but found the place to be super busy on the Saturday morning. Not in the mood to wait around or to hunt around for parking, I dejectedly headed over to nearby Ricky’s Country Restaurant (this is now my 2nd failed attempt at visiting Lido).

Ricky’s was fairly busy but their restaurant and parking lot were large so I didn’t have trouble finding either. As I sat down and waited for my Farmhand’s Favourite $13.59) breakfast to arrive, I noticed that the diners here were decidedly non-Chinese given that we were in Richmond (I think I was the only asian person here). I suppose this restaurant appeals to a certain western palate.

There’s nothing really fancy with this restaurant… the interior is a bit tired and the plates appear to stick close to their country-style roots. My breakfast included 2 eggs, 2 strips of maple bacon, 2 sausage links, toast, and I upgraded to their stuffed hash browns ($2.99). 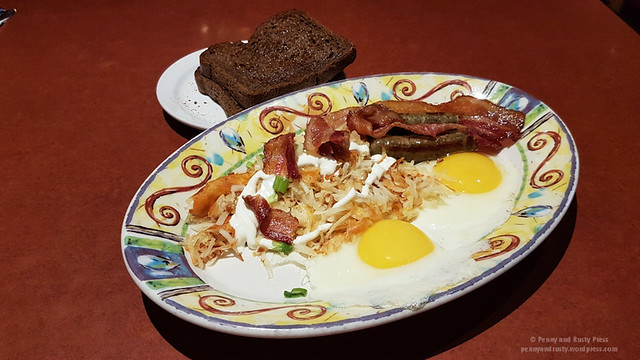 The good: The dark buttered rye appealed to me and the stuffed hash browns with 3 cheese, maple bacon, sour cream, and green onions were pretty good here and had a good amount of fillings (although I wished that the shredded hash browns were a bit more crispy).

The bad: The bacon, while thick, was more hard than crisp while their breakfast sausage were decidedly hard and not very plump or juicy.

The meh: The eggs, while having a nice runny yolk, had a bit of under-cooked egg whites (which is always unappealing).

Service tends to be a bit slow here and they seem to stick to their country roots. If that appeals to you, the food is passable. Note that I tried the stuffed hash browns at another Ricky’s the following day and it wasn’t good at all so things might be just the luck of the draw.