There’s no disagreement, Vancouver has some seriously good ramen joints around town (most of which are located in the downtown core). Ramen Danbo is one such ramen joint (they have 1 location downtown and 1 in Kits) and they are frequently busy.

Like many of the popular ramen spots, everything is fairly minimalistic inside with the focus on efficiently getting people in and out the door as quickly as possible. Eating ramen really isn’t the kind of thing where you linger too long since your noodles would wind up getting cold. Ramen Danbo has a small menu which focuses on traditional Fukuoka-style Kyushu Hakata tonkotsu ramen. Fukuoka is a northern prefecture located on Japan’s Kyushu Island (the most southerly of Japan’s 4 major islands) and where tonkotsu ramen (known as Hakata ramen) originated from.

When I arrived for dinner mid-week in June, there was a small lineup already. You need to sign in on a sheet and indicate your preference of table or counter and whether your whole party is here. I think I had to wait for about 12 minutes before I was ushered to my seat at the counter. From this vantage point, you can see the kitchen and things can get a bit warm due to all of the steam from the boiling water. 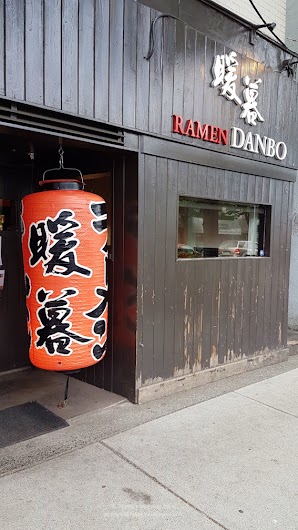 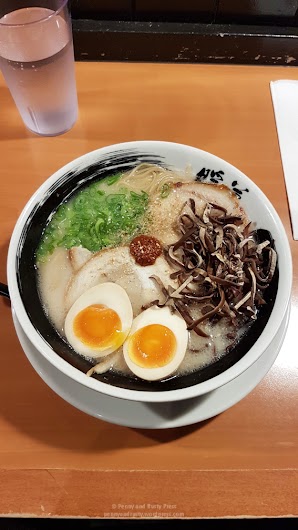 While their menu is limited, you can completely customize your order to your liking. I opted for the Shio Chashu-men ($13.45) which comes with six pieces of thinly sliced chashu (braised pork belly) and added a soft-boiled egg ($1.75) and kikurage ($1.50) sliced cloud ear mushroom. I then specified the classic thin noodles with a firm noodle texture, standard thickness of broth, a rich amount of lard, and a standard karadare (amount of umami spicy sauce). 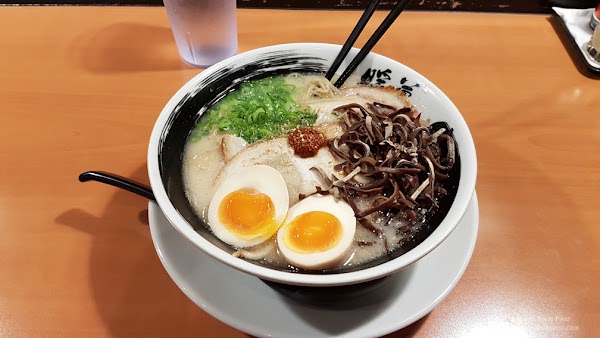 Within no time, I was presented with my order. What I will say for them is that it was prepared exactly to my specifications. The rich and creamy tonkotsu broth was not overly salty (although “shio” means “salt” in Japanese, it’s a fairly mild salt flavour), and the tender pieces of chashu literally fell apart at the slightest touch. The tender egg added to the richness of the broth. If you can resist drinking all of the soup, you can always add an additional order of noodles ($1 for half order or $2 for a full order of extra noodles).

Overall, a really good bowl of noodles here where you can customize to your liking.