Gino’s Restaurant is located in the heart of Sapperton in New Westminster. The interior isn’t much to look at and reminds me of a sports bar that’s seen better times… the furniture seemed a bit wobbly (the backing to my booth kept wavering back and forth so I had to make sure not to lean too hard).

I showed up for lunch on a weekday in June and the place was fairly quiet. The few patrons that were here seemed to be either people that worked in the area or some old timers. I decided to order their Gyro ($11.50) – pronounced “YEEros” which is made from ground beef and lamb thinly sliced and wrapped in a pita with tomatoes, onions, and lettuce and then served with a Greek salad and fries. 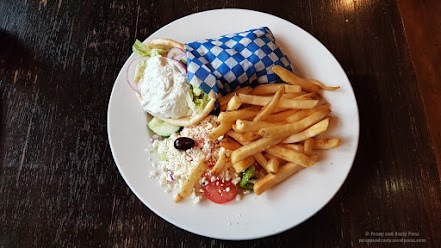 The first thing that I noticed when this platter arrived at my table was the huge glob of tzatziki that was dolloped on the top of the gyro. I tried to pick up the pita wrap but it was quite difficult as it wasn’t wrapped tightly and tended to flop around (perhaps the reason why they gave me a steak knife with the gyro was because I was supposed to knife-and-fork-it). The best part of the gyro was the warm and tender grilled pita wrap… sometimes when I get a donair/gyro, the pita is dry and hard to bite through but this pita wrap was soft and a pleasure to bite through. The filling was a bit skimpy in the meat department but the flavours were alright.

I felt that the fries were just meh and the execution of the gyro could have been better (would you like some gyro with your tzatziki?)