Top Cantonese Cuisine Restaurant is located in a cramped little mini mall on the corner of Kingsway and Earles in Vancouver. When we arrived for dinner on a weekend, we were surprised that it wasn’t overly busy (usually not a good sign for a Chinese restaurant).

Almost upon arrival, our waiter was encouraging us to get their special Winter Melon Soup. If you’re Chinese, you’ve probably had winter melon soup before prepared at home. If not, just imagine a giant watermelon with white flesh on the inside that is fairly bland and tasteless. Usually, the flesh is diced into manageable chunks and the resulting soup is light and mild. 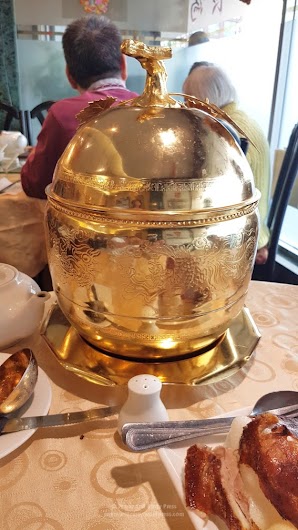 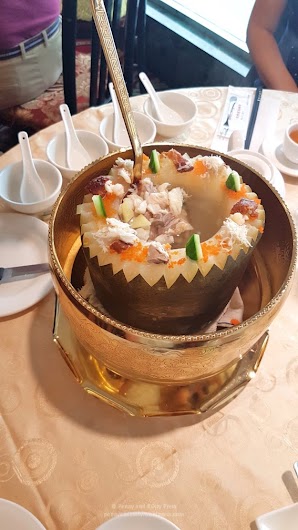 The winter melon soup here is prepared and presented in the way you might see at a Chinese banquet or special dinner. In this case, the soup is simmered with duck, scallop, shrimp, and crab inside the hollowed out melon itself and presented at the table in an elaborate golden-hued metal container. Presentation was on point and the tender winter melon flesh absorbed the flavours of the broth. The waiter will serve this soup for you and will carefully mix up the filling along with scrapings of the inner winter melon flesh before doling it out into your bowl. 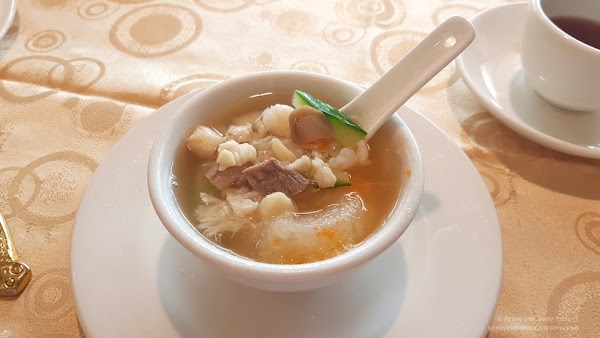 We ordered a bit much for 4 people – that winter melon soup dish is rather large and could count as a vegetable dish by itself. 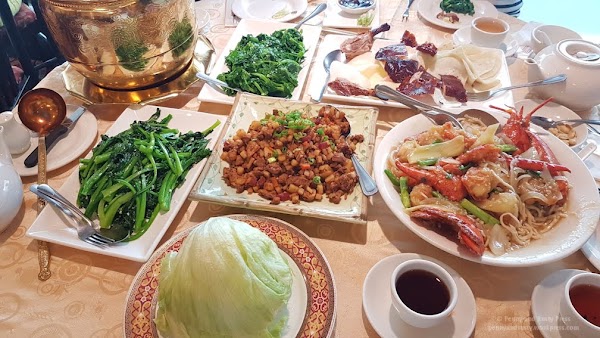 Next up was the Peking Duck. The meaty slices of duck and skin were presented on a layer of crisp shrimp chips. Did you ever notice that there’s always more duck slices than there are wrappers? 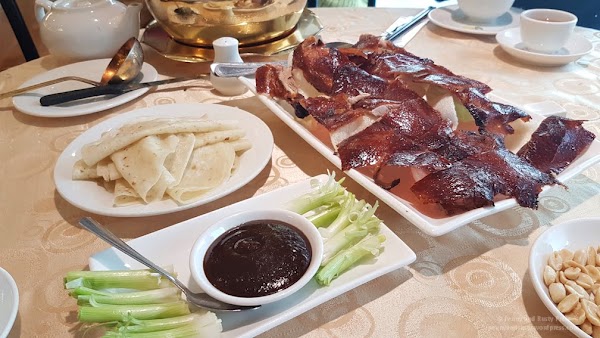 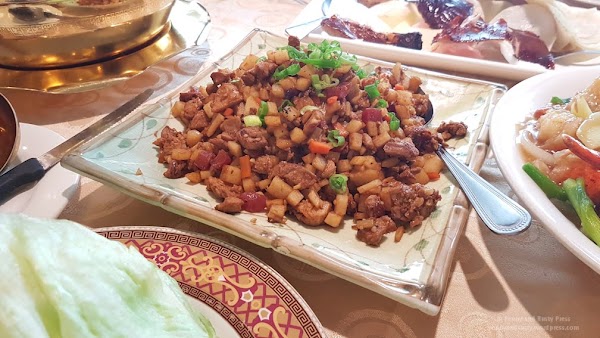 And, of course, no Chinese dinner would be complete without some type of seafood.. in this case, Lobster with Yee Mein Noodles. The lobster was well prepared and stir-fried in a green onion and ginger sauce and there was plenty of yee mein noodles under the 2lb lobster to soak up that sauce. 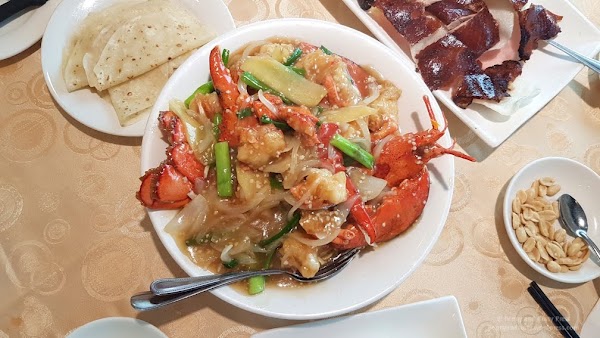 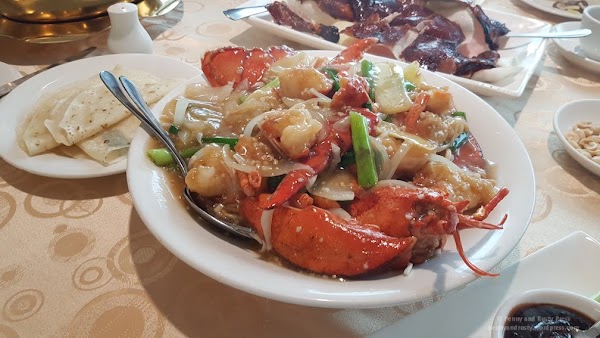 In hindsight, we probably didn’t need to order 2 veggie dishes given the size of the winter melon (our waiter actually tried to talk us out of ordering 2 veggie dishes). The pea tips and choy sum were simply pan-fried with garlic. 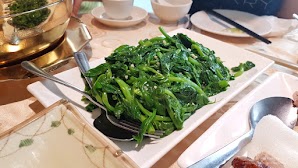 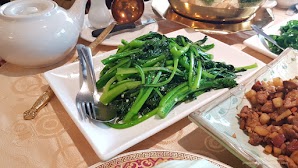 We came back at the end of June for dim sum and the restaurant was decidedly busier. The Deep Fried Taro Dumplings ($5.25) were the first to arrive at the table and had the characteristic fluffy/crispy exterior with a pork filling. 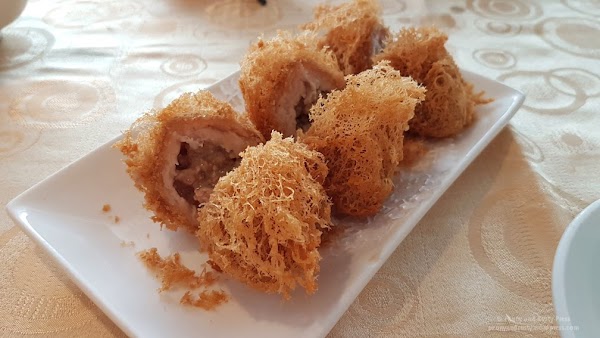 The Steamed Spareribs ($5.95) and the Minced Beef Rice Rolls ($5.95) arrived shortly thereafter. Actually, we were pleasantly surprised that most of our dishes came out rather quickly. 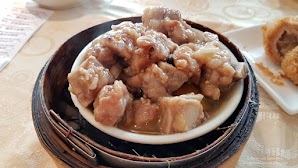 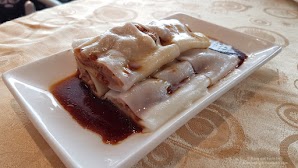 I felt like the Eggplant with Fish/Shrimp Paste ($6.25) was overly fried as the exterior was a bit too crispy and hard. On the other hand, the Prawn and Scallop Dumplings ($5.95) was pretty well executed with a soft and slippery wrapper encasing plump shrimp and topped off with scallop and roe. 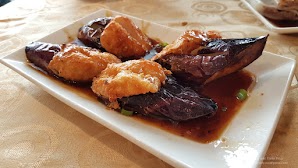 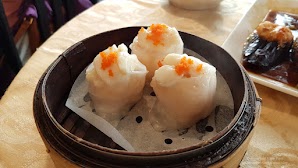 Another miss for me was the Steamed Tripe in Ginger and Green Onion Sauce ($6.25) as I thought it was just a bit too chewy – even for tripe. The final dish to arrive at our table was the best of the bunch… the Egg Tarts ($4.50) were freshly made and served hot with the jiggly egg custard encased by a flaky pastry shell. 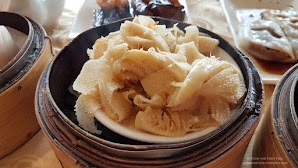 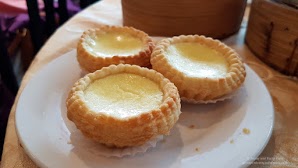 Overall, the food was pretty good here but some of the dim sum items could have been better. Service was also a bit of a miss when it got busier in the restaurant as it was difficult to catch the attention of the waiters.