This past August 15th, 2018 was Pirate Pak Day at White Spot. This is the day that adults can purchase their famous Pirate Paks and White Spot would donate $2 to the Zajac Ranch for Children… a worthy cause that I’ve raised money for in the past.

I had decided to head over to the White Spot at North Road and Lougheed Hwy to get my Pirate Pak fix and it was a good thing that I showed up early because this location filled up quickly by noon. I’m not sure how much of that is due to regular business and how much might be attributed to Pirate Pak Day. Glancing over their special limited menu, and not really feeling in the mood for a hamburger, I noticed that you could order a couple of non-hamburger items so I picked the White Spot Club ($15.99).

When my meal arrived, I was a bit confused because I thought it was going to be served in their cardboard pirate ship. It wasn’t until later that I finally realized that the non-hamburger options on their Pirate Pak menu were just regular entrée items that were served on a regular plate (no gold coin, no ice cream). How sad! If I had known, I would have stuck with one of the hamburger options. Oh well, live and learn (and supposedly they were still going to donate $2 from my order) – Arrr! 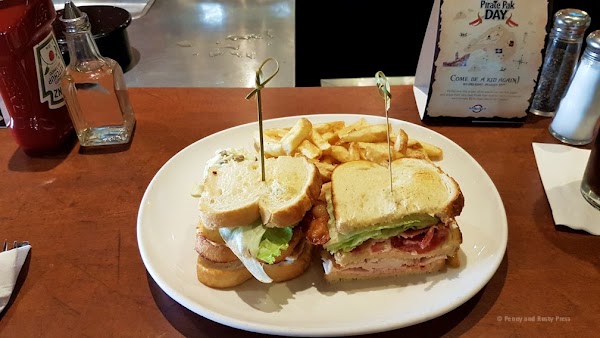 As for the clubhouse sandwich itself, it contained turkey breast, bacon, lettuce, tomato, mayo, and chili sauce on sourdough bread. As far as sandwiches go, it was adequate and came with their regular fries and coleslaw.