After an aborted attempt to visit another restaurant, I eventually wound up at Restaurant Yugo. It wasn’t a total loss because this place has been on my radar for a while now. Located on Main Street between East 26th and East 27th, this spacious restaurant serves up some seriously good (albeit somewhat expensive) Japanese items.

The menu here has a lot of options and kind of reminds me of Stem Japanese Eatery. I started out with some nigiri: King Salmon Aburi with Black Truffle ($9 for 2 pieces), and King Salmon Toro Aburi with Black Truffle ($12 for 2 pieces). One thing for certain is that these tiny pieces of nigiri aren’t going to fill you up. They are topped with a piece of black truffle which probably adds to the cost. While the salmon was fairly buttery, the small portion size made it difficult to really tell the difference between the king salmon and the king salmon toro.

On a side note… is it just me or is everyone calling this fish “King Salmon” now instead of “Chinook”? 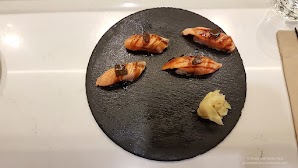 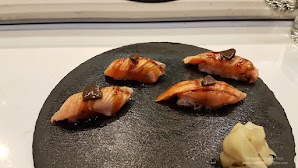 Next up for my dinner was the Hamachi Oshi ($16) which is 6 pieces of pressed sushi topped with hamachi (yellowtail), shiso leaf, ginger, pickled jalapeño, fried taro crisps and a miso mayo sauce. I liked the contrast of the buttery and crispy textures in this sushi dish. 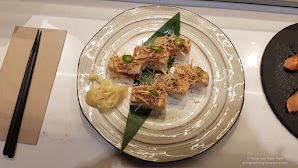 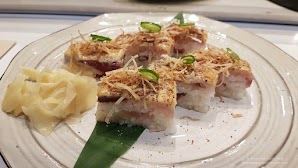 I also ordered the Grilled King Salmon Kama ($13) which comes with a salad that includes crunchy carrots and cauliflower and a tart vinaigrette which helps to cut through the fatty goodness of the kama. If I’ve learned anything about a good Japanese restaurant it’s that you can tell how good it will be by the quality of their grilled kama. Also known as fish collars, it’s not a dish that most diners will gravitate towards (perhaps due to the bones) but I love when I get a well-prepared version. This one was pretty on point and had a fair amount of buttery and oily flesh. Perhaps not as good as the one I had at Sushi Modo (which was also half the price) but good nonetheless. 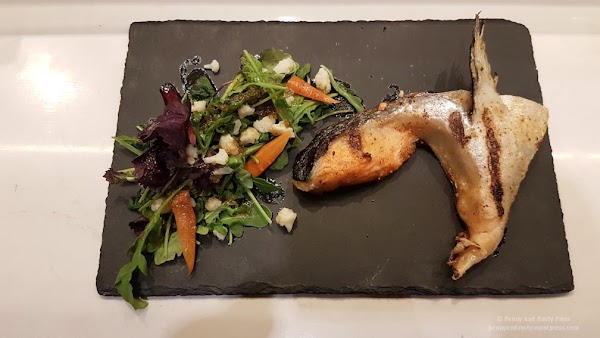 I returned to try their lunch menu but noticed that their lunch menu is much smaller and quite limited. The House Bento Limited ($18) includes 6 dishes picked by the chef… in this case, that meant grilled salmon surrounded by Brussels sprouts with bacon, tuna tataki, gomae, tamago, and a corn/squash fritter. I think this bento was just okay, nothing really stood out here. 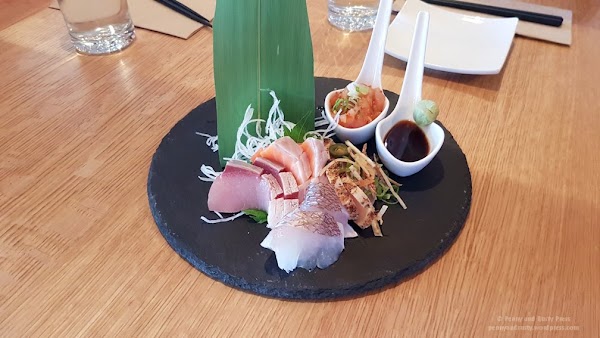 The order of Sashimi ($18) included the daily fish tartar (which was a spicy tuna on this visit), along with king salmon, hamachi (yellowtail), and a white fish which I think was tai. The sashimi was clean and fresh. 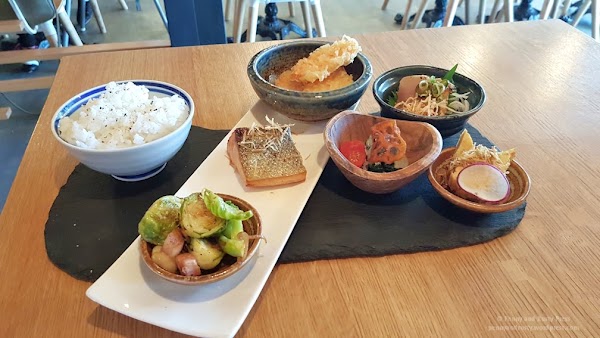 This restaurant serves up quality ingredients and seems to aim for the hipster crowd which partly explains the higher price point. If you don’t mind paying a bit extra, it’s a worthy choice for the variety of food that they serve here (just remember that the lunch menu isn’t as extensive).