My first attempted visit to Chengdu Spicy Restaurant didn’t go as I had planned (what else is new?). I’ve been wanting to try this little restaurant located at the corner of Wilson and Kingsway for a while now so I made a point to visit earlier this year. Unfortunately, I relied on the hours that were listed on Google (they didn’t have a website that I could find) and arrived just past 11:30am only to find that they were closed and the hours they were displaying in their shop said they open at noon (Mondays-Friday). So, after reporting the new hours on Google, I headed to another nearby restaurant and waited for my next attempt to try out Chengdu.

Finally, in early April, I managed a successful visit. Now, first things first… “Spicy” is right in their name so I knew to expect that most of their dishes would/should be spicy. If you don’t like spicy food… probably best to just avoid this place.

You know that it’s a spicy restaurant when they give you a free appetizer that’s drizzled with chili oil. The shredded cabbage had a nice crunch to the bite and I can only imagine that the cabbage would have been good to cut down the spice level of the other dishes if they didn’t drizzle chili oil over the cabbage. But if you like spicy food, this is a nice touch. 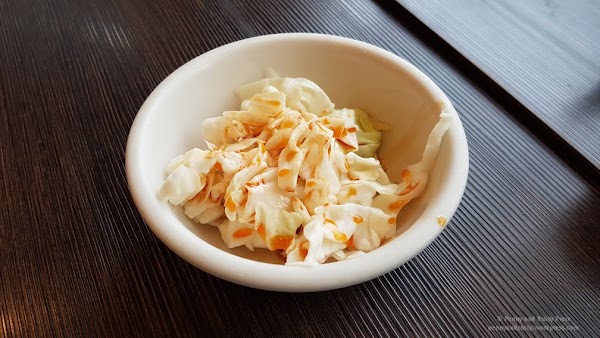 I wound up ordering the Chengdu House Special Tan Tan Noodles ($6.99) which is a dry-style noodle dish (as opposed to a soup noodle) and topped with some minced meat, green onions, and sesame seeds. The noodles had a nice chewy, toothsome texture and the peanutty-like sauce on the bottom of the bowl added a mild spice level once you mixed up the noodles. 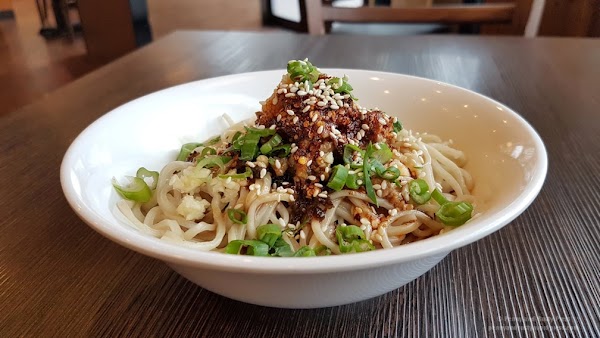 As the waitress had mentioned that the noodles were a small dish, I also decided to try some of their wontons. Originally, I was going to order their House Special Wontons but she said that they weren’t spicy so I ordered their Spicy Wontons in Chili Sauce ($7.99) instead. The wonton had a velvety soft wrapper and were swimming in chili oil and topped with green onions, sesame seeds, and garlic. While I found the spiciness of this dish to be a bit one-dimension from the chili oil, they were pretty good. They have a number of wonton and dumpling dishes… it’d be nice to try some of their other varieties to see if they have more flavour. 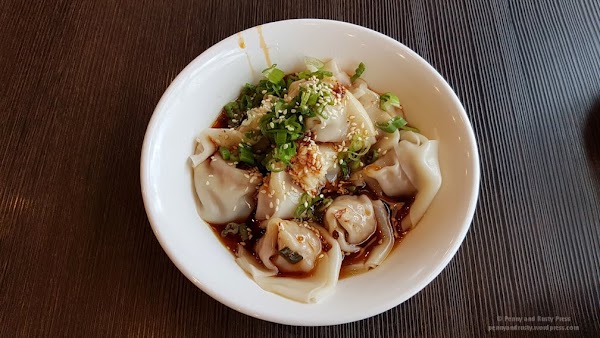 Overall, a fairly good offering here but I think I’ll need to try some of their other dishes to be sure. 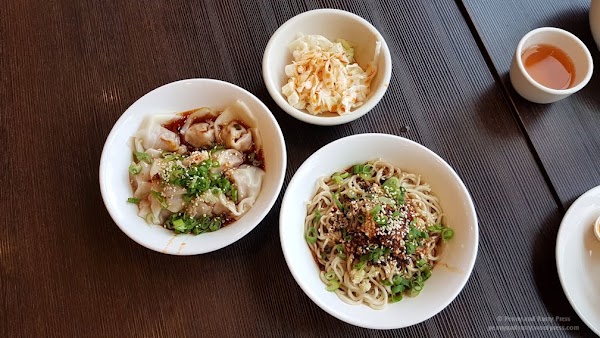 I did try coming back to this restaurant but I’ve noticed that they aren’t always open when they say they’ll be open. For example, on the weekdays, their sign says they open at noon. However, on more than one occasion, I’ve been here at noon and it’s not open. I’ve seen some people standing outside the restaurant waiting for it to open… I’m almost thinking that those were the people that worked there and they were waiting for someone with a key to show up. In any case, after an aborted attempt to visit (where I wound up going to nearby Bubble World), I ordered their Tan Tan Dumplings in Peanut Sauce ($7.99). 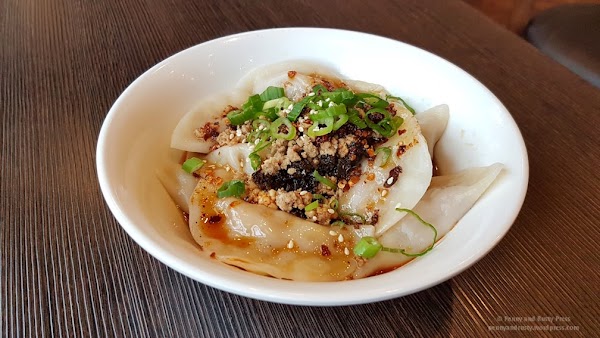 Strangely enough, the sauce didn’t taste much like their tan tan noodles dish. The sauce was a bit spicy from the use of chili oil and had very little peanut flavour. The half moon shaped dumplings were okay but they suffered from the same one-dimensional flavour that their other dishes possess.

If you’re a fan of chili oil, you might enjoy the food here… otherwise, the flavours get tired rather quickly. Cash only for totals under $50.