Arisu is one of the typical Korean restaurants that you’ll find along the North Road corridor between Burnaby and Coquitlam. This particular location is on the second floor of a mini mall above the Hannam Supermarket.

Arisu is fairly large in size but the interior is rather dark and dimly lit. At my booth, there was a small inlaid tv in the wall playing some type of k-pop video (although the sound was muted so it was difficult to tell). The menu here, like at many Korean restaurants, is geared more towards larger dishes which are shared among the table and there’s not a lot of dishes that cater to single diners.

After ordering my Bibimbap ($9.95), they brought out some banchan dishes comprised of stewed potatoes, broccoli, kimchi, and a green salad with a blueberry-like dressing. 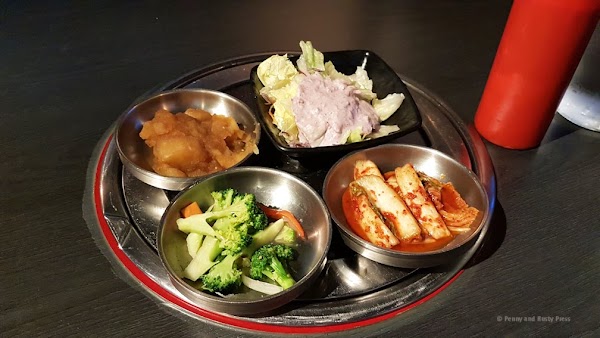 I was disappointed when my bibimbap arrived as the menu said that it was served with a raw egg (and the picture in the menu clearly showed a raw egg) and what arrived was a fried egg. The egg yolk was somewhat runny but it was not the same (I hate when menu descriptions aren’t accurate). Supposedly, there was beef in this rice bowl but I didn’t really see it (perhaps it was under the fried egg). In any event, I mixed it up with some gochujang (a sweet and savory hot sauce) and the rice bowl was somewhat okay. 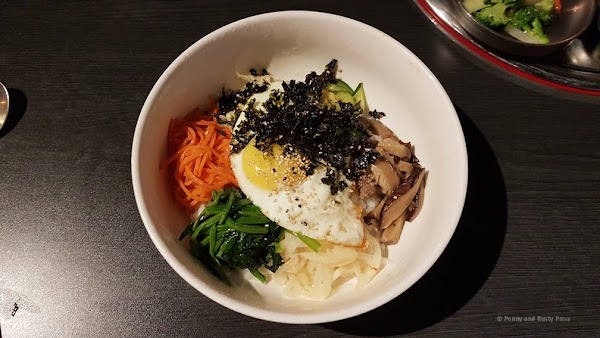 They also have dolsot bibimbap (ie. served in a hot stone bowl). I wonder if they would have included an actual raw egg if I ordered the dolsot version? Or maybe they knew that I wasn’t Korean and thought I might not want a raw egg in my bibimbap?